Since the refusal from Guinness, our route has been a little random, to say the least. I’m trying to make the most of our time and show Egle some of the best parts of the country I can but also avoiding fires, rain and cold…the last one I failed on this week, you’ll see!

Before leaving Moab a ride thru Arches is a must, so…

riding back thru the park we passed Graham Francis, we’d been talking via the internet for years since we both were riding an XT660Z, now we both have XT1200’s, he was in the US for a couple of months touring around, small world! He came over and stayed with us for the night

We got an invite from D-Train for Egle to do some training with W38M in their intermediate/ advanced off-road course and I offered my services to shoot the proceedings, so instead of ever westward we turned back east and headed for Ouray…via a little dirt of course 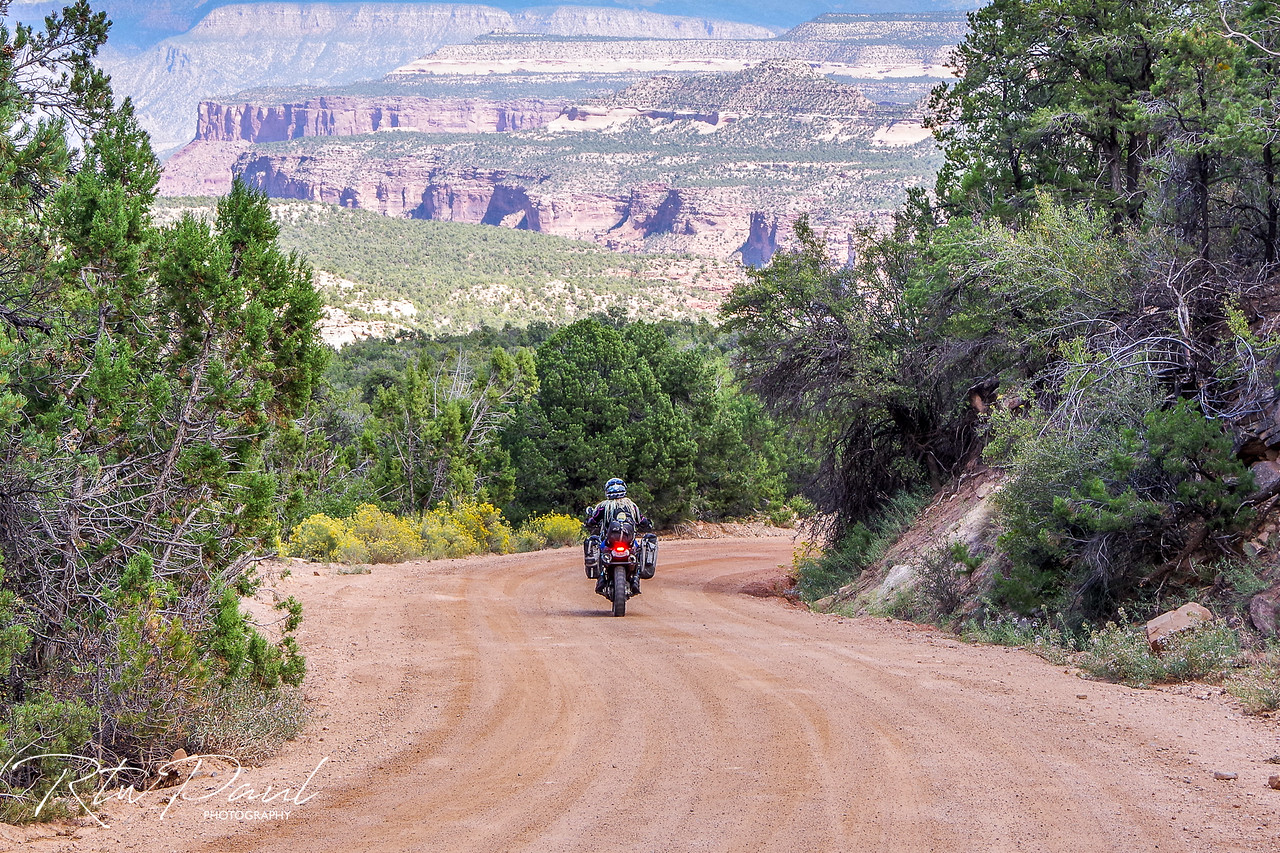 Our route took us over Hagerman Pass where the hydraulics had failed on this equipment right in a perfect spot! 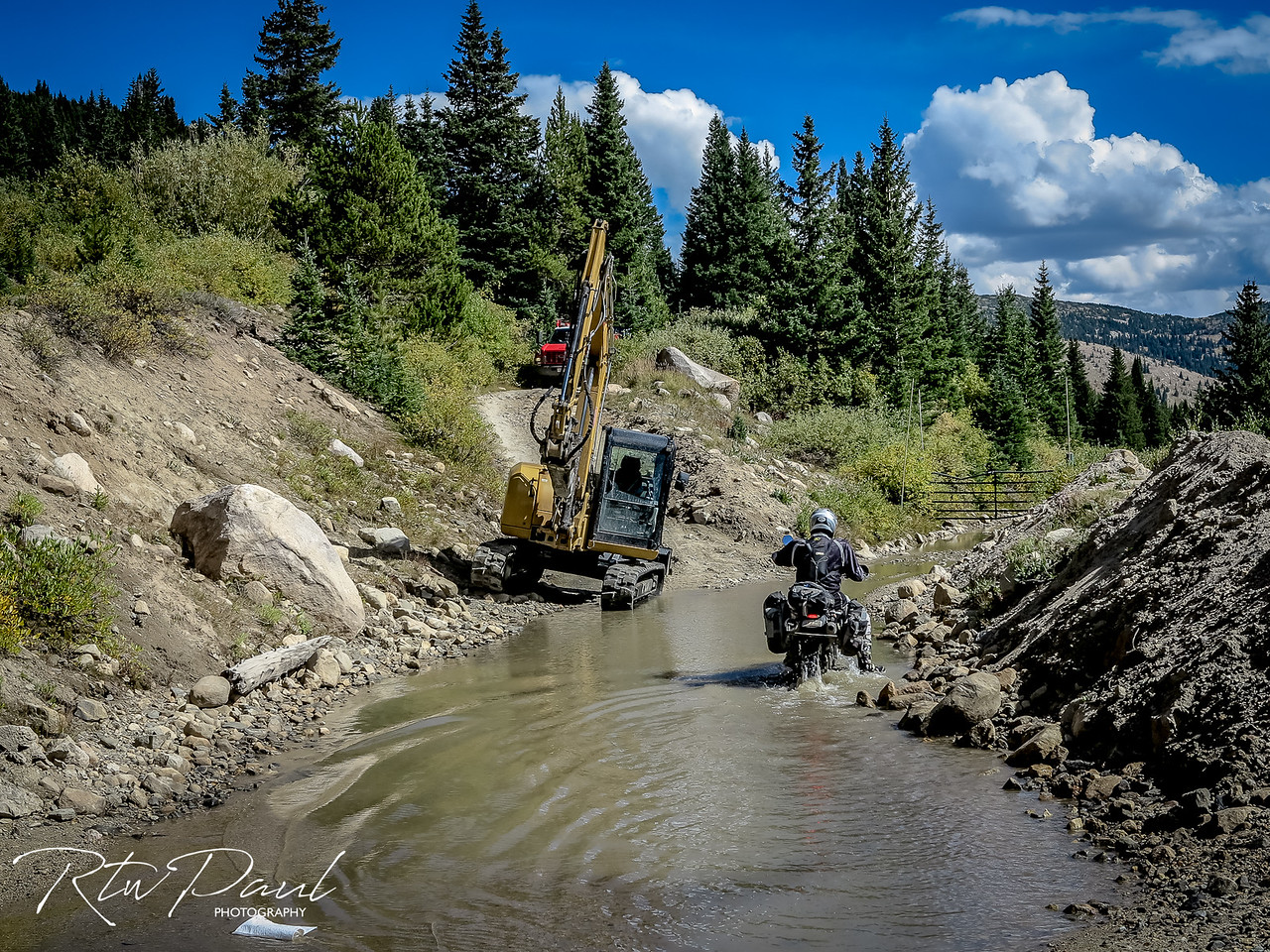 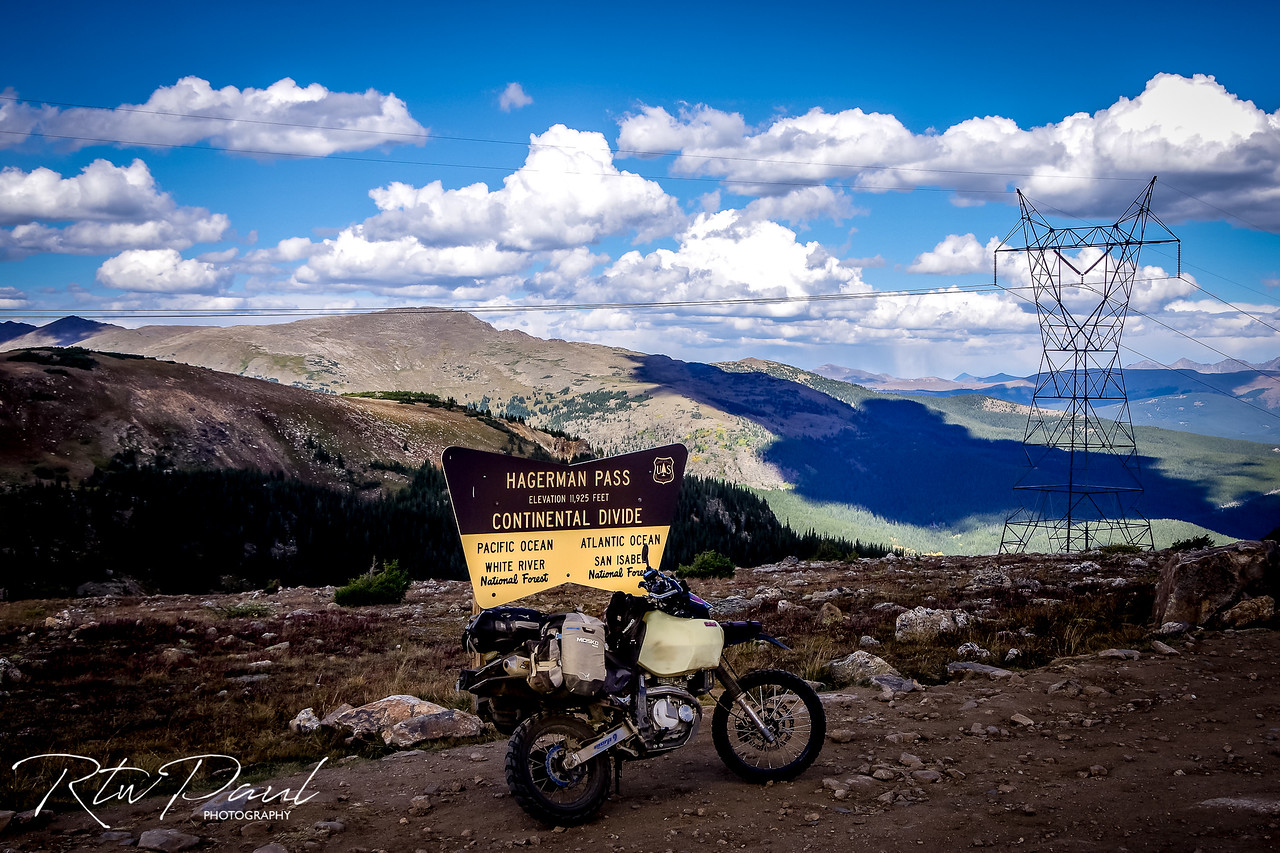 ATV’s and side by sides have really exposed the rocks a lot on this pass, the climb was interesting having to read the line way ahead so not to get caught out, but on the eastern side, it was a lot smoother… 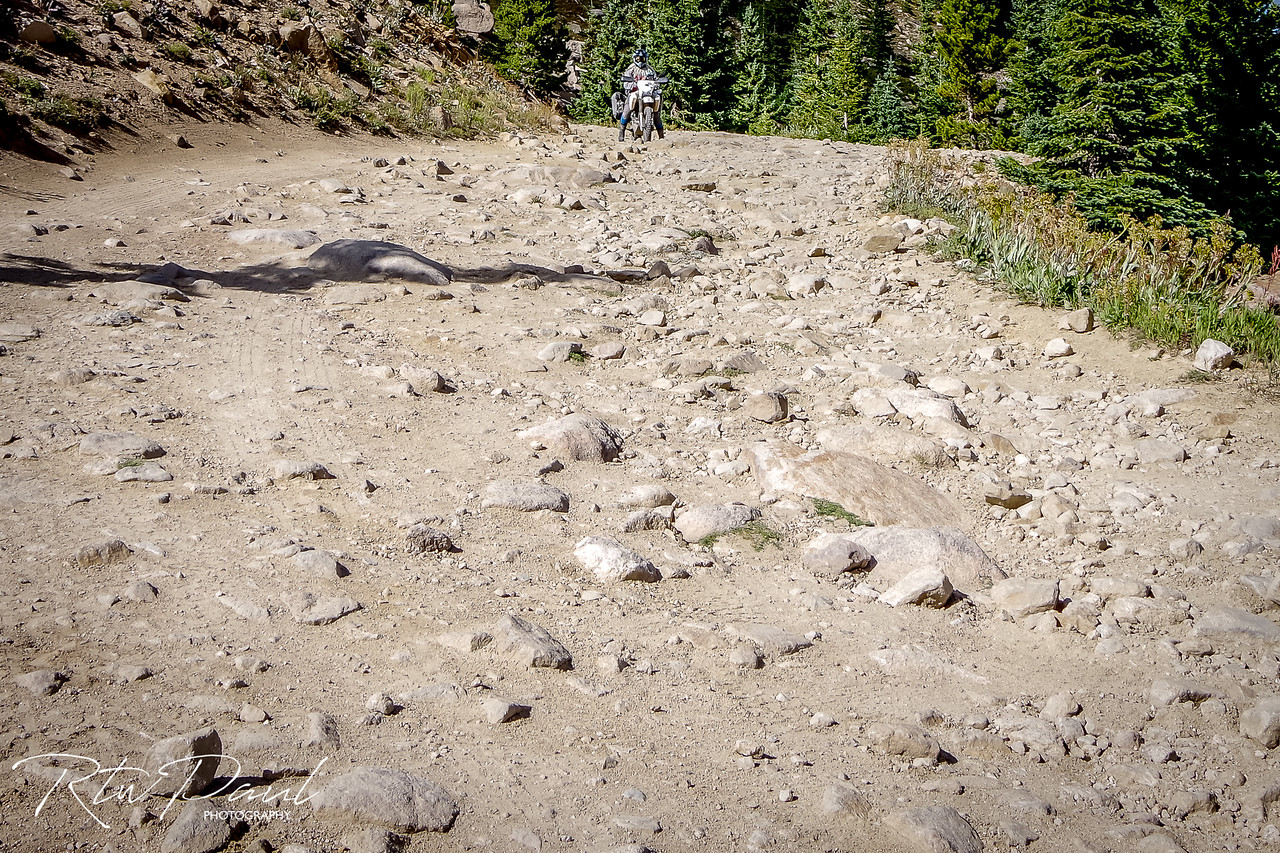 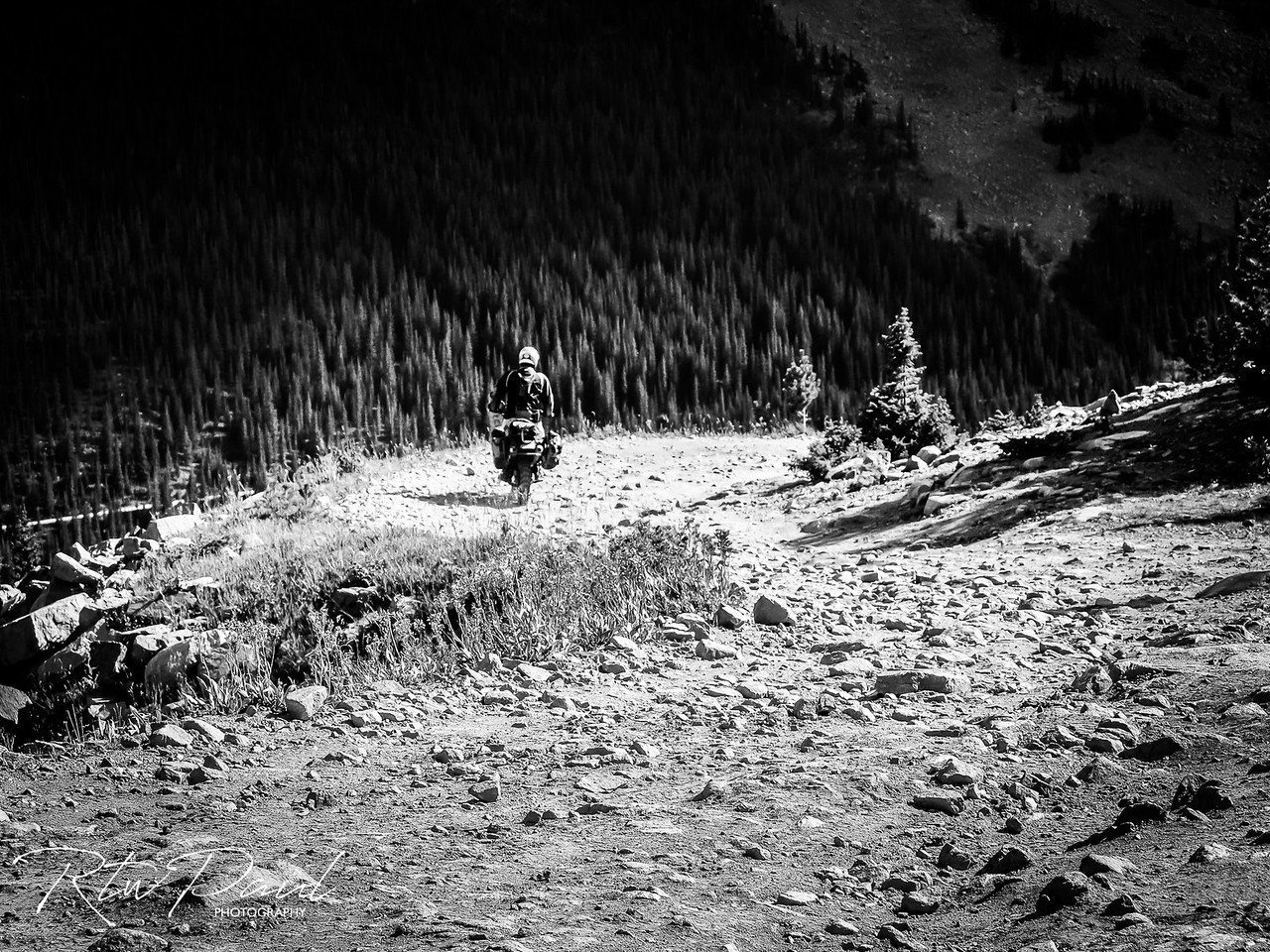 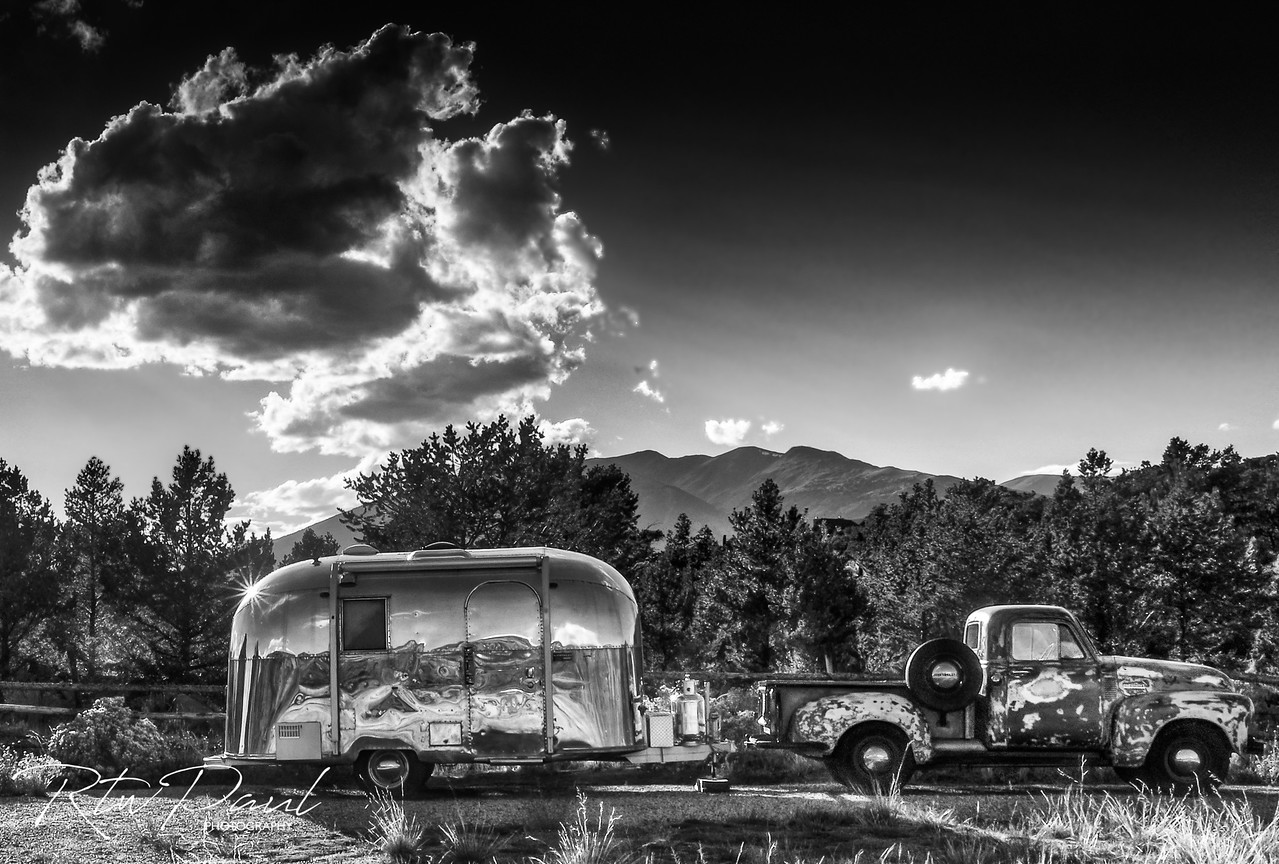 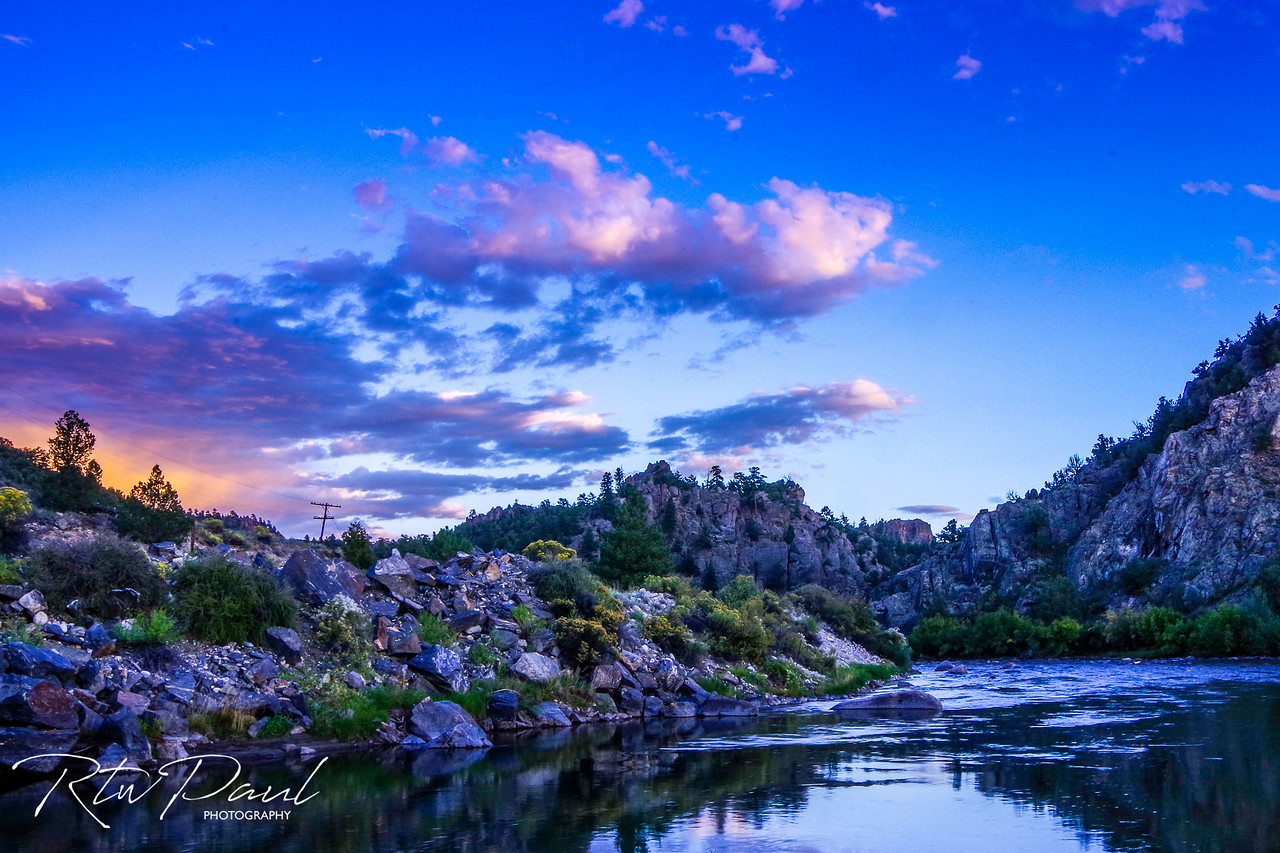 Up we go again

Afternoon storms are a big thing in the fall in Colorado

That night we stayed in Lake City, the previous night a bear was wandering down the main street with two cubs, some genius in an RV from Texas who was cooking came out to take a photo but left their door open, where did the bear go…straight inside with the two cubs, the Texans had to change plans and eat out for the rest of their stay! I laughed at this but karma will kick in…

During the night there was torrential rain which made us wonder what was happening at the top of Engineer, you guessed it snow! 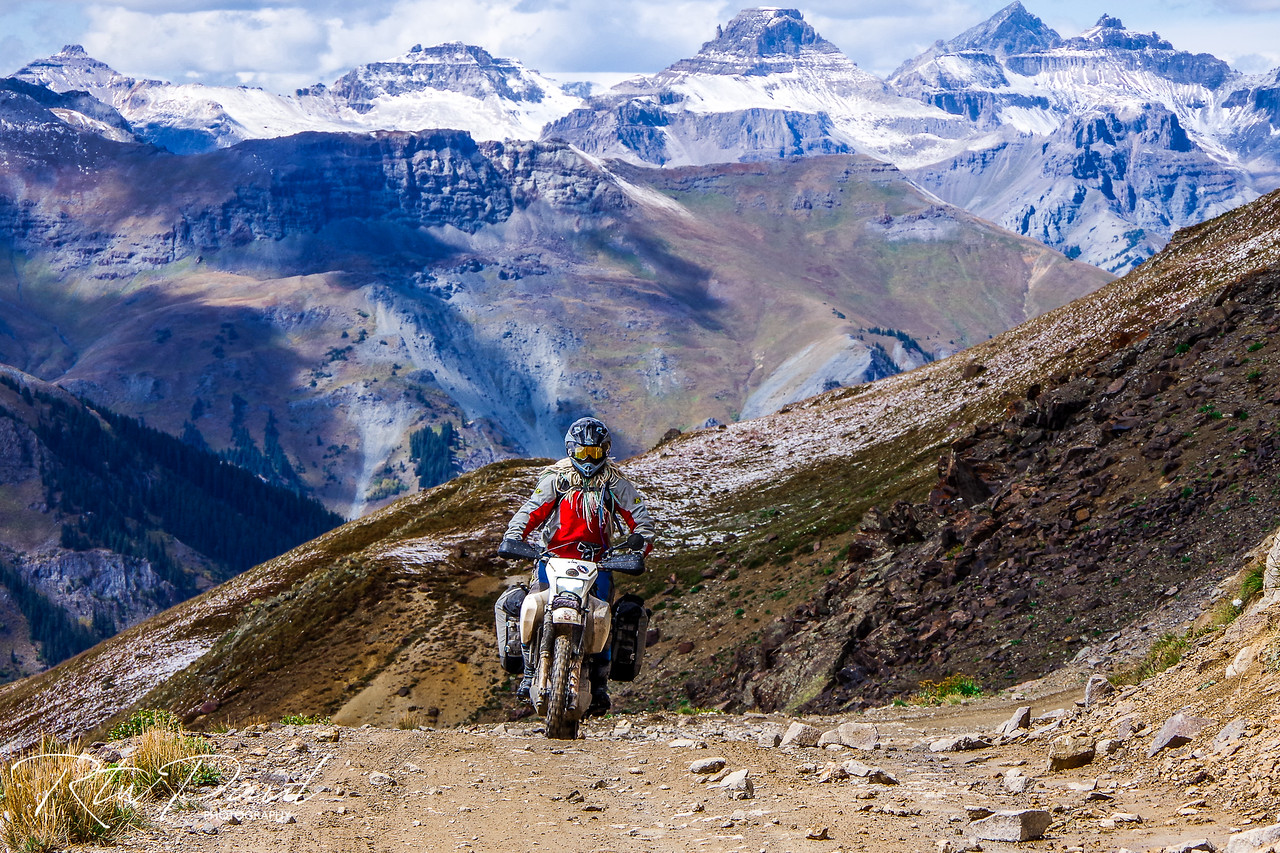 A little lower down at the start of Mineral, no snow but wet, and if you’ve gone up or down that section you know the amount of steps and sheer drops, it’s a hard slog so add mud and the concentration level is very high 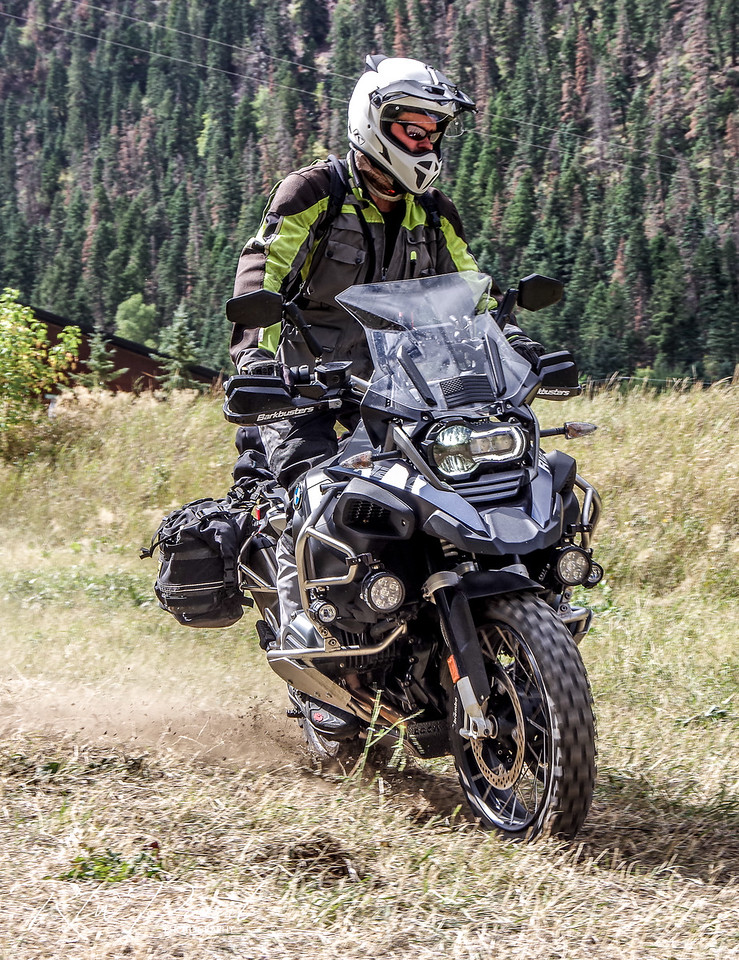 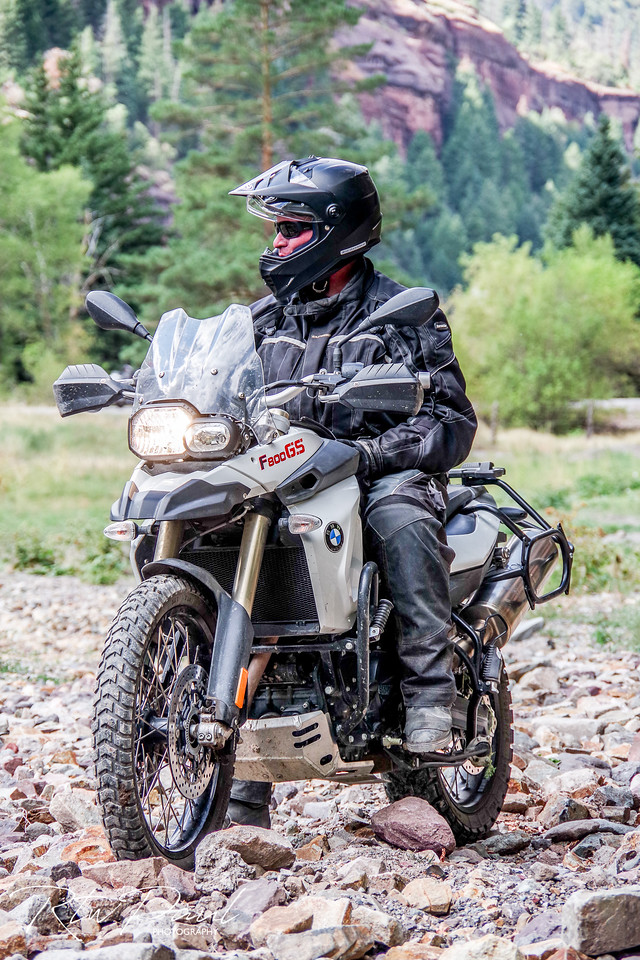 After a day or power slides, loose shale training, drifting etc the following day it was a chance to go into the real world and see if they were listening and had found new skills?

We arrived at the meetup point a little late because we had a BEAR attack Egle’s bike trying to get half a cucumber we’d forgotten in the bottom of the Mosko’s, all our other food was secure hundreds of yards away but just that ‘one’ thing. Black Bears are predominantly vegetarians if you didn’t know

The bear came into the camp caught a scent and pushed Egle’s bike over from the right down on the kickstand side and then stood on the bike and was attempting to tear into the luggage.

Now, this where you have to use your imagination – It’s around midnight/ 1 am, for the last few hours the guys who’d put his tent ‘near’ us was sawing logs (snoring very loudly for non-Americans) we both couldn’t sleep so we put in earplugs. We DID NOT hear the bike fall over, we DID NOT hear the bear trying to tear into the luggage.

‘The snoring man’ HE DID, the bike landed about 5 feet from his tent, he stuck his head out to see what was going on, couldn’t see a thing (it’s dark remember) grabs a flash light shines it in the direction of the noise – and a bears face is FIVE FEET away!!!

The way he described the experience is this – “when I shone the light it went right in the bear’s eyes, we stared at each other for what seemed like an eternity, the black bear I guess about 5 feet long about 300-400lbs, was standing on the bike and trying to rip the luggage apart with its teeth and claws. I froze, then shouted out a bears trying to eat that Mosko, and then it just casually walked away. I’m from the east coast I have never seen a bear in real life, never thought I’d see one this close….FUCK this place I’m moving to a log cabin or a hotel room for the rest of my time in Colorado!”

I posted this on FB but not in this detail and there were the obvious stupid comments (its FB) but one guy said he had his hard aluminum panniers ripped open by a bear! You know you see other companies show their bags being thrown out of a truck window and the like, or down some stairs…Well Pete @Sideoff don’t bother with ANY of that we have put Mosko to the ultimate test in the wild and Mosko Moto passed with flying colors…we ate the cucumber for lunch

The damage, outer bag is done but inner shows teeth and claw marks but no real penetration 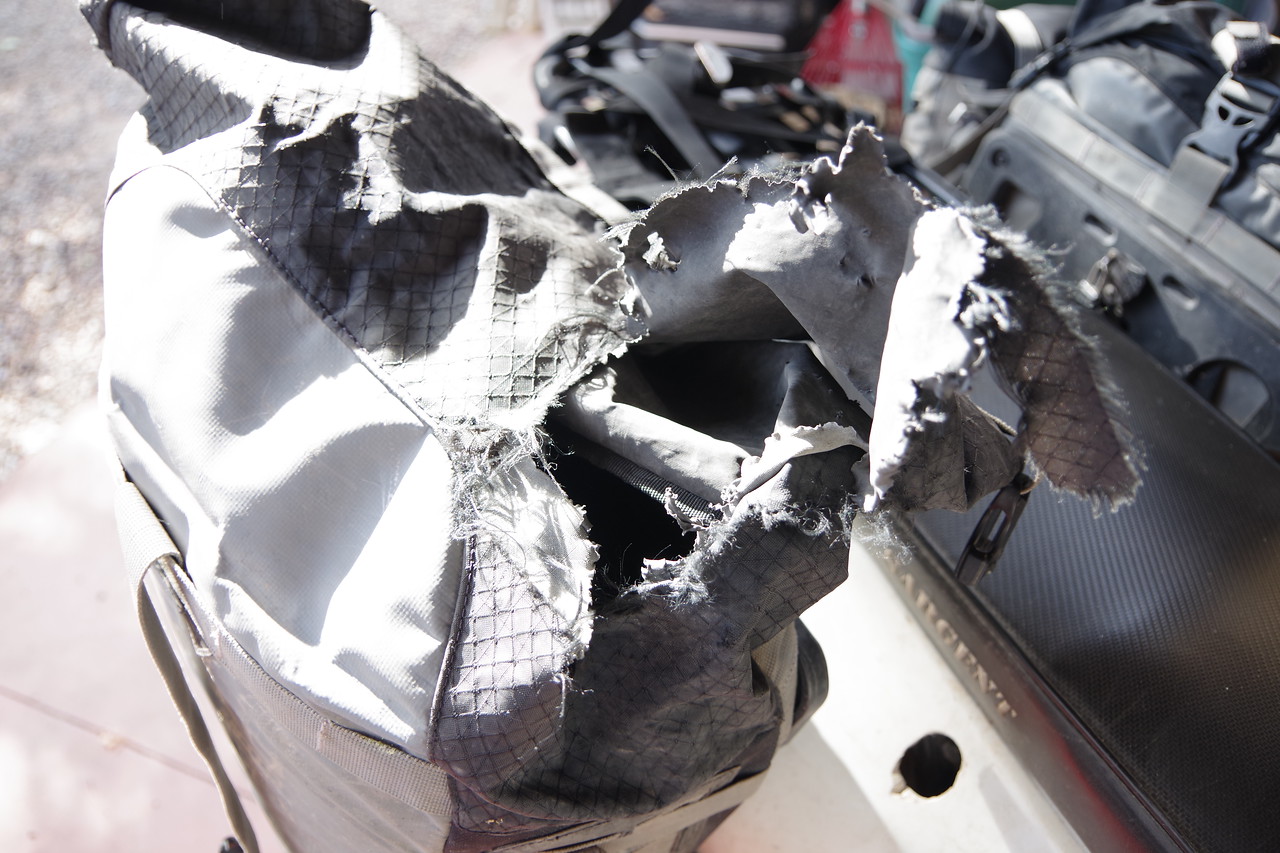 We left town and climbed Corkscrew from the Ouray side then Hurricane and California, if you’ve ridden those from that direction you know what these guys on these big GS’s were feeling like when they reached the top, a few dropped and dented bikes, bruised egos and serious forearm pump but they all made it…one guy had been riding 4 weeks, total, EVER!

He’s in the middle with a huge smile on his face, well done Chris 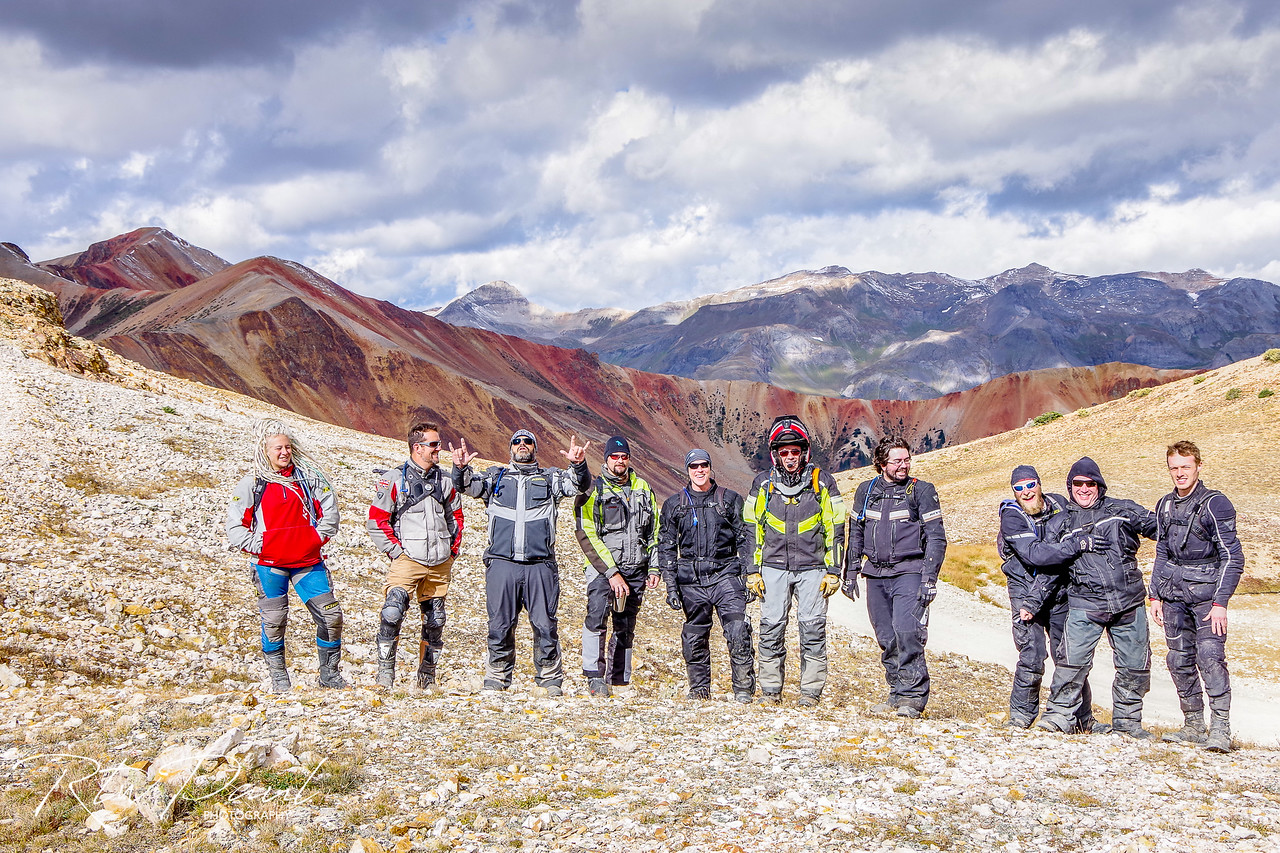 what goes up must come down… 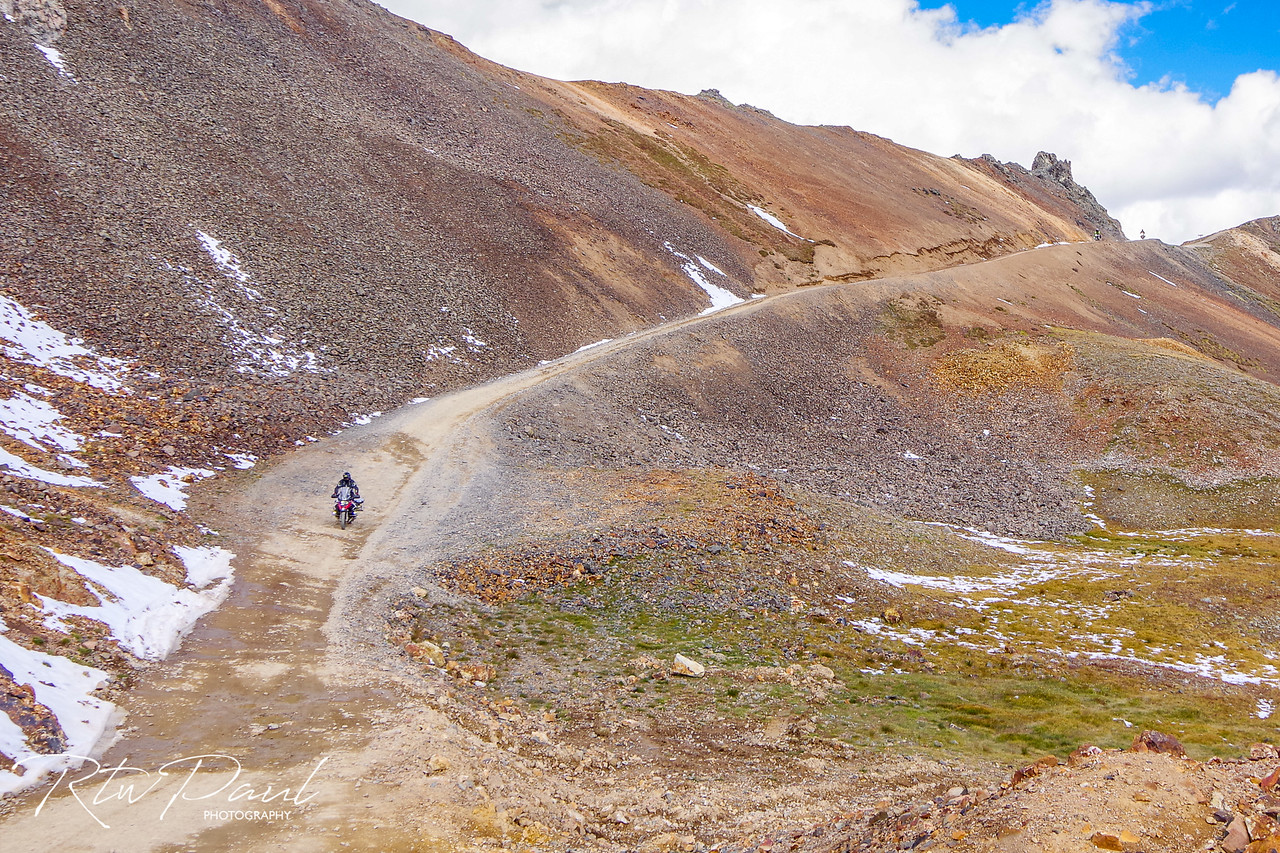 After all, that climbing life was getting easy until Dusty took the guys on a very unassuming trail, here 37.912305, -107.696426 that has a climb of maybe 20 feet but steep and in the rain, it took its toll and Mosko bags were getting tested to their limits (again) @Sideoff

For those of you who may be wondering, as there seemed a little concern for her where we would be riding Egle completed the course in its entirety and was one of the only riders not to drop their bike in training or in the real world, she can ride, she can really ride…so if you are a guy who uses the phrase “ride like a girl”, in this case, it means you are one hell of a rider….Dusty, agreed?

For us, project completed, photos taken, interviews done we headed back to Moab to resume our journey down my favorite ‘view’ Ophir 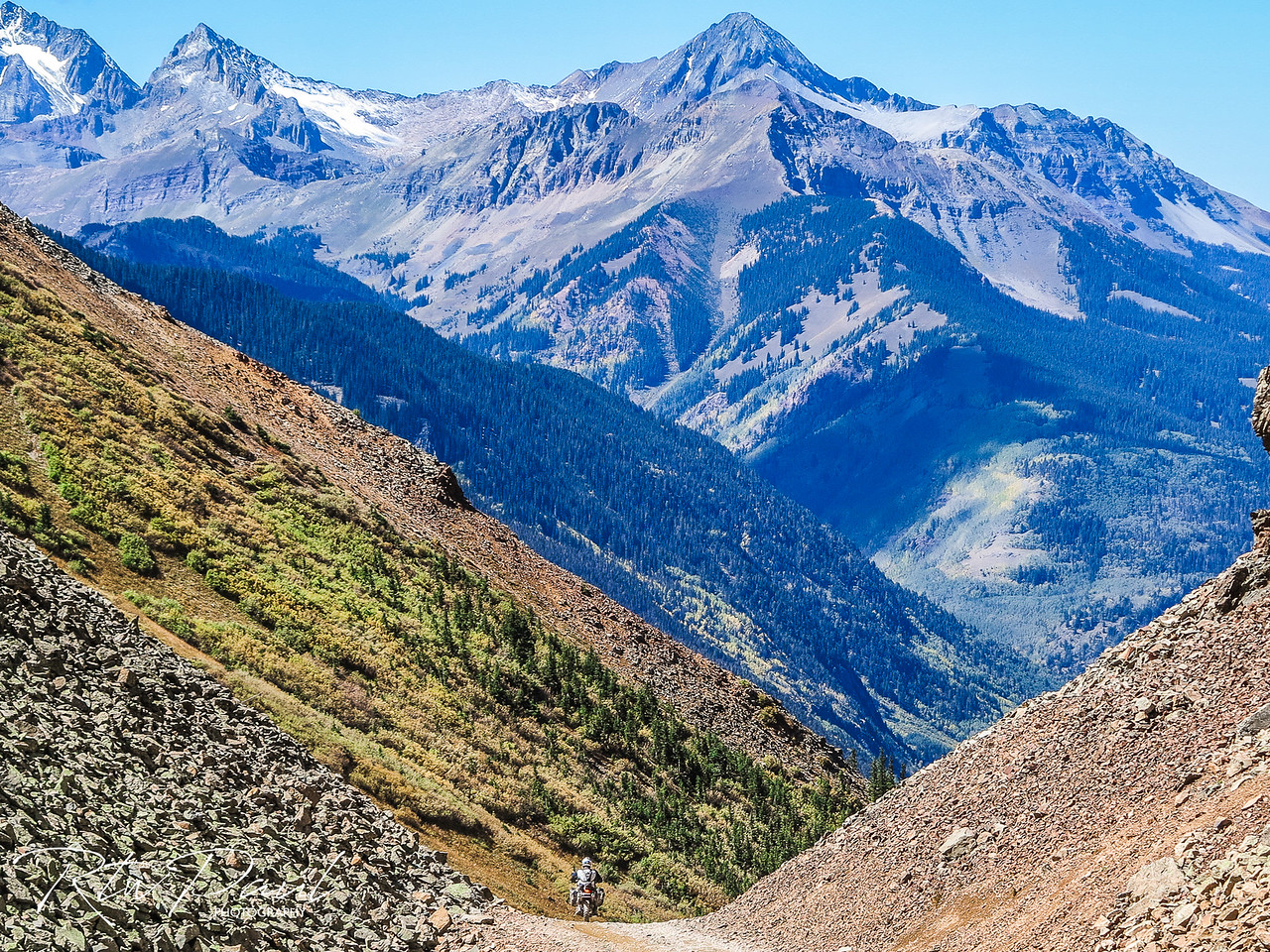 We will resume the dirt and TAT from here

5 thoughts on “Mountains, Dirt Roads, Snow…oh, and a BEAR Attack!”