Having lunch in a tiny little Puebla we look at the map to see where looks like an interesting route, we are sitting looking south and find a place called Pallasca, it’s taking the 3N and it looks to have a crazy section.

The towns are sleepy and lost in time 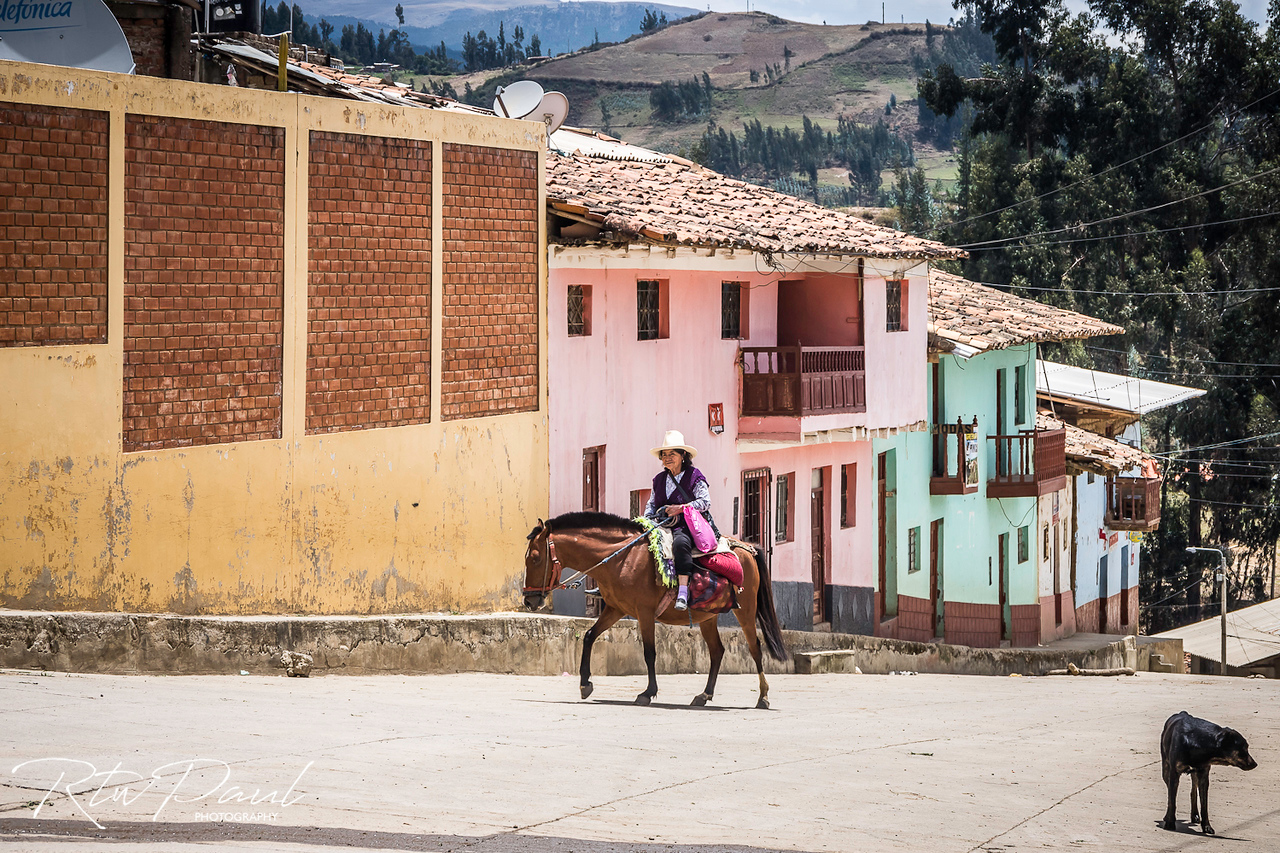 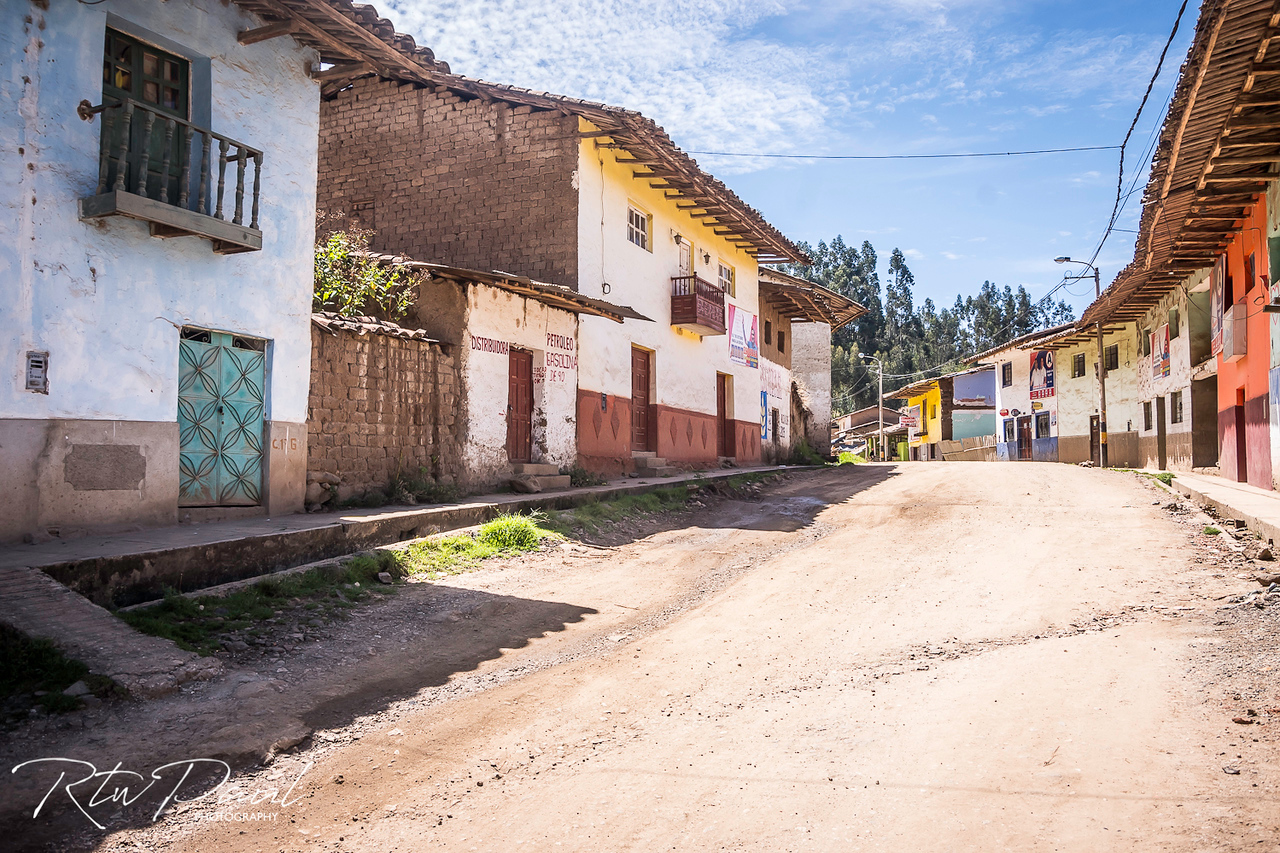 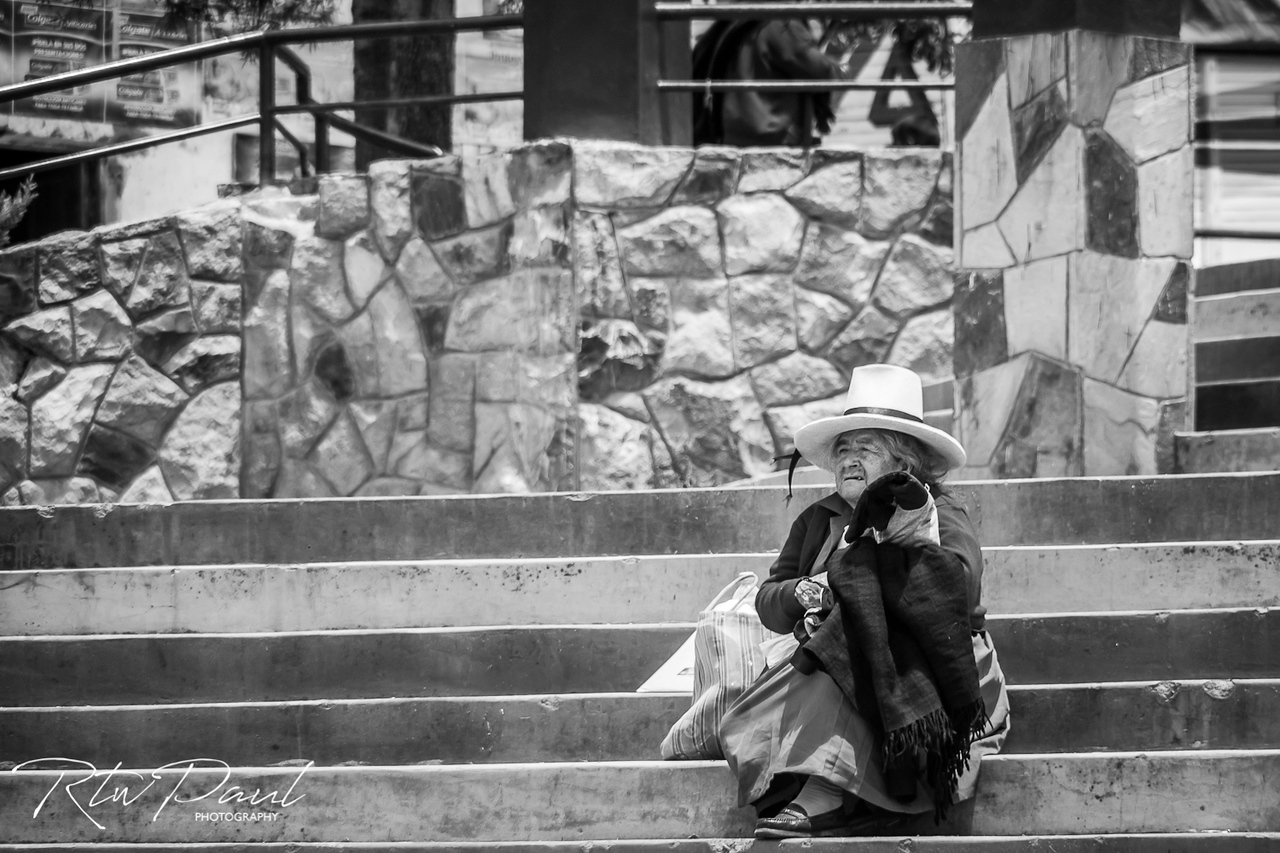 Education in these areas still isn’t great, most buildings are covered in political slogans and names, but to help the illiterate, which there are still a great number, images are used for the voters to understand where to make their ‘X’ 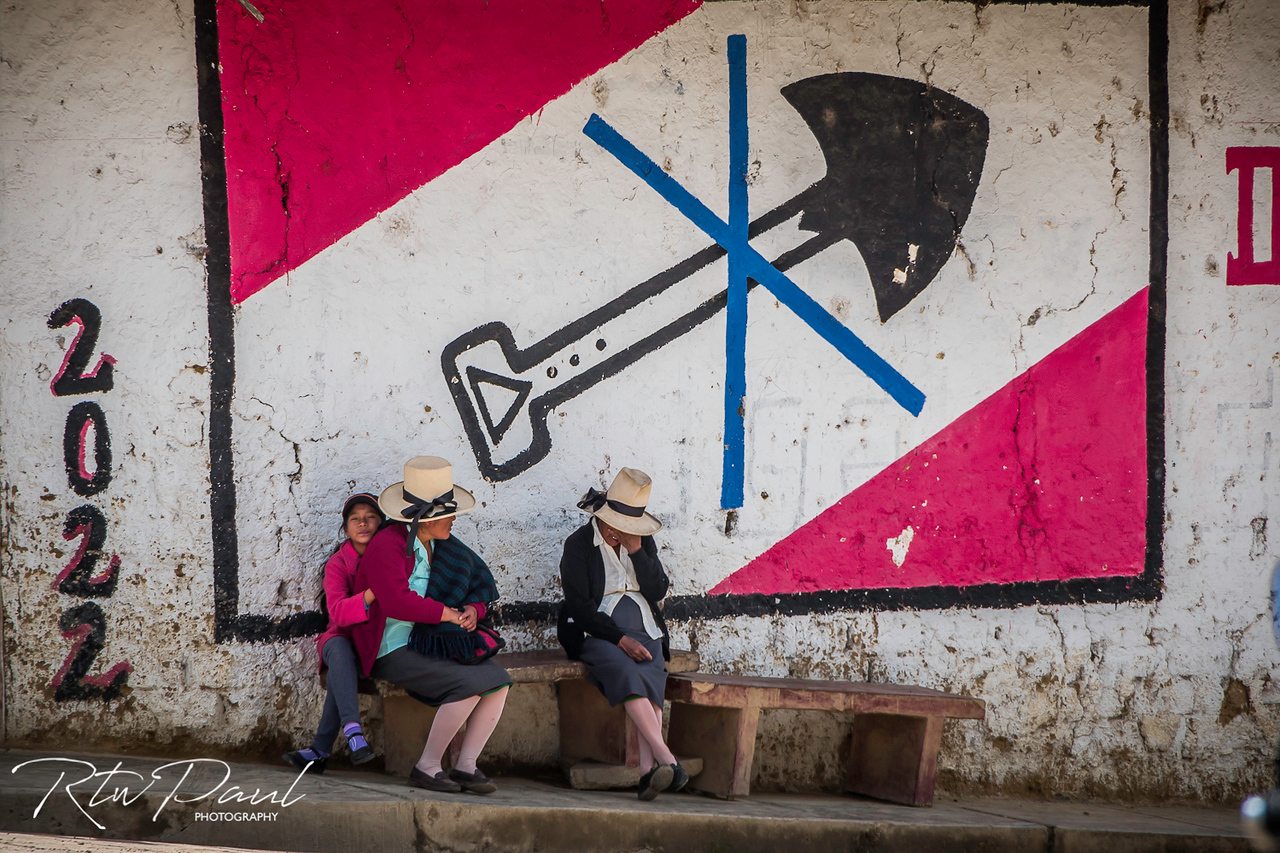 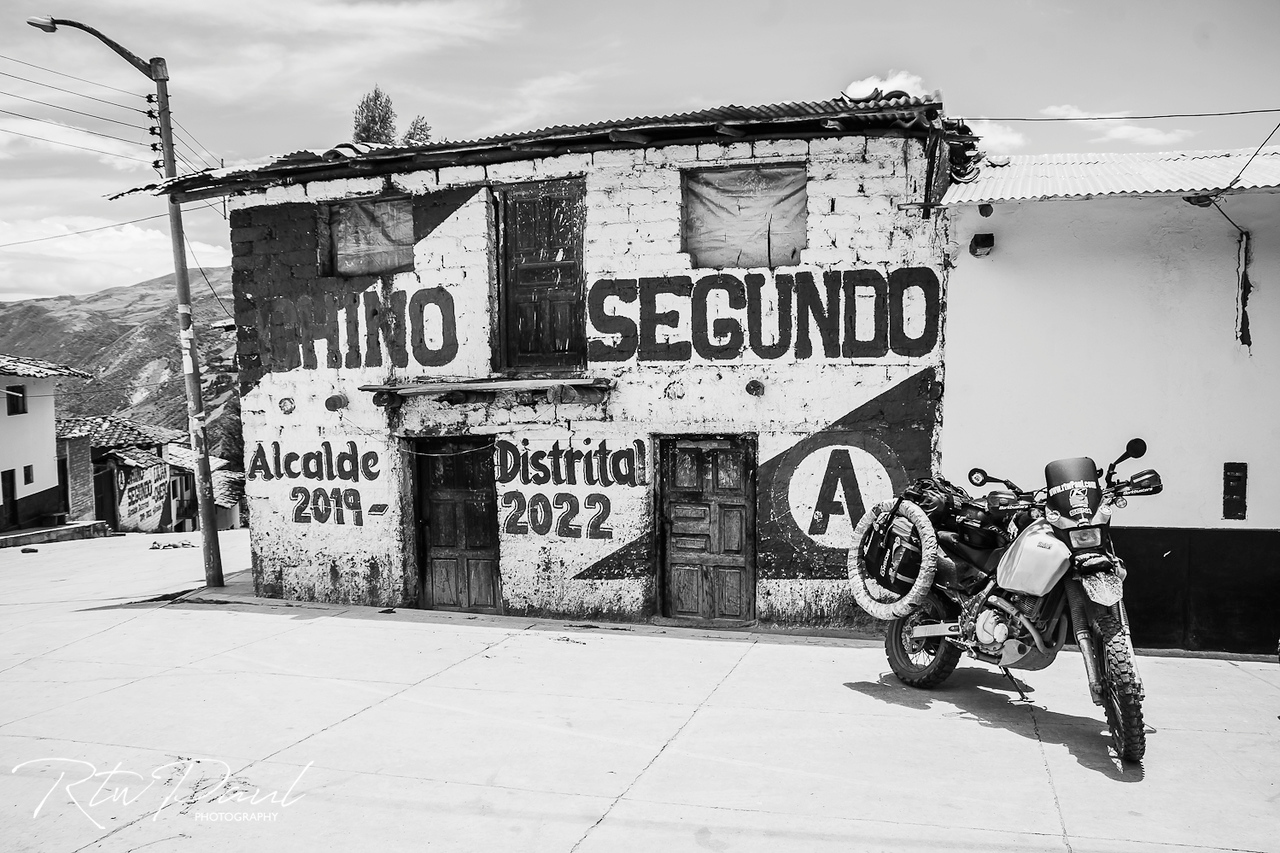 every corner is a view and at times we feel we could cover as much ground if we were walking, you just need to tell yourself no for some of the shots otherwise we’d be lucky to make 20km per day 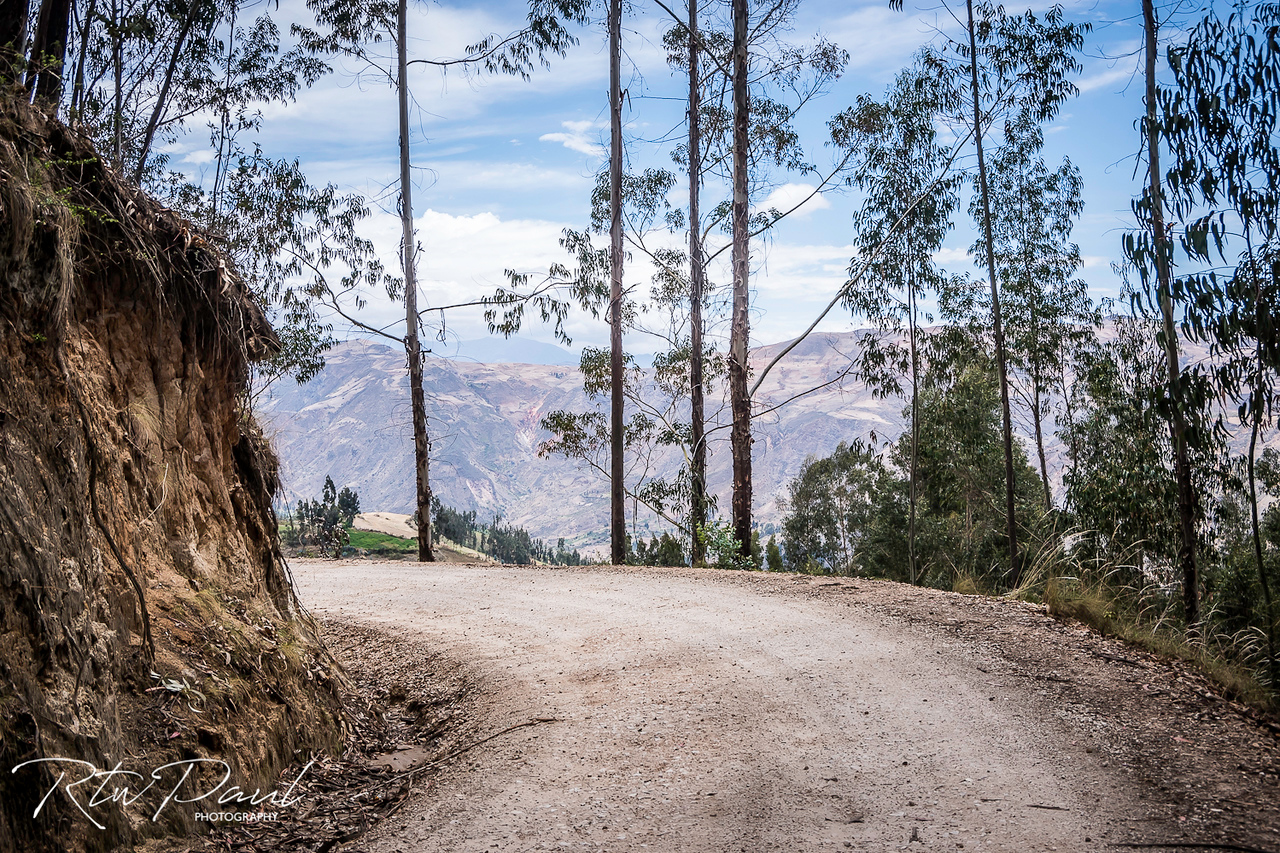 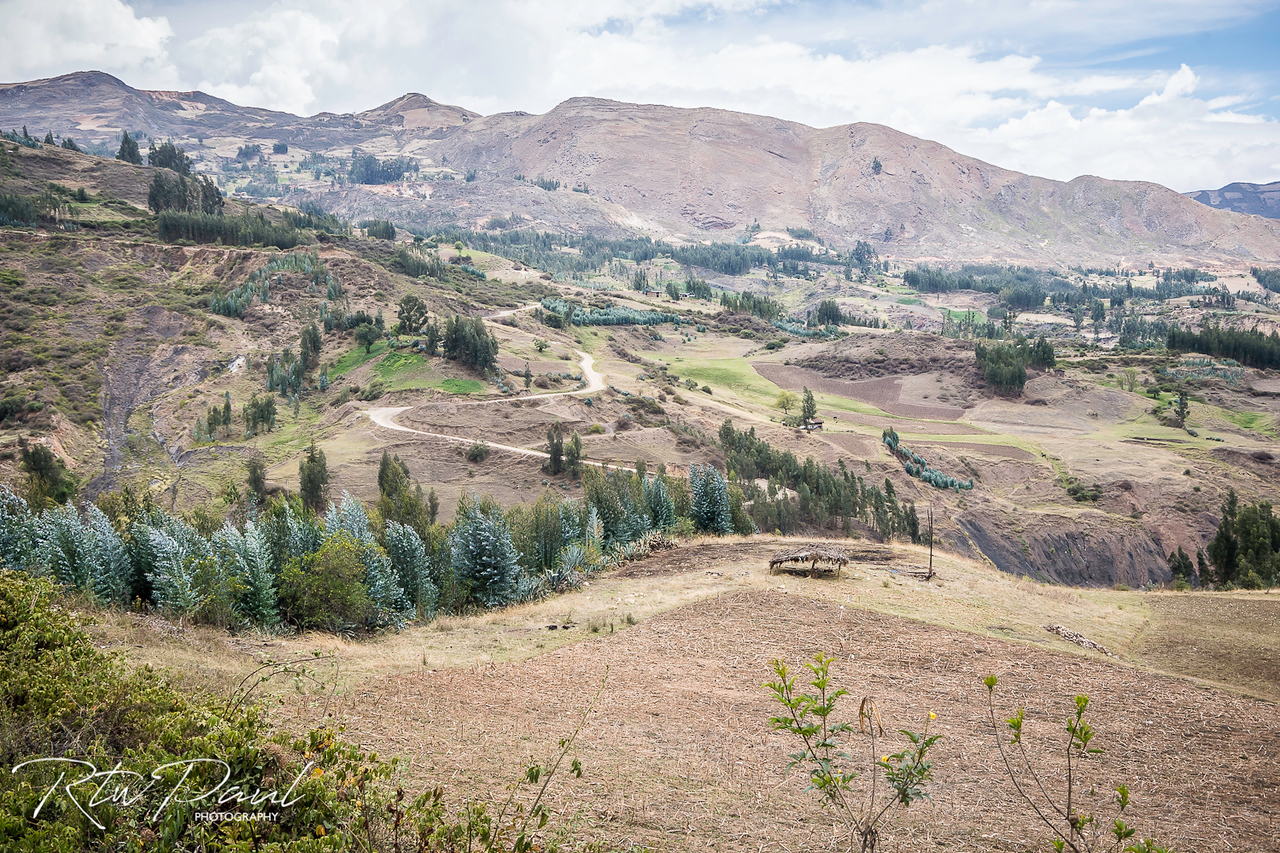 in these little Puebla’s every blind bend there could be something so you just take it slow, there are few cars but right now loads of pigs 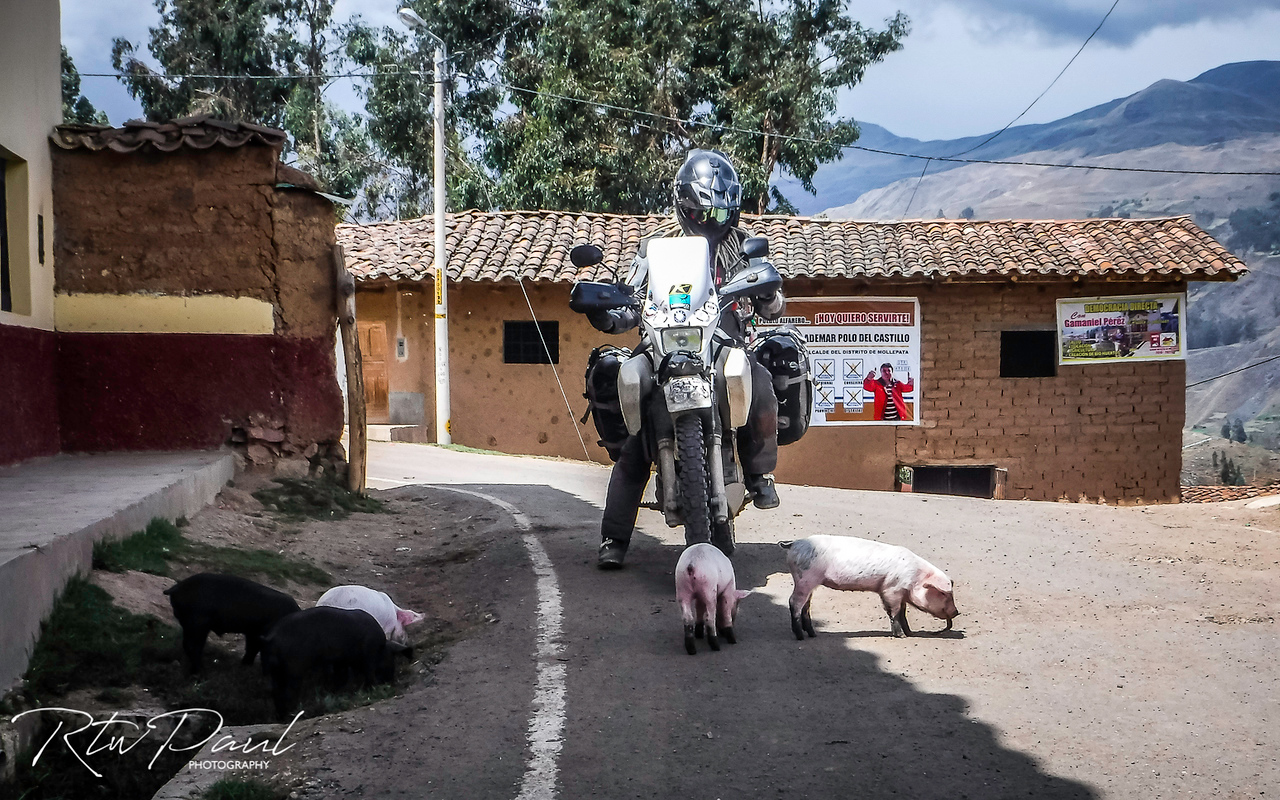 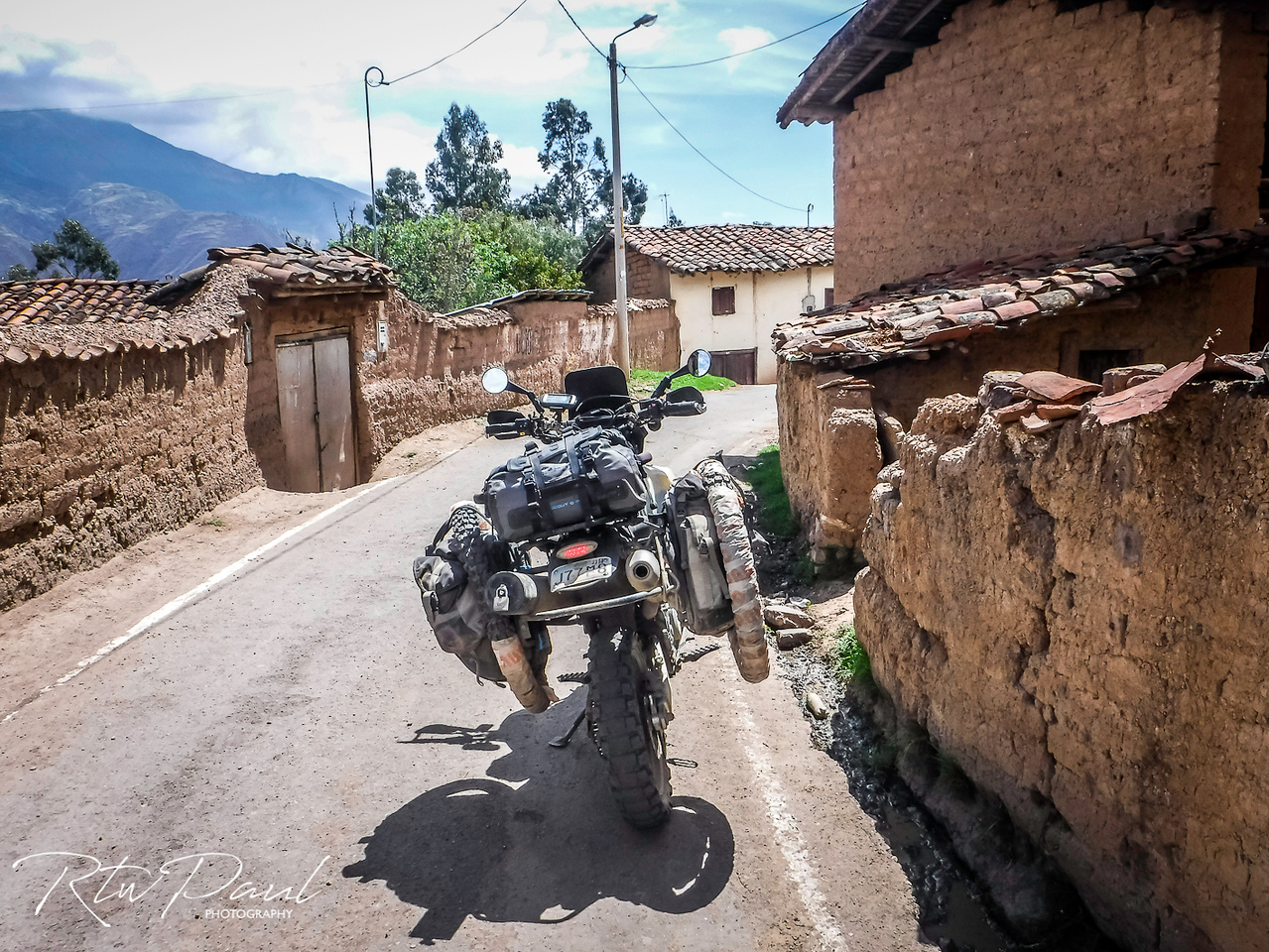 we round a bend and see this…

this is what you ride Peru for, but it does make you think who the crazy nut job was who built these roads…we are about to meet him, one of Peru’s finest 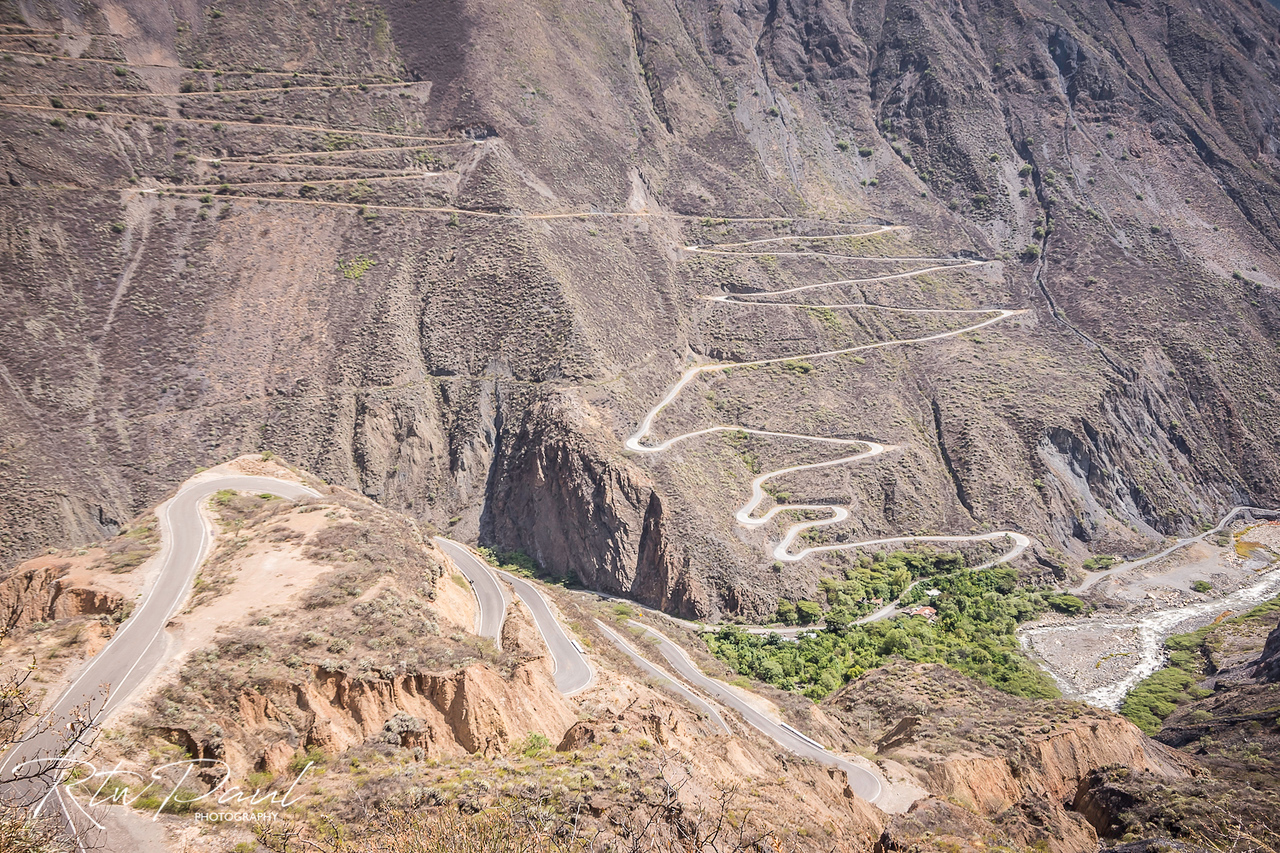 I’ll talk about him in the next post but wouldn’t you like to shake the hand of the man who dreamt up this masterpiece?

There are three small hotels/ hostels on the main square, two potentially have bike parking, the first one we enter there is only a cleaning lady walking around and she tells us she can’t rent us a room without the owners permission…and they are out with their cows and she has no idea when they’ll be back!

As we come out Egle heads off for ice cream and a man approaches me and tells me the same story about the hostel owners just left for their cows, so I should come and meet the Captain, he has loads of rooms.

The man walks me over towards a large green door of a building that is attached to the right of the church which he points out was build in 1650. 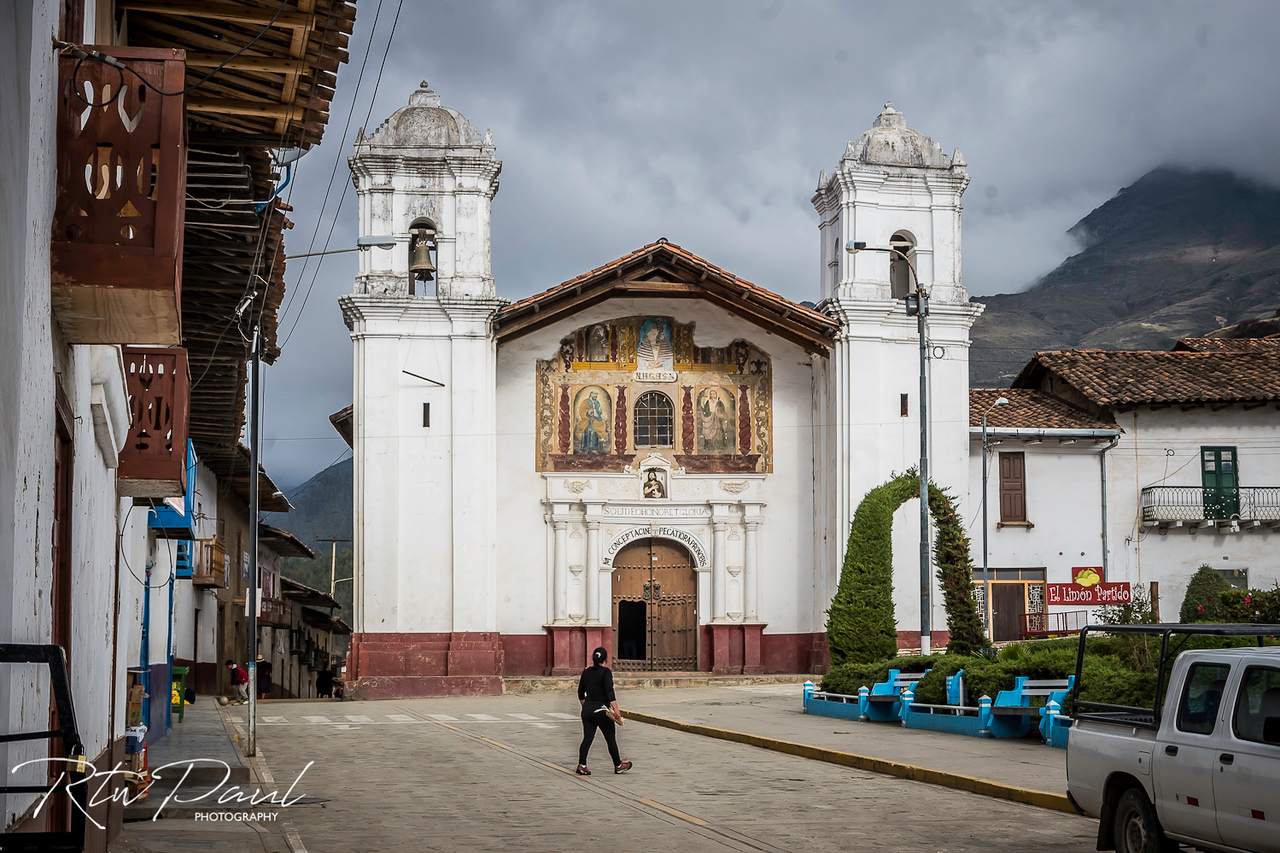 Inside an older man approaches us, he tells me a room is 15 soles/ $4.45 for one night, he points at a door, I look inside and tell him we have motorbikes, “not a problem, I’ll open the big door park them here, very secure.”

I go back outside and Egle is looking for me with ice cream, we finish up and ride the bikes inside. 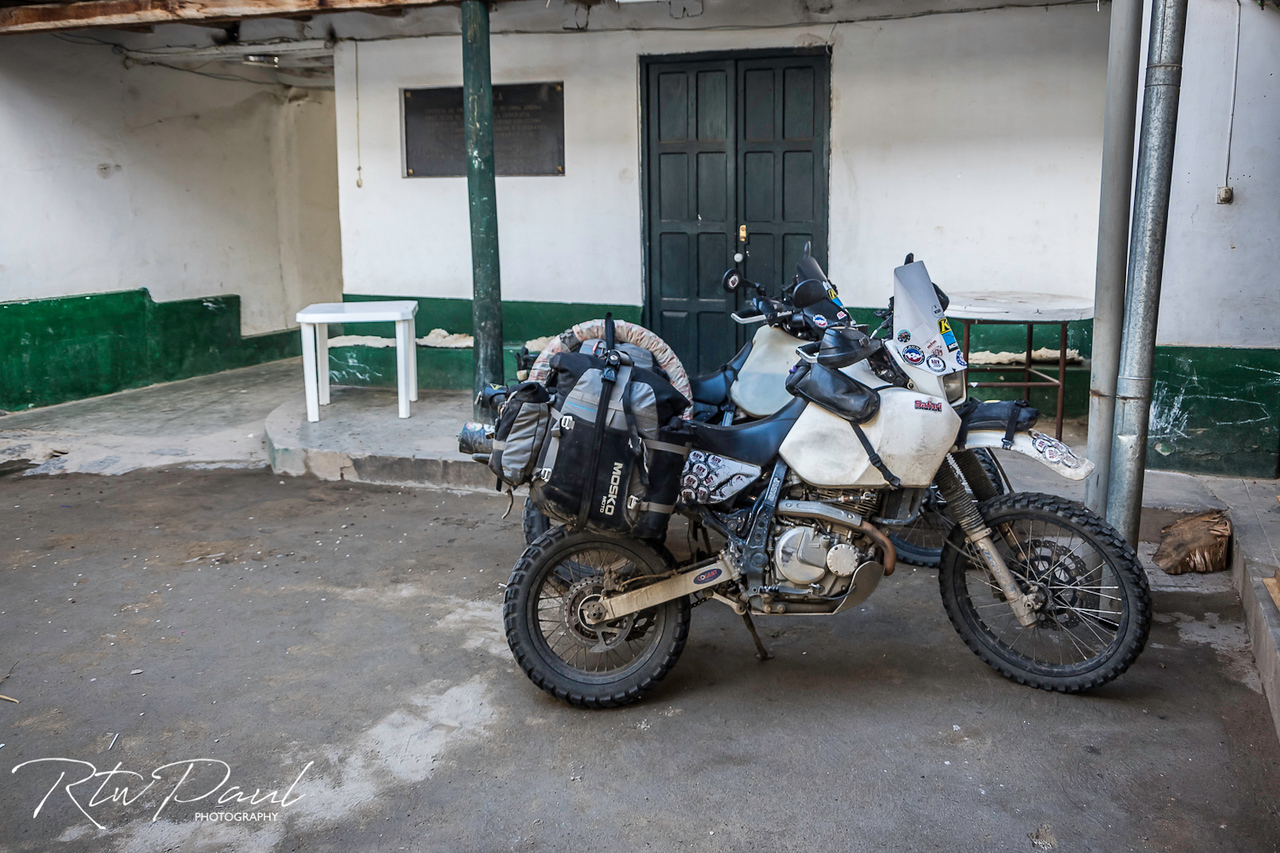 Over the remainder of the afternoon and the following morning, we get to know him quite well, as you could in such a short period. In these areas, he is a very famous man. His name is Captain Orlando Bladimir Alvarez Castro (you can’t make this stuff up) in 1973 he told us he made this town accessible to the world by car, prior to this you could only get here by horse, donkey or foot.

As a Captain in the Peruvian military he was given the task, he not only built the road, with help of the locals of course, down to the bottom of the valley and back up but also two other roads as well. He said he biggest regret was not making it wider, but in 1973 he was the very first person ever to drive a vehicle into the town square 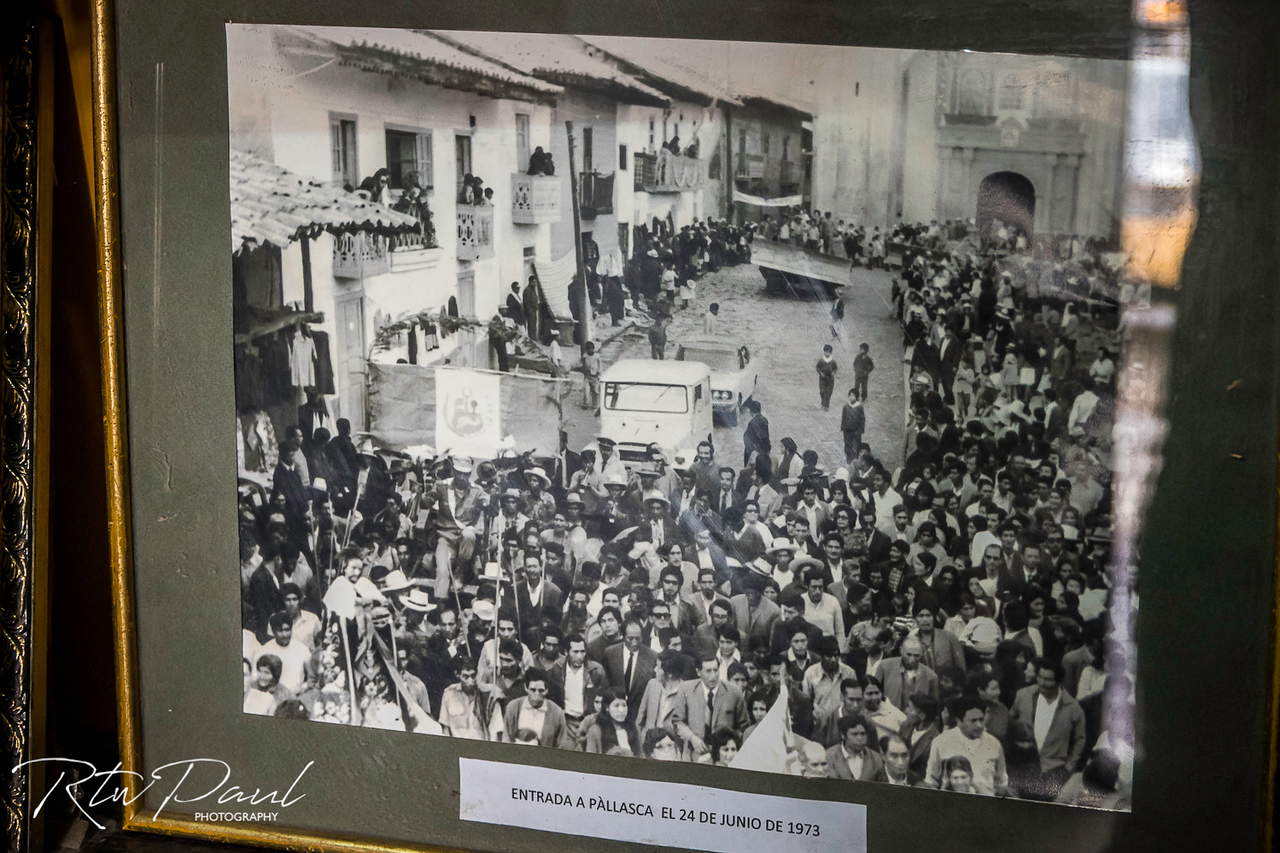 This was such an amazing feat of engineering he was was commended by not one President but by three! 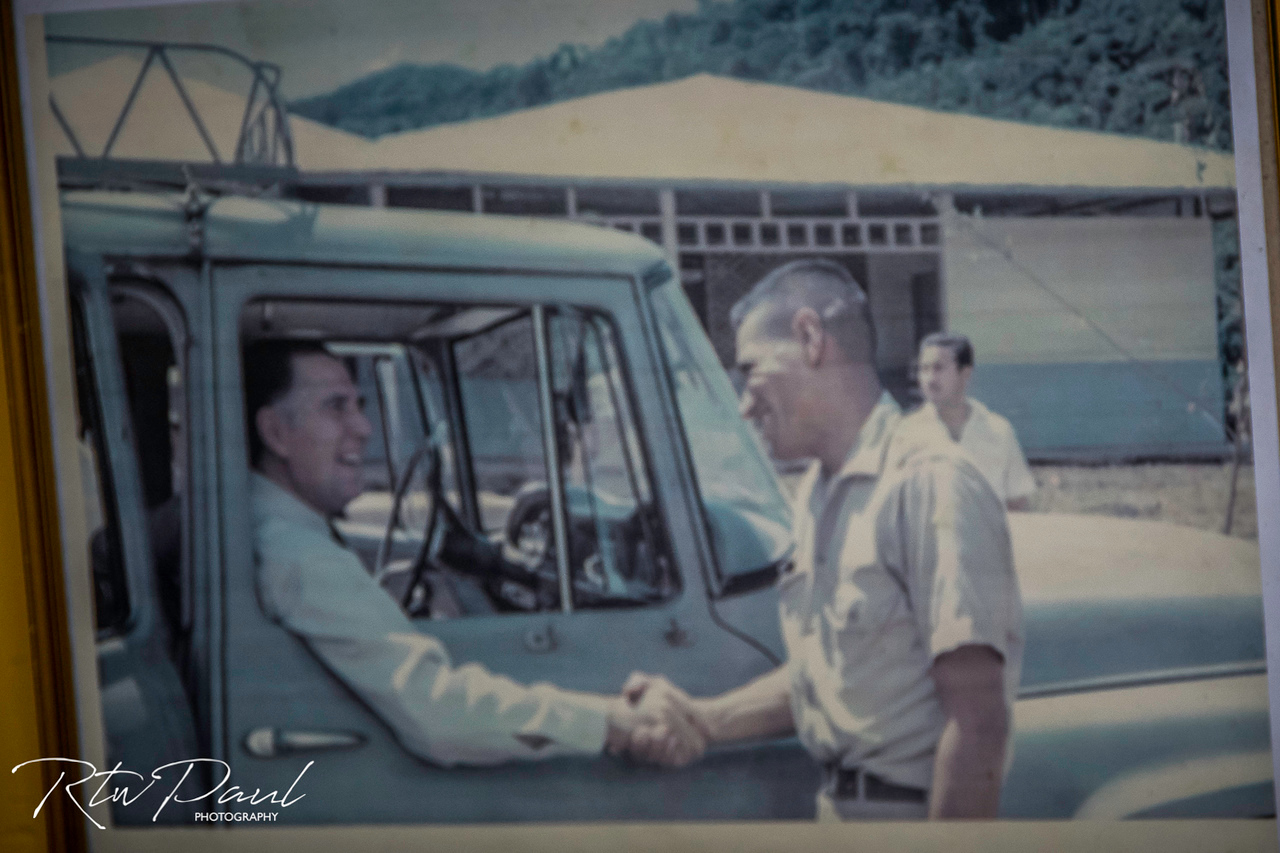 and given multiple awards for other services, our room where we slept was his ‘trophy room’ 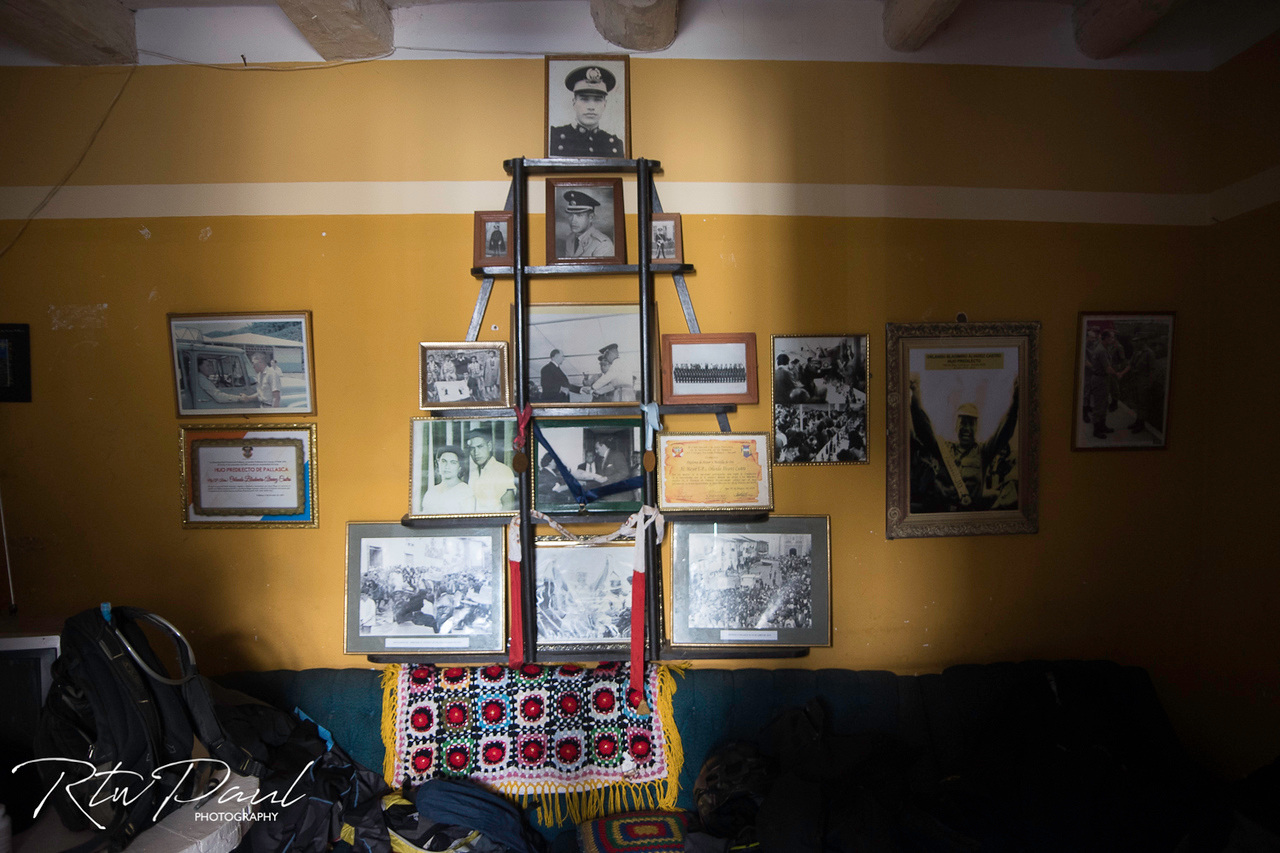 Why is this little Puebla so special?

Pallasca has a history that goes back to the earliest times of the Spanish Conquest. Serious studies indicate that its name would come from Apollacsa Vilca Yupanqui Tuquiguarac, an important noble Peruvian native who served during the passage of the first conquistadores, thus would have received a coat of arms, according to the historian Felix Álvarez Brun in his book Ancash, a regional Peruvian history.

A fact which is apparently not so well known is that the corpse of Huáscar, the last legitimate heir of the Incan Empire, was thrown in waters of the River Tablachacá (formerly, Andamarca) by the Spanish conquistadores.

The roads to the Plaza De Armas was completed 10 meters at a time by all the men and children of the town and they were supported by the women who provided the food.

He told us that they would set to work each day and during this time he would go and survey the land himself to determine the direction based on the geology the previous ten meters uncovered and that’s how you end up with this. 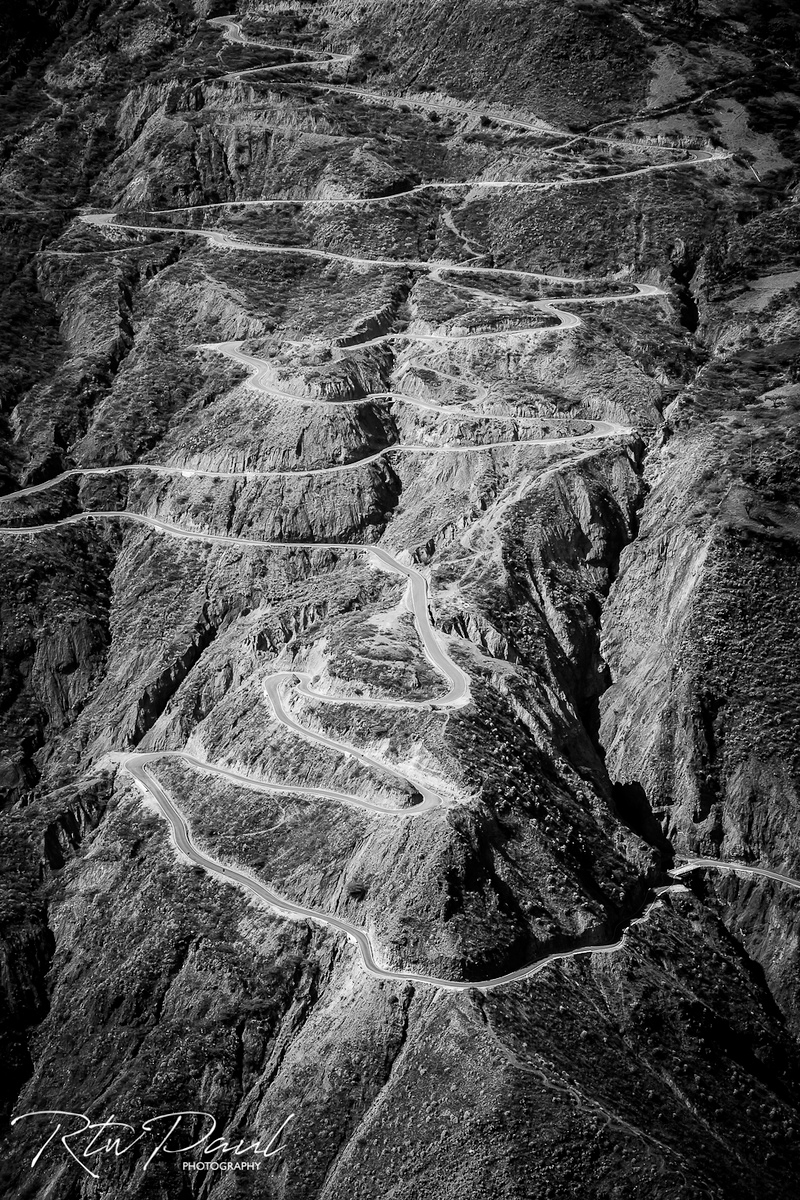 The town is a very original colonial place, one of few in the country, but as in most small towns and villages the populace is leaving and buildings are falling into disrepair…Captain?

“Ok, what we need is for people, local people to respect this town and its heritage, I am retired but I have made it my mission to restore this building as its attached to our church built in 1650, if this building falls down the church might fall down too, then who would come here…no-one!”

If you have ever been to Mexico and Real de Catorce there is a striking resemblance here (albeit in a Peruvian style), built on a very steep hillside, minimal cars, very friendly people, all original buildings, it is a place to visit for sure and the ride in and out is nothing short of spectacular 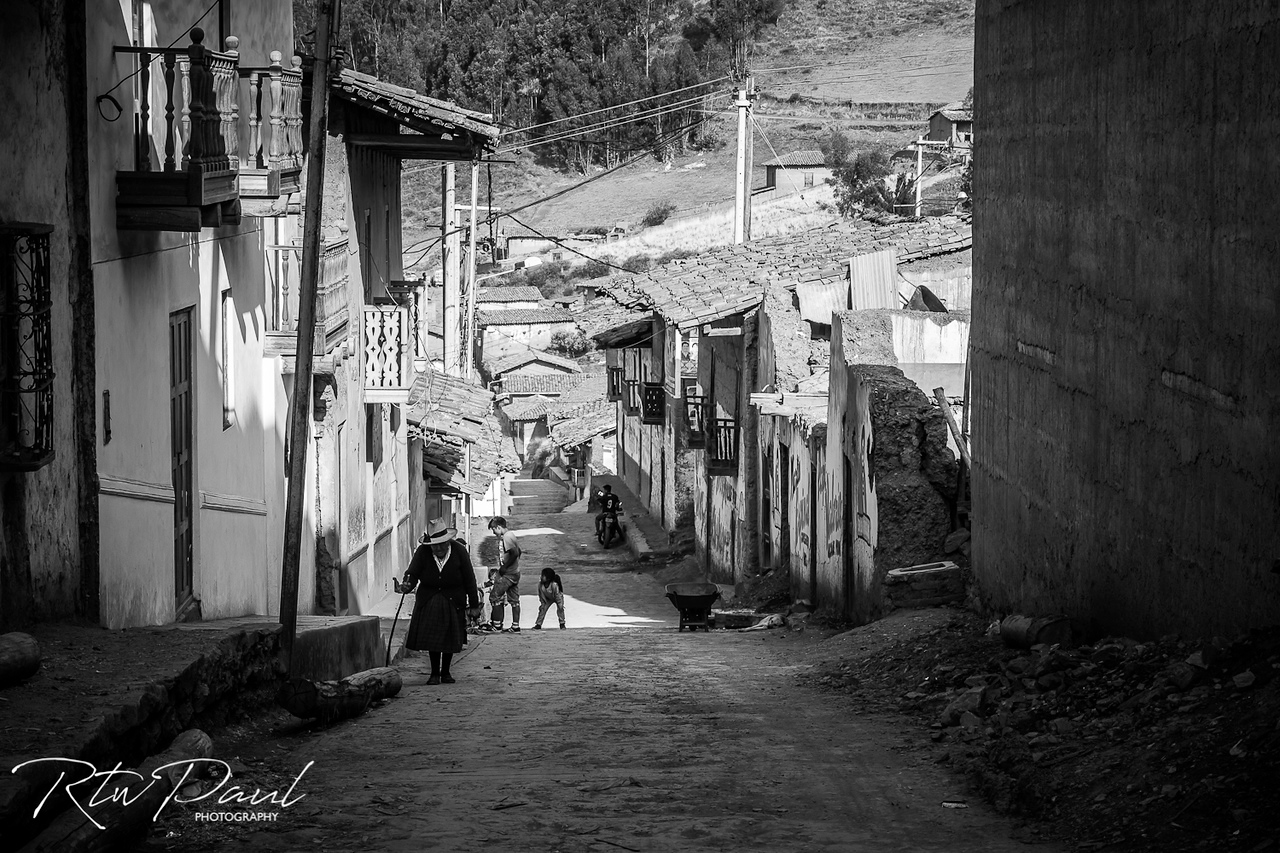 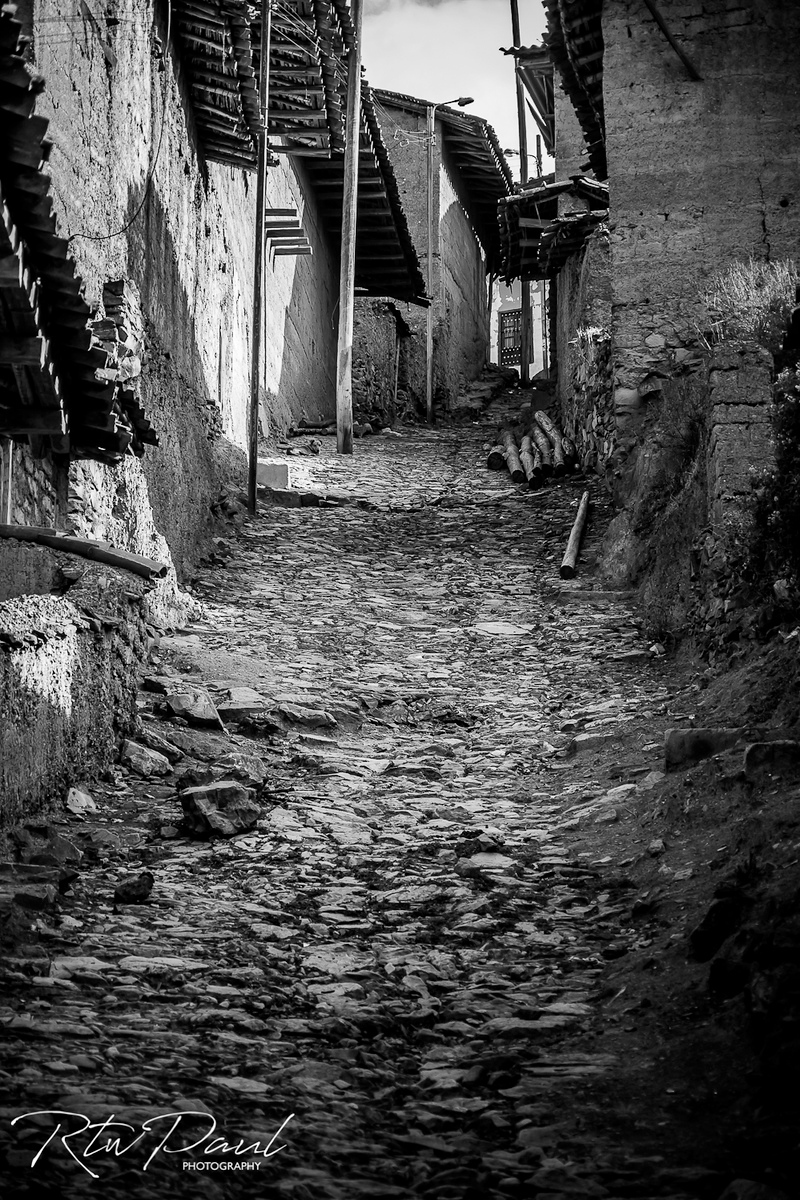 notice this is a one-way street look at the street sign arrow! 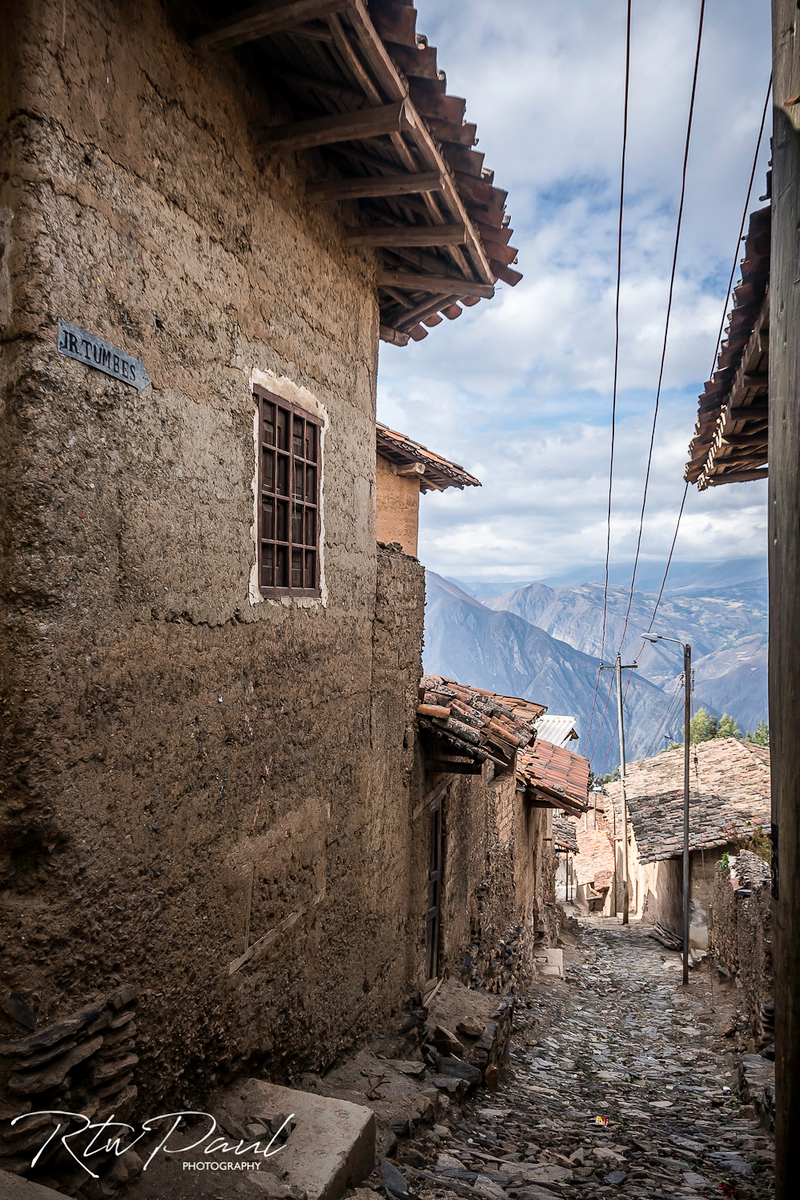 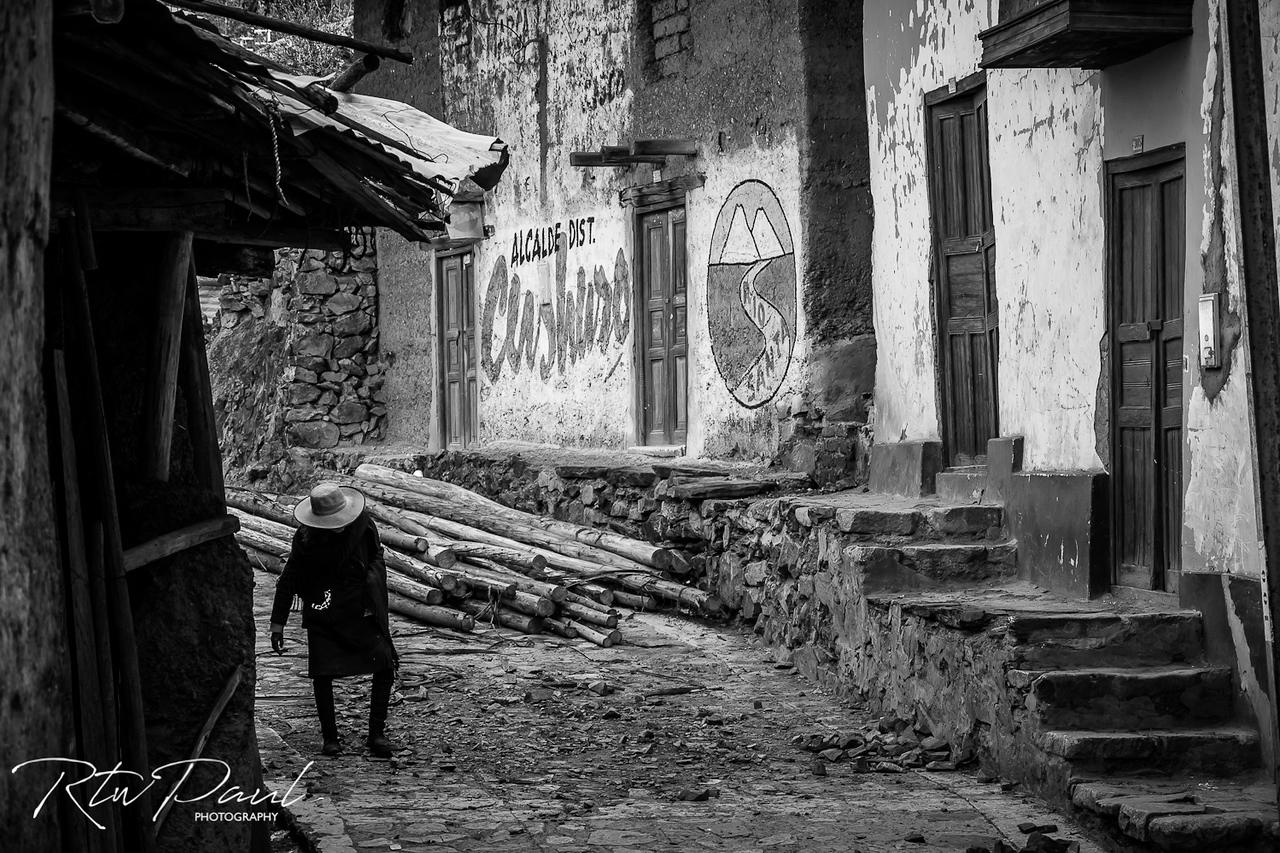 as we were walking around Egle thought she spotted Blinkin, if that means nothing you then you need to read this…the enlightened will fully understand 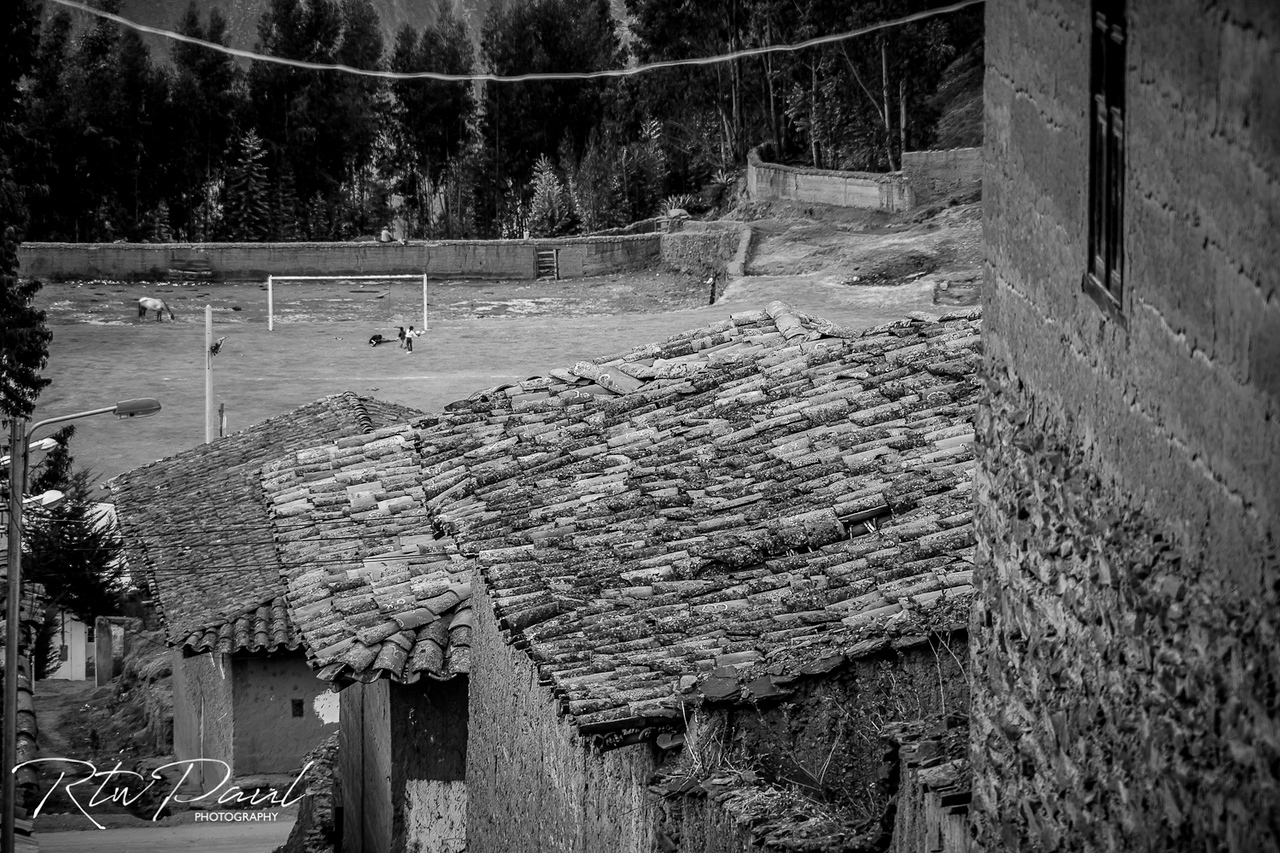 The sun starts to set and we wander back and stop in a store where we meet a local who is interested in how and why we found this place. We tell him the first thing that intrigued us was seeing the road on a map. 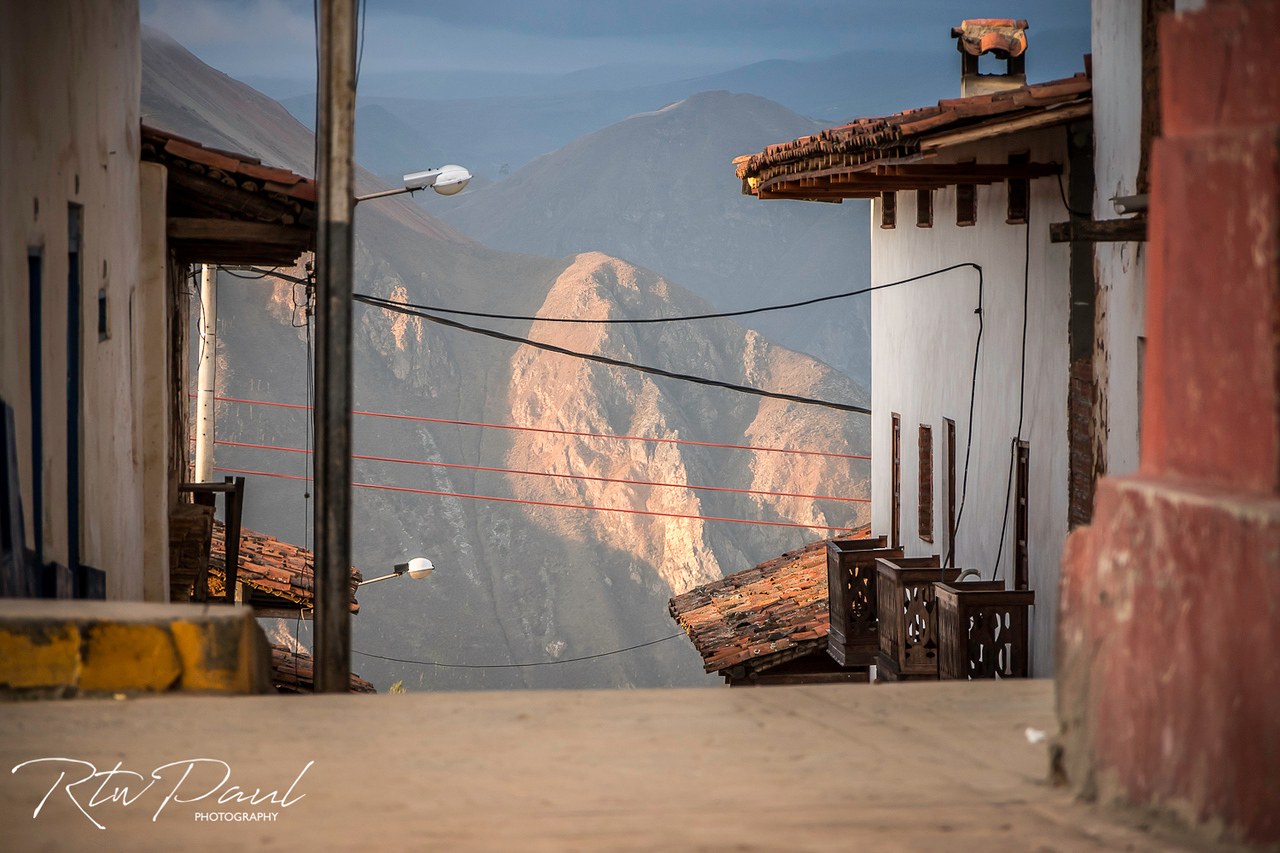 “you should meet the Captain!”
“we’re staying with the Captain!”
“he is a great man, a hero in these parts, if it weren’t for him this town would be dead, thank you for coming here.”

We leave early in the morning and head down another of the Captains amazing (dirt) roads and as you look across the valley you have to ask yourself if you were given this blank canvas what would your road look like and would it still be there today? 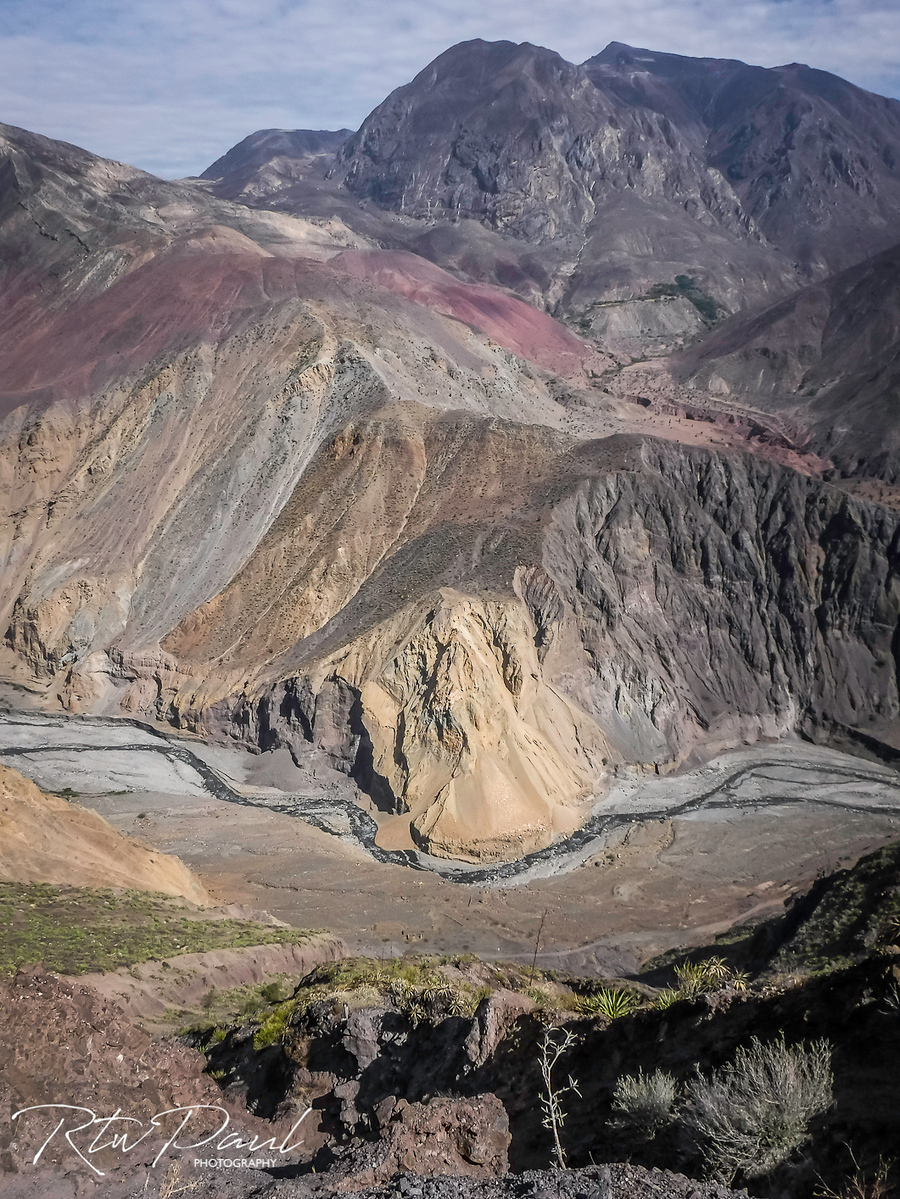 One thought on “Peru Offroad – Part 2”