There seemed to be a ‘little’ talk about front suspension since my last post and I did say that the PO had dealt with this so I didn’t need to – well I changed my mind!

I opened up both sets of forks, reset the white bike back to stock height from factory lowered and did a fork oil change, not really a big deal, very simple forks to work on.

one part I was waiting for was a chain oiler, the Motobriiz arrived, a very simple set up, activated by wind/ air pressure, but the great part about it is it oils the underside of the chain. A friend of mine has one on his bike and has ridden 9000 miles since install, no chain adjustments required and the chain which had over 10,000 miles before installation now looks like new. Ask me questions in a few weeks/ months for a long term opinion

Tools, when I was in Greece and bought these bikes online I wasn’t sure if I’d have access to all my tools or if not then what tools I could get my hands on. I started looking at other riders tool kits to see what they were using and then if I could find a tool kit that came close without having to buy too many extra tools.

The one I found that checked most of the boxes was RRR Tools, you can check them out and then see what extras I added. Before anyone jumps in and thinks this was a sponsorship it wasn’t I paid full retail, but what I will tell you is this – with what’s pictured below I did around 98% of the work on the bike or will be able to once I had corrected things and changed fasteners that could be troublesome.

over the years I have used a number of companies trying to find the right set up, for bigger bikes and 80/20 riding and hard luggage its a simple choice – Jesse Luggage.

…but now back in the dirt soft bags are the way to go, I elected for pannier racks to add some additional stability and structure to a potential rear end weakness and for me nowadays there is only one real option for soft luggage and that is Mosko Moto. If you haven’t checked them out, you should read the thread from the begining, it is very interesting how they developed the product with input from a bunch of opinionated ADV riders…Us inmates, its here

We will be using the new Version 2 of the 25 liter Scouts, they are due for release very soon but for now, Mosko has loaned us two sets of V1.0 bags “with character” as Pete (@Sideoff ) likes to describe them.

The setup will be very similar to what’s pictured below, we’ll be putting them thru the wringer for sure. It’s a very simple set up, two Scout V2.0 saddle bags and a Backcountry duffle for each bike, a total of 80 liters

Any questions as normal fire away but be warned we leave bright and early May 3 so after that responses may be a little slow, as we have something in the region of 25,000 miles of dirt planned this year and a lot of wild camping. The tracks/ routes we already have laid out look like the image below and if that seems interesting then the ride report is already up and running as this RTW has been going since Jan 2016, it’s here, subscribe and follow along. I would suggest starting at page 1, we’ve hit some amazing places already (including Cuba) and this year looks to be prime for a lot more good locations…

There is a Guinness World Record in the mix as well with ride, more about that will be revealed in the RR soon…

Hope to meet some of you out there in the dirt, I’m sure we’ll be passing a few DR650 owner along the way… 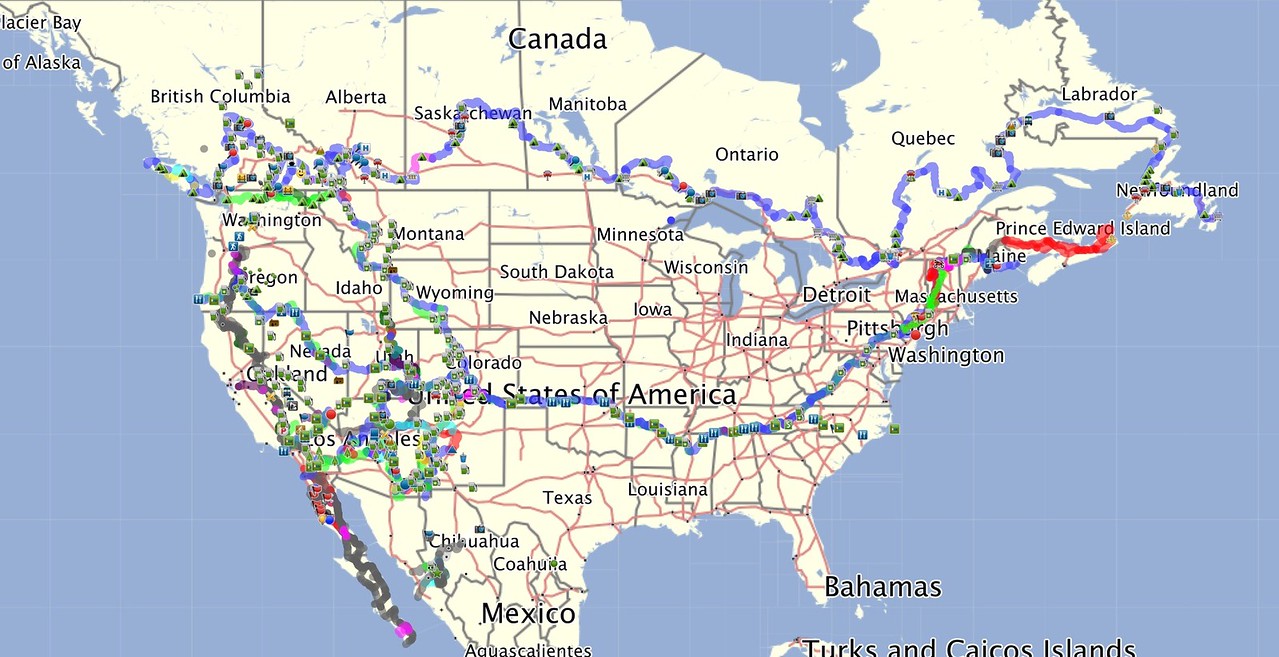