While we were trying to come up with an alternative way to get to Santiago now we knew there was no chance of a train, a guy comes up to us and had seen me towing Egle into town.

“Would you like me to arrange a truck for you where do you need to go?”

He pulls out a cell phone and makes a call, wanders off while he’s talking, then comes back when he’s done.

“My friend said he’ll call back in 20 minutes, he thinks he can take you.”

“Great.” We sit down and wait, as we’re waiting, our ‘fixer’ is talking to another guy who was watching the whole thing taking place. and he comes over.

“Whats wrong with the motorcycle?”

“Clutch plates, we need new ones.”

“What kind of motorcycle is it?”

“Have you been to the Suzuki dealer?”

“Yes.” He then gives me directions and tells me about 2km away, just a few turns and easy to find.

I take off and ride up and down every street he told me to, and a lot more, I see nothing, not even a building that could hold motorcycles, so I come back.

All the time I’d been gone Egle has been surrounded answering all the normal questions and watching the world go by, everybody is super friendly trying to come up with solutions but to no avail.

I tell the guy who had said there was a Suzuki dealer I couldn’t find it, another guy in a bicycle taxi said he knows where it is, he takes off and I follow, we go down all the streets I did a few minutes before and stop outside a house. “It was here, but now it’s gone!”

A man comes out to confirm its gone, I really doubt it was here at all or at least in the sense we understand a motorcycle shop to look like, he tells us where the best motorcycle mechanic in the city is, we take off…

A lot of pedaling for him and a few minutes later we are outside a house with an alleyway, names are getting shouted to get someone to come out

It was obviously going to be a no go, I was hoping Cubans would have a miraculous fix and get us riding again, nope.

I returned and let Egle know what had happened, in a word…nothing!

We sat and had a coconut from a young guy who just pulled up where we were sitting, right next to a shooting range with air rifles.

We paid him then handed up a few extra pesos we had in coins, it was the equivalent of about 30 coconuts. The boy was a teenager, he looked at the money and with pure Cuban honesty told us it was wrong and too much and tried to hand it back.

We told him it was a ‘propina’ – a tip, he smiled and became a little kid. He now had extra money, what would he do with it?
Refreshed and happy, but still stranded, we look around and our guy who had a friend who was getting a car had gone, vanished.

We decided it was time for us to do the same, I looked at the GPS, Santiago was 140km away and mostly flat, the sun was shining.

We’d towed around 100km already, what the hell lets do it some more, we’d become very efficient at towing averaging around 70kph on the flat ground heading to Bayamo. I knew the road back to Santiago, I’d ridden sections of it before, maybe half was freeway so the best road surface Cuba could offer.

25km out of Bayamo the rainy season started, obviously we thought it was just rain and it would pass, how wrong we were.

The remainder of the day saw us stopping in bus stops with the locals because the rain was so heavy we literally couldn’t see anything. Add to this Cuban roads are treacherous when wet, and there is no drainage so water just sits there. 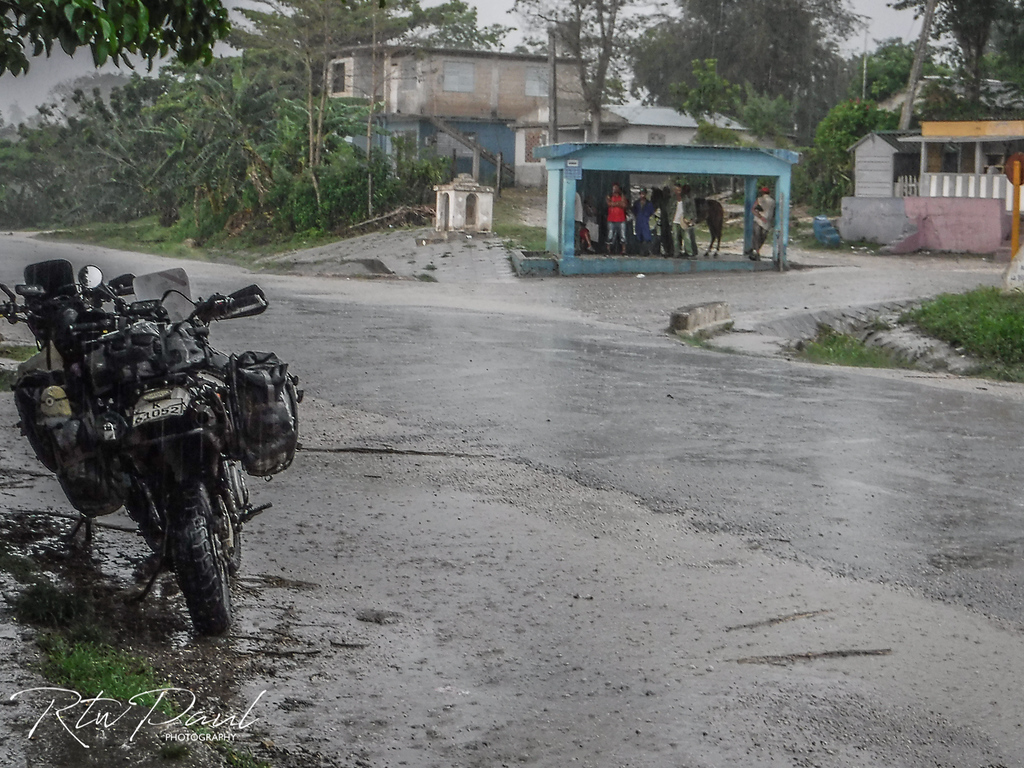 We arrived in Santiago in the late afternoon; we had two days to get there and did it in one. Did we just complete the longest DR to DR tow in history, we didn’t know and we didn’t care. I took us to a Casa I knew that had a garage and planned to meet the Stahlratte the next day.

It was time for the last meal in Cuba and few celebratory beers, we found a nice restaurant and spent our last Cuban money looking down on the city we thought we never see.

After dinner walking back, we bump into Simon and Lisa, they told us they had been to the Stahlratte already to confirm the location and were told we had to be there at 8 am sharp in the morning as an official was coming to check the bikes out of Cuba.

The following morning we towed another 10km to the Stahlratte where it was docked in a marina on the outskirts of the city. The authorities had canceled and told us to come to the office on Monday morning, it was Saturday!

Simon and Lisa were sitting there and I felt for them, they could have had two more days riding, we couldn’t but maybe we could’ve waited for that train.

Monday rolled around and we made a call to see if we could just bring photos of Egle’s bike to check it out, “no it must come here” was the response. So more towing into the second largest city in Cuba at 8 am on a Monday morning. Where was the motor vehicle department, on the far side of the city of course, close to where we had been staying!

We towed thru the city, any other country it would have been a problem, but this is Cuba, rush hour traffic basically doesn’t exist so it was easy. Less than 1km from our destination the tow rope snapped, we knotted it but 500 meters later it snapped again, it had rotted and with all the moisture and strain we had put on it for about 240km, I’m not surprised.

We improvised, linking to cable locks together, they obviously have zero give but it got us there. We did the checkout and said goodbye to all our Cuban documentation and towed back to the Stahratte. 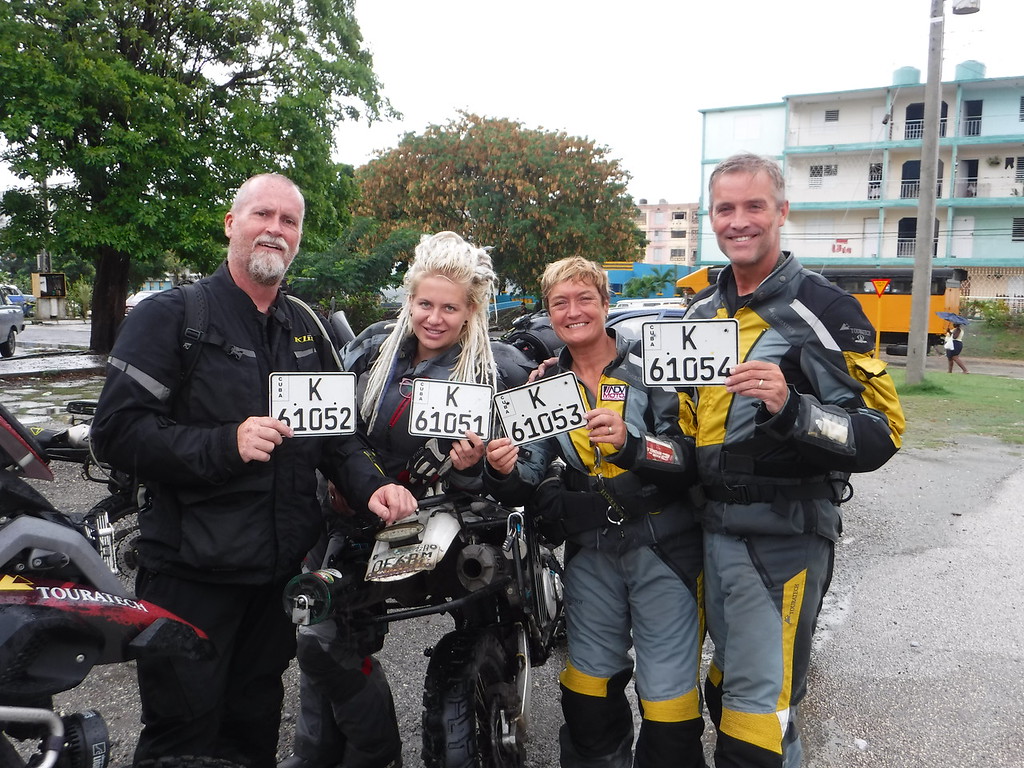 We calculated I had towed Egle 264.8km across southern Cuba. Once the four bikes were on board we pulled away from the side and Ludwig set a course for Jamaica just one day sailing away.

How to escape from Cuba

I’d been to Jamaica, a LOT, like 50 times a lot for work over the years, it was not a high priority for me on this trip, most people that travel to Jamaica only see a very small part of it, usually from the airport to a resort that they never need to leave until the return back to the airport, For others who do travel around they find its kind of dirty, unfriendly in places and expensive in the places you’d want to stay, and you can’t walk for more than 5 minutes without being offered drugs – $80 a night in an Airbnb in Kingston in a residential area near basically nothing interesting.

Cuba was the main point of the trip southbound and not having to ride thru CA for the 4th time which turned out very lucky with the Nicaragua situation happening, and eruptions in Guatemala

Ludwig had sent bikes docs over to the Jamaican authorities more than a few weeks earlier as he’d been told there was no reason we couldn’t take our bikes off and ride around for a week, we honestly weren’t holding our breath on riding there, we never heard a thing about it until we arrived. The simple response from the authorities we got was – “it looked like a lot of work so we didn’t bother.” A typical Jamaican response to a lot of things sadly.

On arrival, the whole trip dynamic changed dramatically in a blink of an eye, if you follow 2ridetheworld/ Simon and Lisa you will know exactly what I am talking about if not click HERE but not if you are eating, hate the sight of blood or small kids are looking!!!

For our remaining time, we didn’t take a week to sightsee the island, we took the whole week to help and assist Simon and Lisa, Lisa mainly in any way they needed it, saw the inside of numerous hospitals, medical facilities and met some amazing doctors. Chased an ambulance from one side of the island to the other thru the Blue Mountains in a rental car with three brakes and bald tires…didn’t even get a photo of the pile of crap!!!

On the return drive from Kingston, we drove back around the eastern tip of the island to avoid the Blue Mountains that had had a week of solid rain. We saw a little coastal scenery, but not much 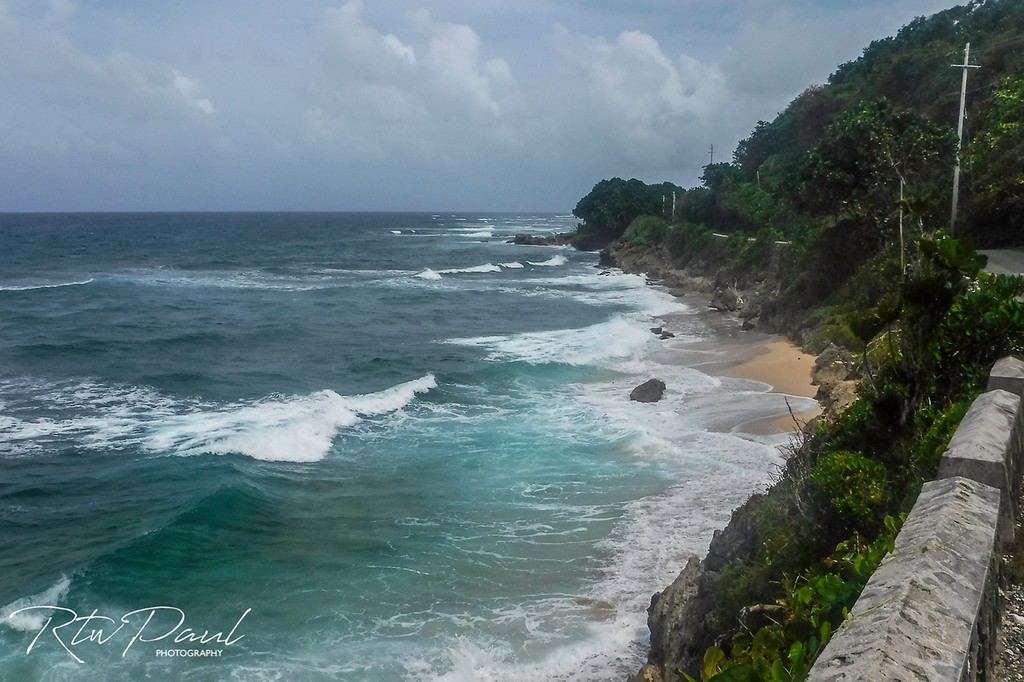 Back at the Stahlratte in Port Antonio we really had no idea of the area it was anchored as we’d left so quickly on arrival, we were right next to Navy Island, once bought and owned by Errol Flynn or some say he won in a game of poker.

He used to moor his yacht there and hold outrageous parties but never built a house as many people think, good write up here

This is all that remains of one of the original docks, the Island has changed hands a few times but is now back in the ownership of the Jamaican Govt. 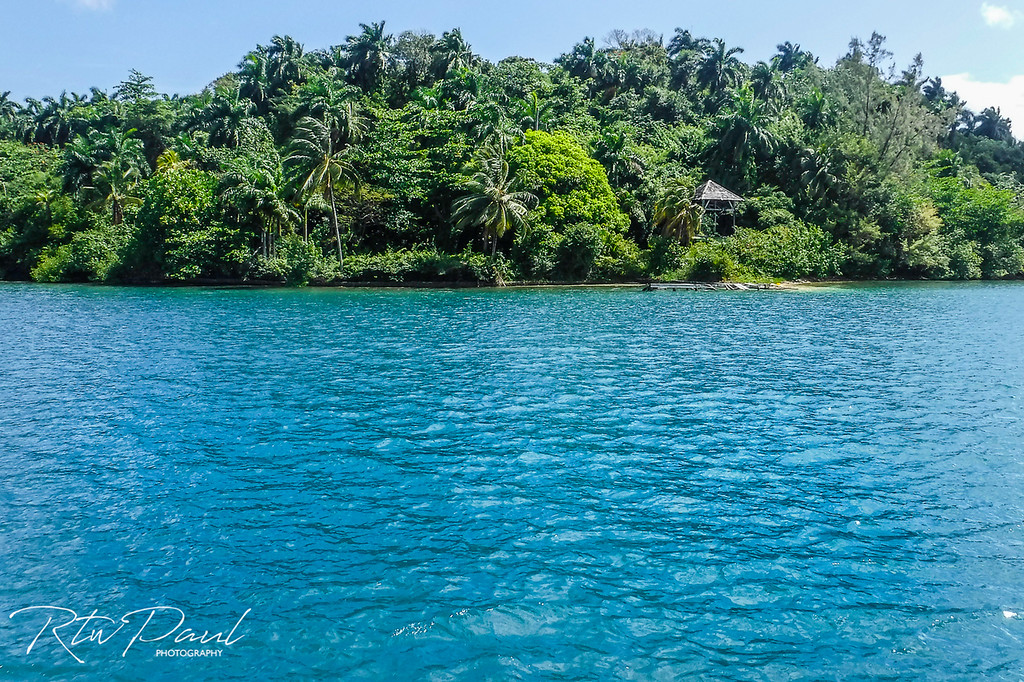 A few hours after returning we set sail for Providencia, a tiny dot on the map about 3 days sail from Jamaica where Simon and Lisa had decided to stay for obvious reasons. 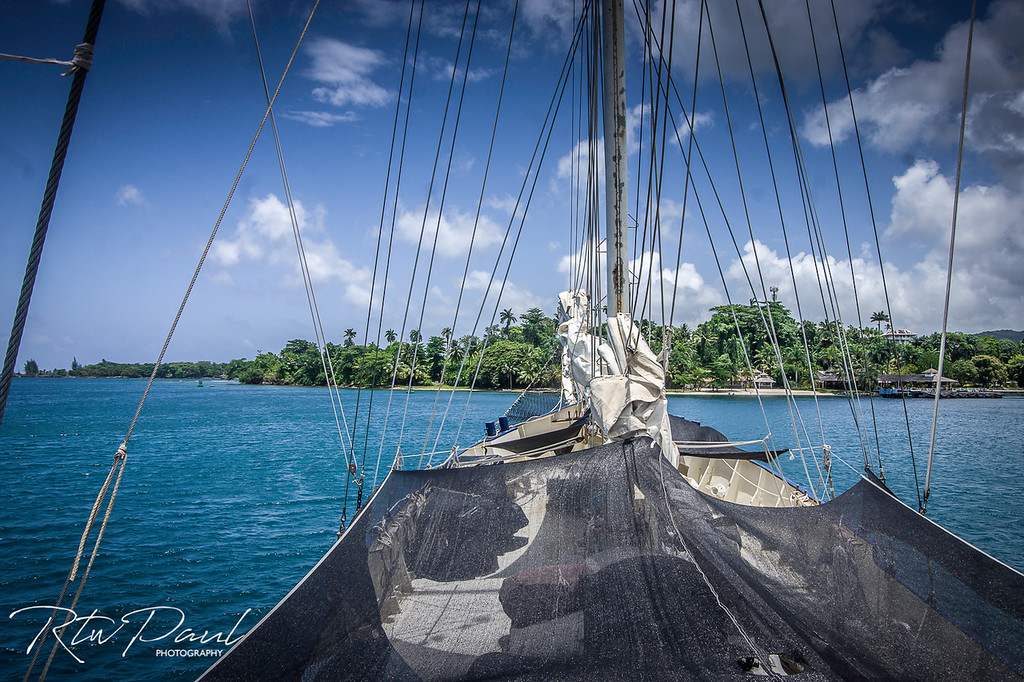 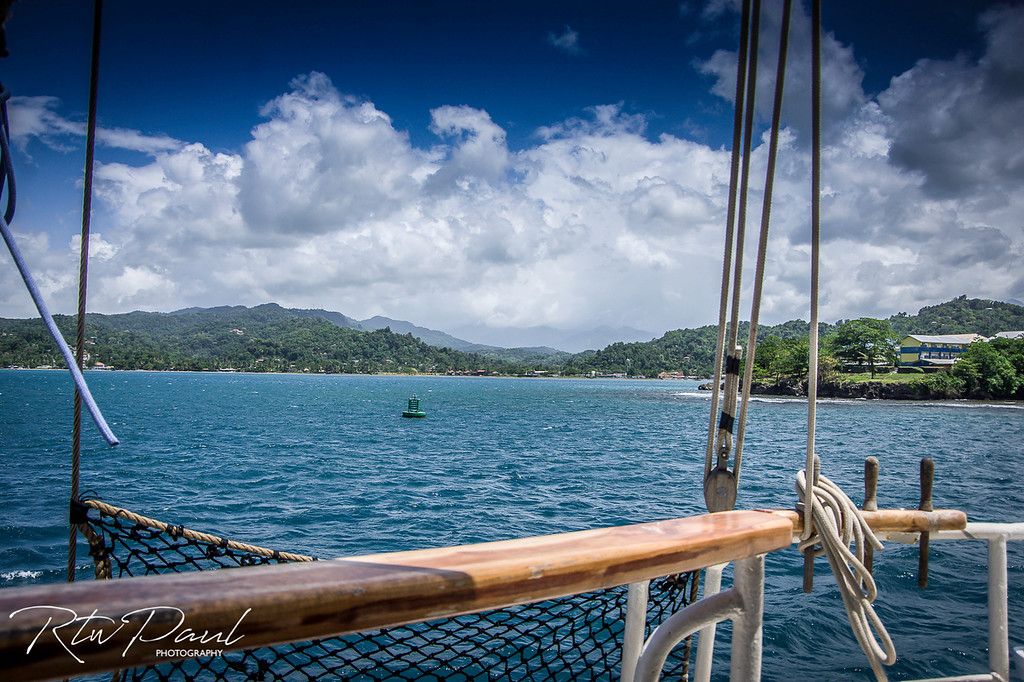 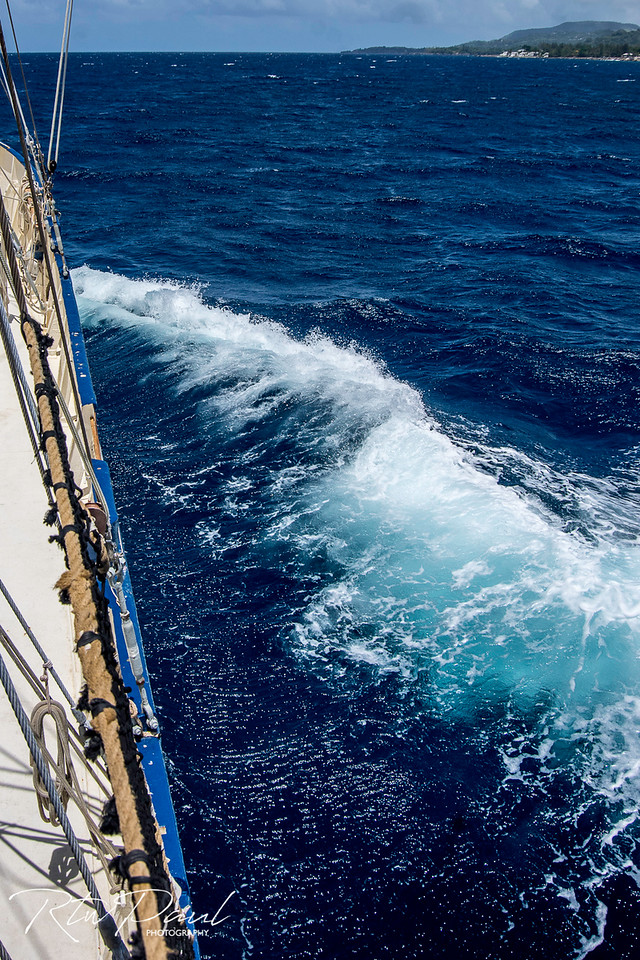 Providencia, not much to see or do unless you are a diver, the rainy season was in full force, we were on the island for 7 days, personally, I think this is a major misjudgment by the Stahlratte. The Island is good for 2-3 days tops, its 17.3km around, moped rental is $25 a day for a moped that most wouldn’t want to get on.

The remaining time could have been spent in Cuba a lot better, cheaper and drier, with friendlier people enjoying more of an island that you could ride around (not us of course

) and what the major expense was for in the first place, hopefully, they change it for future travelers as Cuba needs as much time as possible.

TBH, Cuba direct to Panama would be a better choice and would give an extra TWO WEEKS in Cuba. Ludwig/ Stefan?

So what did we see in Providencia, well about 20 minutes of blue sky…this 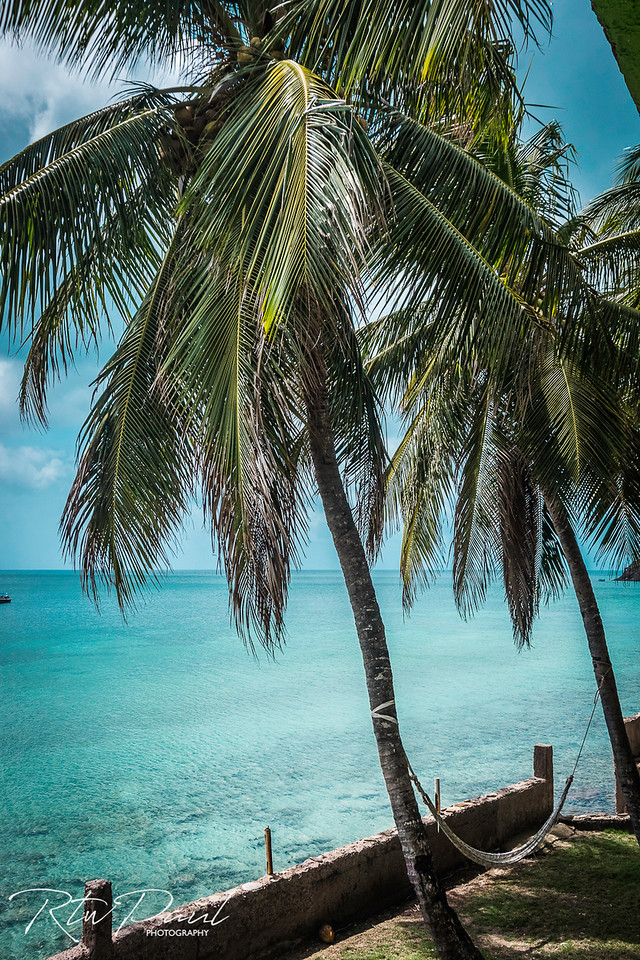 and the rest of the time this for almost every minute of daylight for 7 days, during short breaks we ran to the store to buy food which is expensive as EVERYTHING is imported, no real chance of riding or walking anywhere…for us Providencia was a total bust and a room was $55 a night!!!