As we leave Guanajuato I feel a quote from ― Miguel de Cervantes Saavedra, Don Quixote is quite apt to get us moving again, and for those who have followed me for a long time might feel this could have been written about me, about my past and now the present – “Truly I was born to be an example of misfortune, and a target at which the arrows of adversary are aimed.”

We doubled back towards San Miguel de Allende and looked again for anything but pavement, we found a short stretch and made dust fly

crisscrossing dirt roads and broken pavement, meeting lime pickers, and agave farmers, if you think about this reading this in the comfort of your home. Think about how long it takes to fill the bed of a Ford Ranger with limes no bigger than a golf ball or hand plant a field full of agave plants…we are lucky to be born where we were born and not to have to see this first hand as a worker for the remainder of our lives…travel makes you think and be grateful. 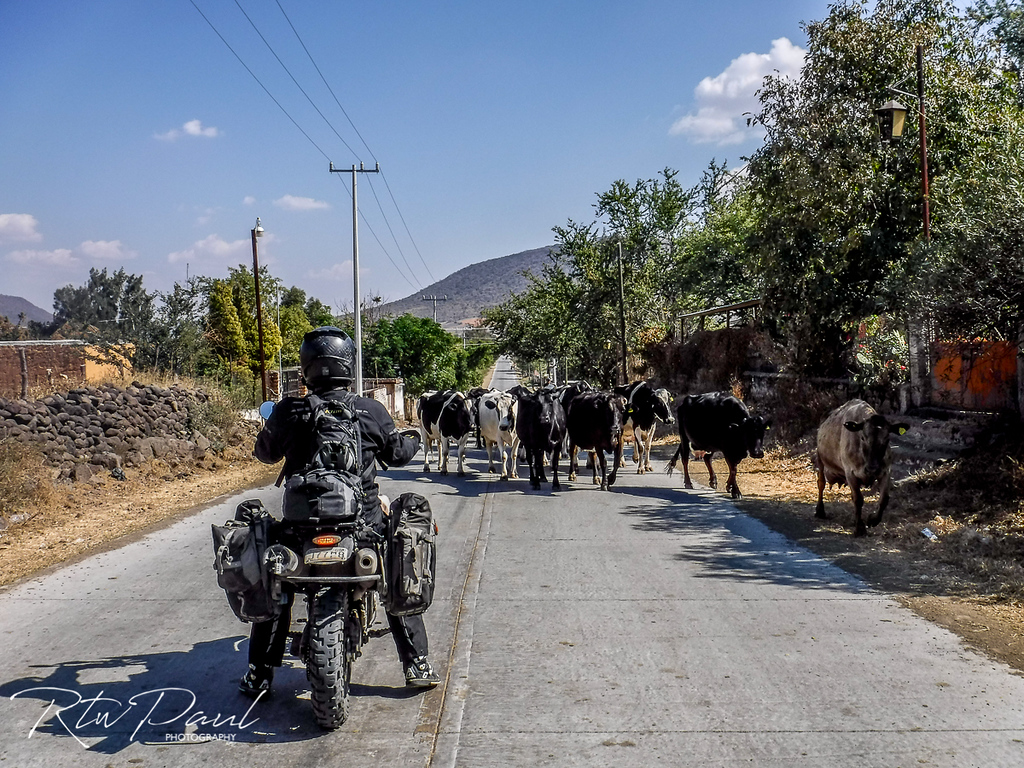 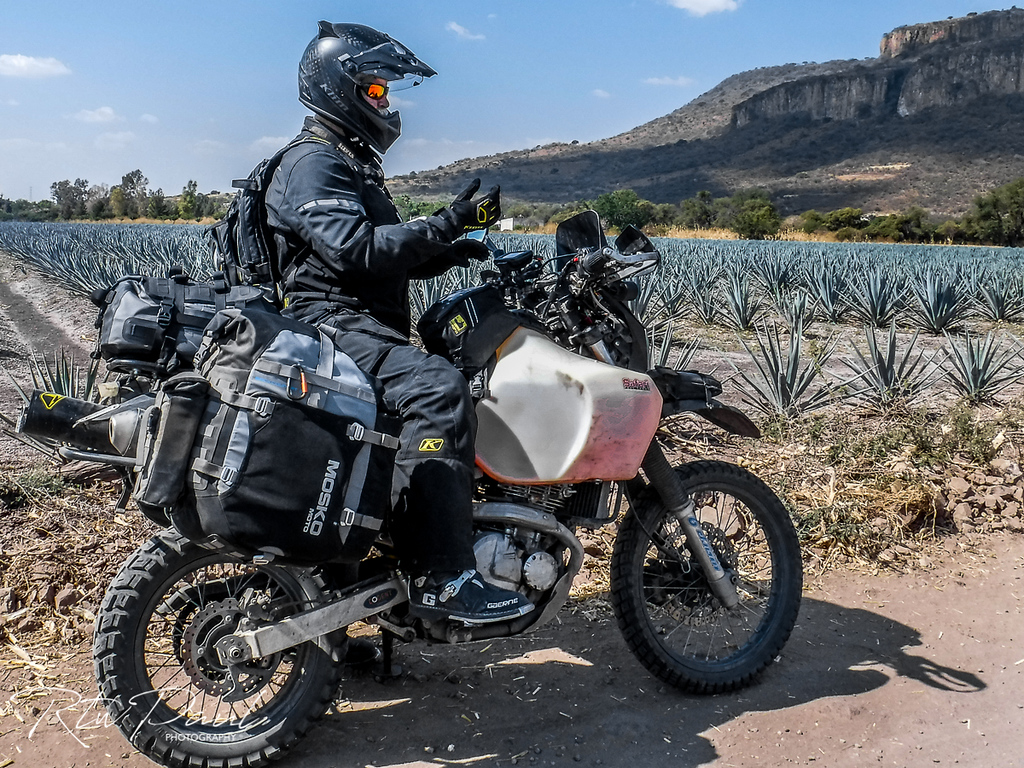 Good night, and thank you for your support and continued backing and following of my ramblings… 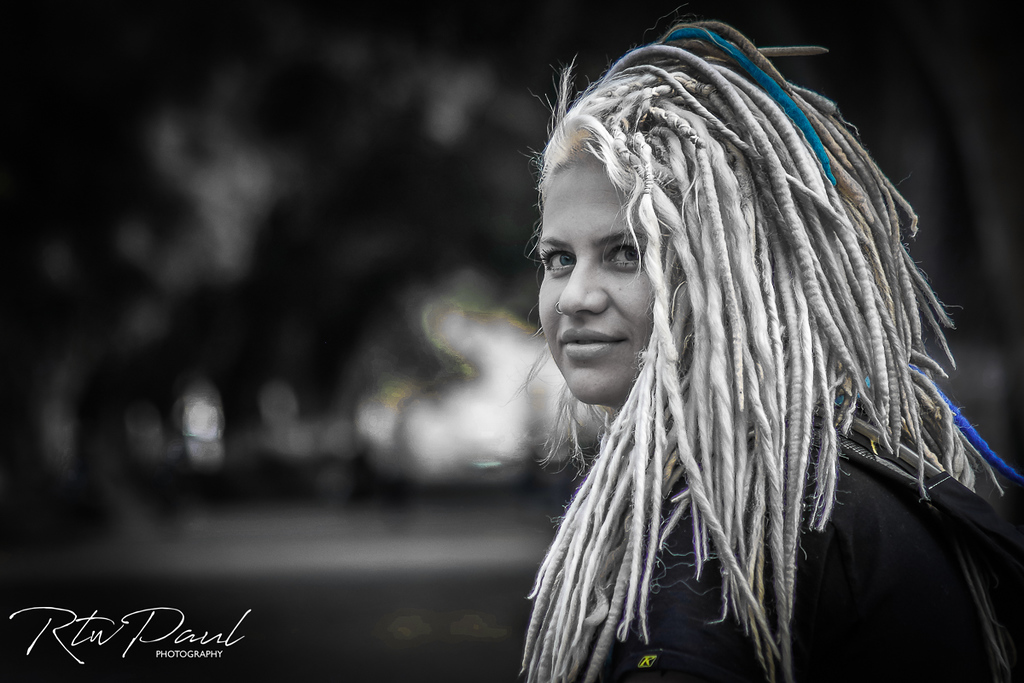 If you talk to any Mexican they will tell you mariachi music is in their blood, Jose Alfredo Jimenez, the king “El Rey” was the Mexican Elvis, penning over 1000 songs in his short career – he died when he was 47.

There is a mausoleum in his memory just on the outskirts of Delores Hidalgo on the 110/51 between GTO and SMA. If you want to pay your respects or see the biggest sombrero in the world then come stand in line with hundreds of others as his music play gently in the background.

back in SMA hanging with Vinnie and the guys from MotoClassico for a few days. The town comes alive on the weekends, musicians come to the centro to play

MC arranged a ride out to two towns I’d never heard of, Xichú which barely shows on Google maps and not at all on my OSM maps besides a dot, and the return via Mineral de Pozos

Riding out of SMA the blue sky looked great until we could see what looked like smoke ahead, nope, fog! Incredibly thick freezing fog, so much so the group, 6 of us got separated as we couldn’t see more than 20 feet in some areas. Stopping at an intersection with Vinnie, deciding if we should continue or not and if the others had the same thought at the intersection we were at…one of the group comes up from behind us, and we were at the back!

If any of you have been thru SMA and met with the moto classico guys you’ll know Art. Well, he had just finished a two-year restoration of this two year only Yamaha, and as he pulled up his muffler nearly fell off, he had no tools so Vinnie and I helped him out.

We continued to Xichú, the road is a mass of tight bends, all paved to a tiny little town that is very remote but well worth a visit I forgot a decent camera so this is as good as it gets!

Sadly obviously the same story for Mineral de Pozos. Pozos at one time (long ago) was thought to be good competition for SMA and would possibly develop, have a ride around the tiny cobbled streets makes you understand why people would think that and why some companies invested heavily. To me, it felt like a ‘flatter’ Real de Catorce 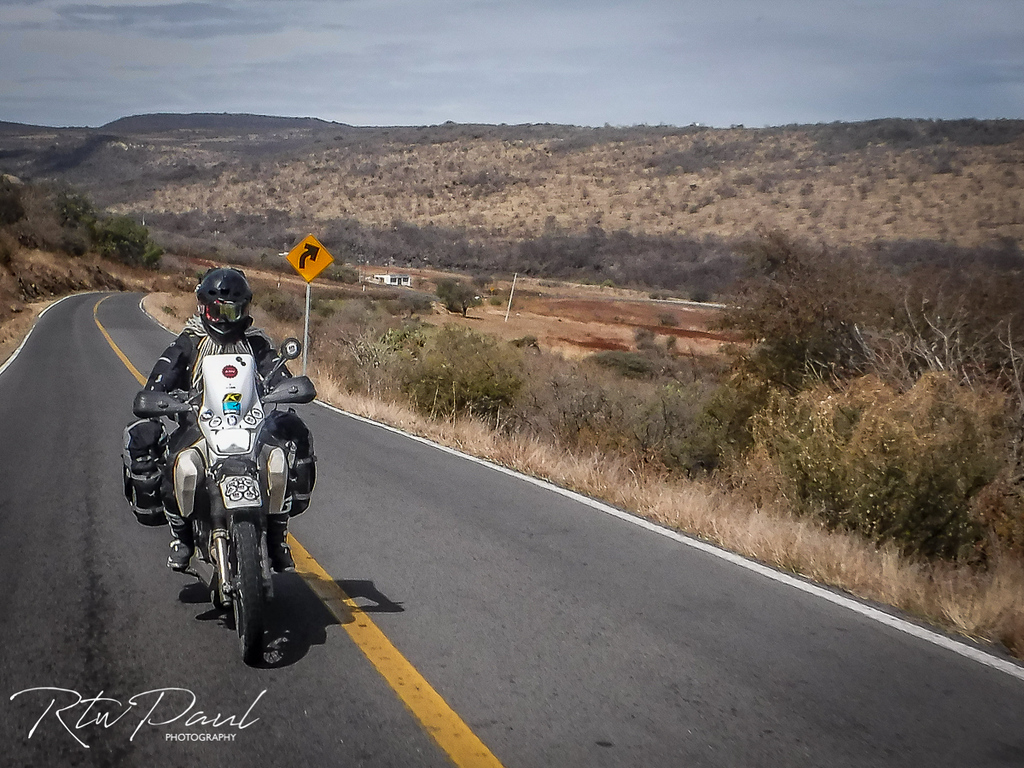 and onto Morelia, because its a big city don’t let that put you off, once you get to know if it feels like a friendly village

We booked an Airbnb, walking distance from the center and decided to stay a week, maybe make a few ride outs. The heart of Mexico is so good it just makes you want to slow down.

Here’s my Mexico tip – the average Mexican works 5 1/2 or 6 days a week, sometimes 7 days a week. If they do have a day off its Sunday, you do the same wherever you are and join in, you will not regret it.

It is a family day, the centro/ zocalo comes alive and this is when you really get to see how much family means, sit down, blend in and people watch 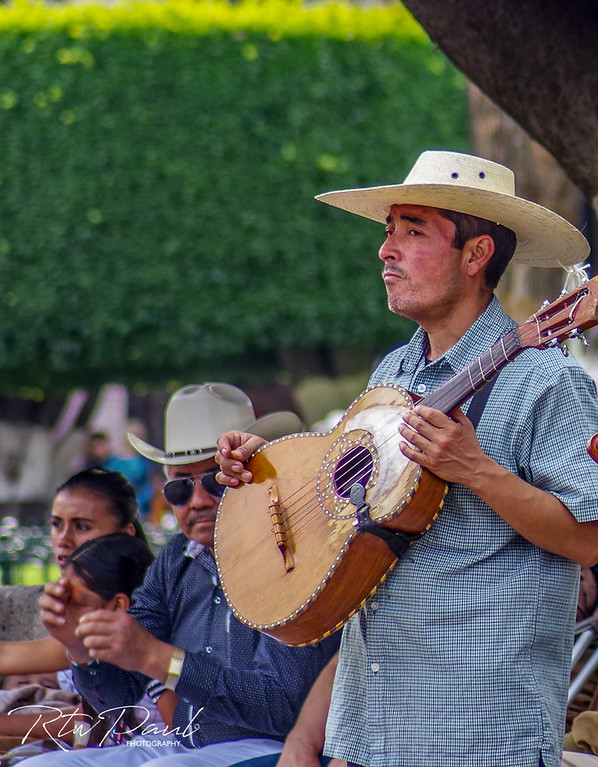 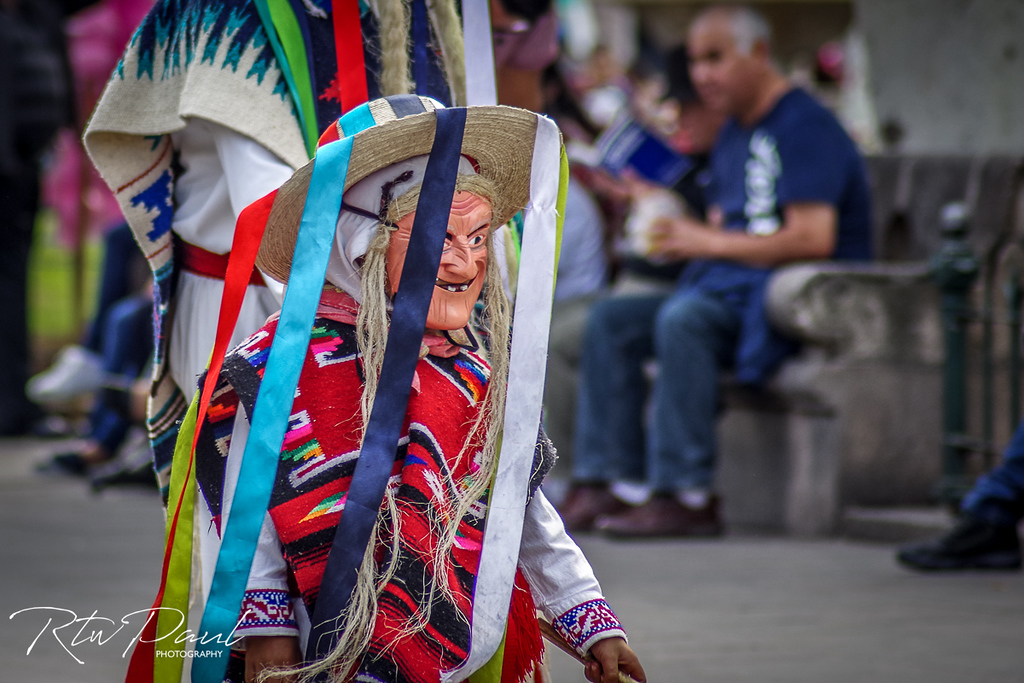 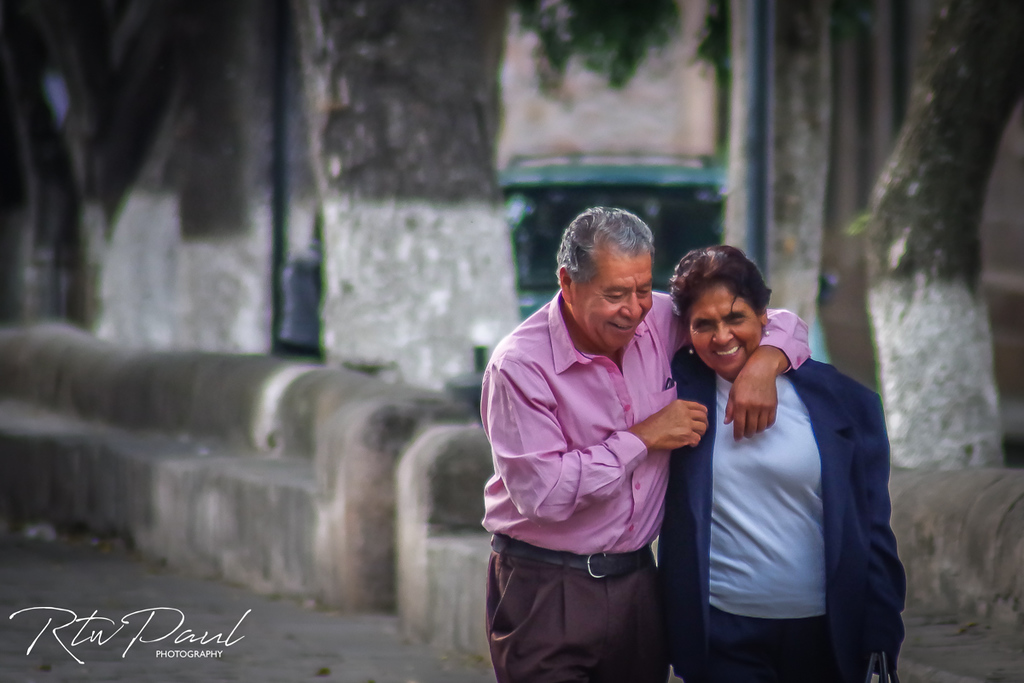 Sundays are all about the kids and entertainment…don’t miss out by riding your bike!

Those ears are made for listening!

What does all this sound like and why is everyone so enthralled…this – turn the sound up, but advanced warning ****this will make your feet hurt!

Back in 2011, I was riding with Nick Sanders when he was prepping for his ludicrous Prudhoe/ Ushuaia/ Prudhoe record run. While riding on route 200 on the Pacific coast heading north from Lazaro Cardenas to Manzanillo I was chased by the cartels for around 40 miles but luckily outran them, Nicks chase truck driver Jim who was around an hour or so behind us was kidnapped. He escaped with his life luckily after a few days, Nick being Nick tried to make this a positive thing and use it as a promotional tool…ever the showman, even if he has to bend the truth.

The reason I tell you that is I am now obviously wary of that section of the west coast for personal reasons! Looking east Veracruz state has a few areas that are labeled Red Triangle areas, or danger areas…so we are avoiding some of the east coast as well!!!

If you look at a map, you’ll understand where we are.

This leads me to where we are, Morelia and the heart of Mexico, there is some great riding here, amazing towns and cities like Zacatecasacus, San Miguel, Guanajuato, Queretaro, Morelia, Patzcuaro, Puebla, Taxco…just to name a few of the more familiar ones.

A few days back we were looking at maps for a route from Morelia to Patzcuaro, two towns that are not high on the tourist list of places to go to…but should be added. Morelia is a big city but the center is amazing, (see previous post) and Patzcuaro is a small town with a great market and a lot of history.

Finding offroad tracks is never easy in countries that have virtually all the land privately owned, but Mexicans being Mexicans they want you to explore and enjoy where its safe to do so.

There is a GPX attached for download if you come this way, this is a great day ride of around 132km, it has around 30% dirt, but easy stuff, there are plenty of tougher trails if you want to go look for them on the outbound section

So we headed out from Morelia and quickly got off the #15 main road and onto back roads, heading thru little villages like Cuto de la Esperanza and Tzintzimacato Grande and Tzintzimacato Chico, there was a little dirt prior to this but its here where some dirt started and the fun too.

If you want to see authentic rural Mexico and meet amazingly friendly locals, this is a good place to start if you hadn’t found them already. 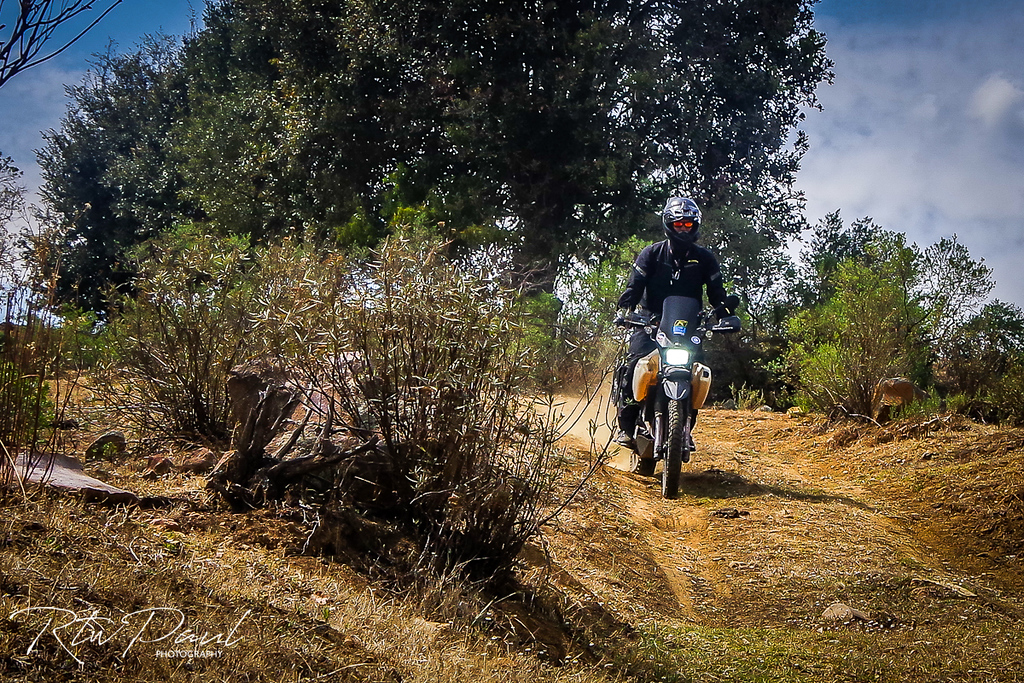 Planning to go deeper into the hills after talking with the locals and them telling us it is a lot of private lands here but we were welcome to ride ANYWHERE we wanted, just to leave the gates as we find them. Cool…

A flat in the middle of nowhere on a tire that could be an issue to get off! In case you didn’t read the post about a tire reviews its here from a few pages back, right now we have MotoZ Tractionator GPS tires on both bikes front and rear.

I keep tools and a spare on the bike for just this reason, riding with no luggage so we won’t get stranded, a spare rear tube on my fender bag and a front on Egle’s bike. I included writing about this puncture because I was amazed/ happy how easy this tire was to work with when I was expecting major issues. It dismounted easily, remounted just as easy and to my surprise I had zero issues getting it to bead

Our plan for the day was some dirt, ride thru a few small villages and stop in the HUGE market in Patzcuaro to grab food to take back for dinner. Besides the puncture, it was all good, we were a little behind but no big deal (we had a late start).

Then I look up… 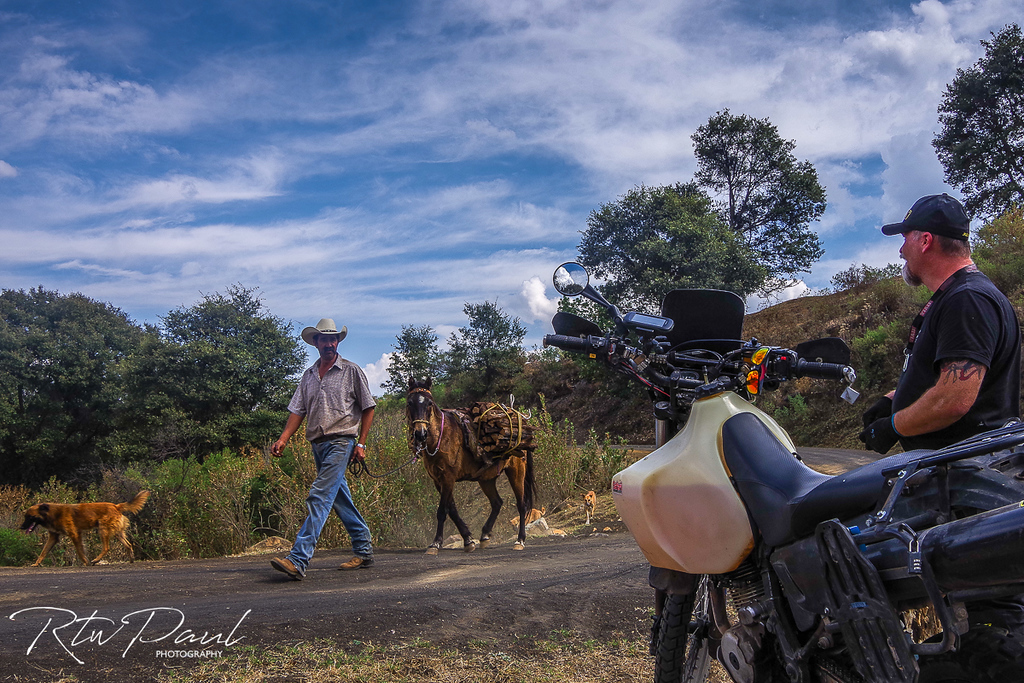 This local rancher who was walking back from the village with firewood stopped to check if we were ok? We chatted for about 30-45 minutes as I slowly packed my tools away, we talked about horses, life, and safety. He assured us again that this was a safe area and we were welcome to explore it all. He then told us about how he hosted students from the Netherlands on regular occasions in his ranch as he pointed a few hundred meters into the distance to a building that we hadn’t realized was even there.

Sadly don’t remember his name, and this shot is a little fuzzy but worth sharing

As we pulled off in an opposite direction, tire full of air

Not too much later we run into another friendly rancher and stop for a chat again and once again such a nice guy, reinforcing the safety of where we were. He had an interesting story…he was a US citizen and because of the heat of the Mexican summers in this area he spent them in Pennsylvania helping the local farmers in that state tend to their crops…but his heart was right here, “this is home”, he told us!

our day now significantly shorter we rode towards Tzintzuntzan a small town on Lake Patzcuaro, where we would have ridden around if we still had time, but for us, it was where we need to make a left to Patzcuaro. What we didn’t know was there is a market here and if you ride the direction we did you have to ride right thru the market, that went on for literally 3km. We were so taken back from all the sights, smells and sounds we forgot to take photos…sorry. Actually, a video would have been even better.

By the time we hit Patzcuaro it was too late for the market so we grabbed a Pollo Asado and watched the world go by instead.

Don’t miss this area of Mexico, it would be a great loss if you did to meet some amazingly friendly people that break the stereotype that the western media has put on them.