We leave the Vicuñas and the Volcano behind 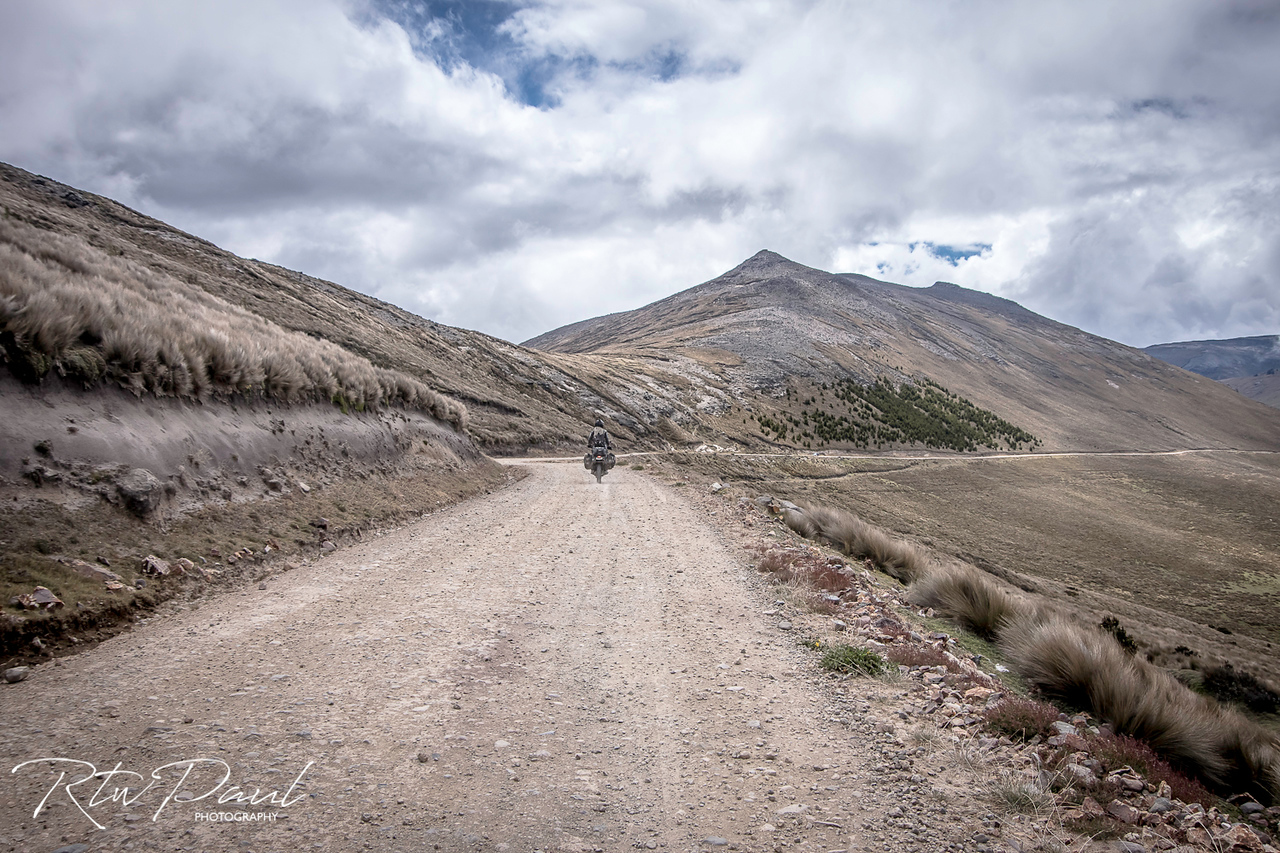 it’s a simple dirt road headed to the town we’re headed to Salinas, according to the map, nothing between the volcano and the town and you can see why; realistically why/ how would anyone want to live up here

We ride along as far as you can see in the above shot and there is small figure walking towards us, as we get closer we see its a little girl, maybe 5-years-old, we stop to check on her to make sure she is OK out here all alone, there is not a soul in sight

i’ll let Egle take up the story from here…

Riding a remote desolate dirt track somewhere around the Chimborazo volcano in the Ecuadorian Andes, Paul and I were talking how remote it felt. The track ran along the endless green highland grasslands and hills, zigzagging around jagged peaks and crossing small valleys. It felt like we were the only humans on Earth: the howling winds ruffled the grass, and there was no sight of any human activity – no houses in the distance, not even a pasture fence.

Suddenly, turning a corner, we saw a tiny figure walking down the dirt road. As we rolled towards the little silhouette, we realized it was a small girl wearing a traditional Andean costume. She held a tatty rope in her hands.

“Where are you going?”, – I asked the little girl. She seemed about five years old.

“To fetch my llama”, – she said, looking at me incredulously. Of course, where else!

“What’s the name of your llama?”

“Jimango”, the little girl replied, all business-like. She was five and all alone in the highland pampa, and she was going to fetch Jimango the llama.

I offered her a Kinder egg – I keep those in my tank bag just for such occasions. The little girl took one and looked at me, questioningly. I opened the egg and showed her a tiny toy inside. The girl wasn’t impressed; she had to go get Jimango – there was no time for toys. 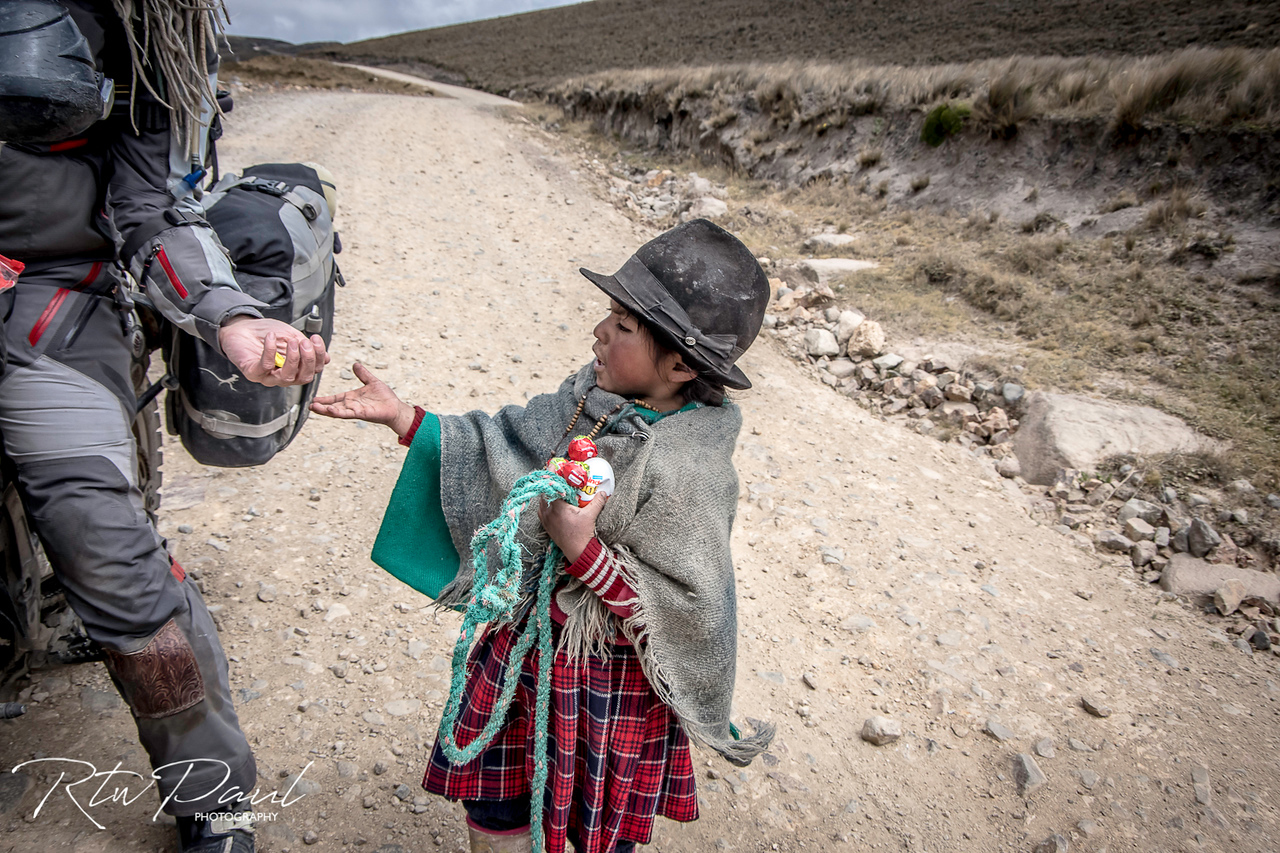 “And this part is all chocolate”, – I told her. Unsure, the little llama herder dug her filthy little fingers into the egg, scooping up the chocolate and tasting it. She smiled. 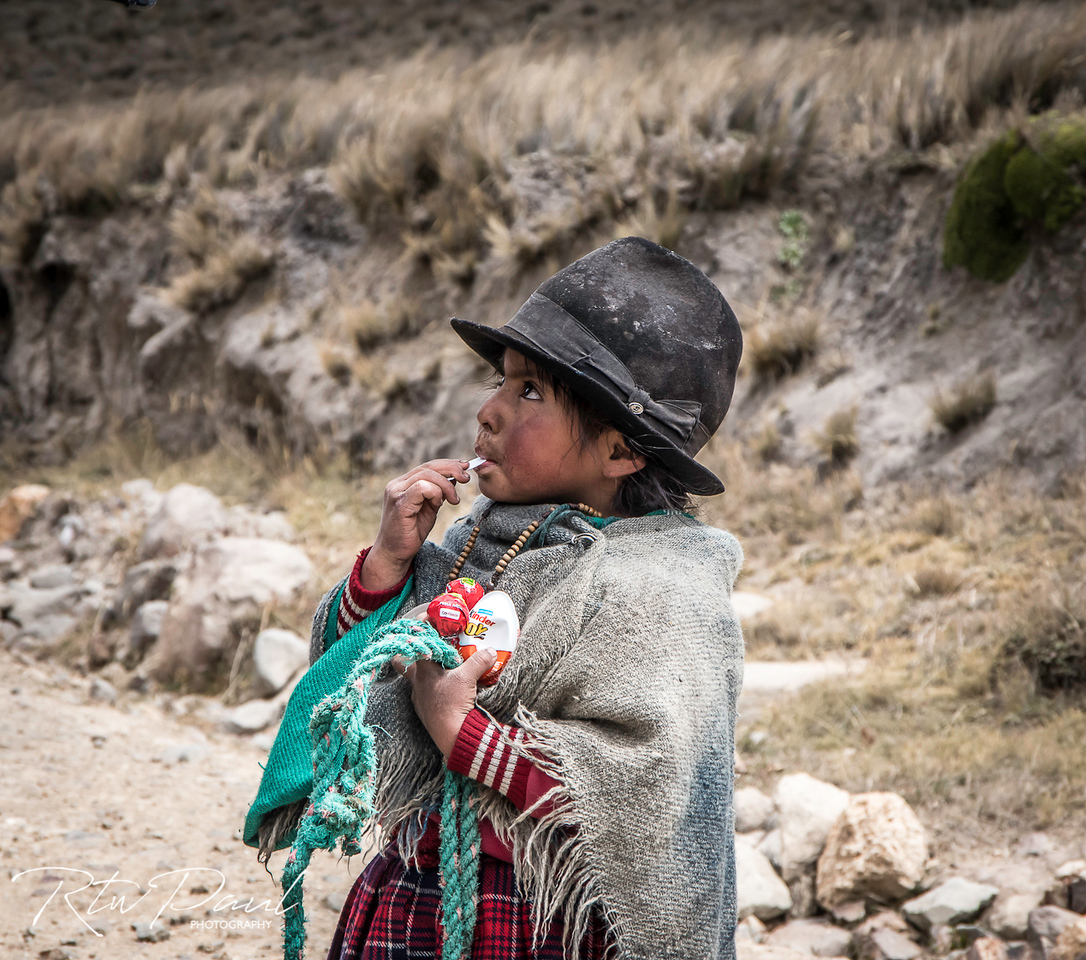 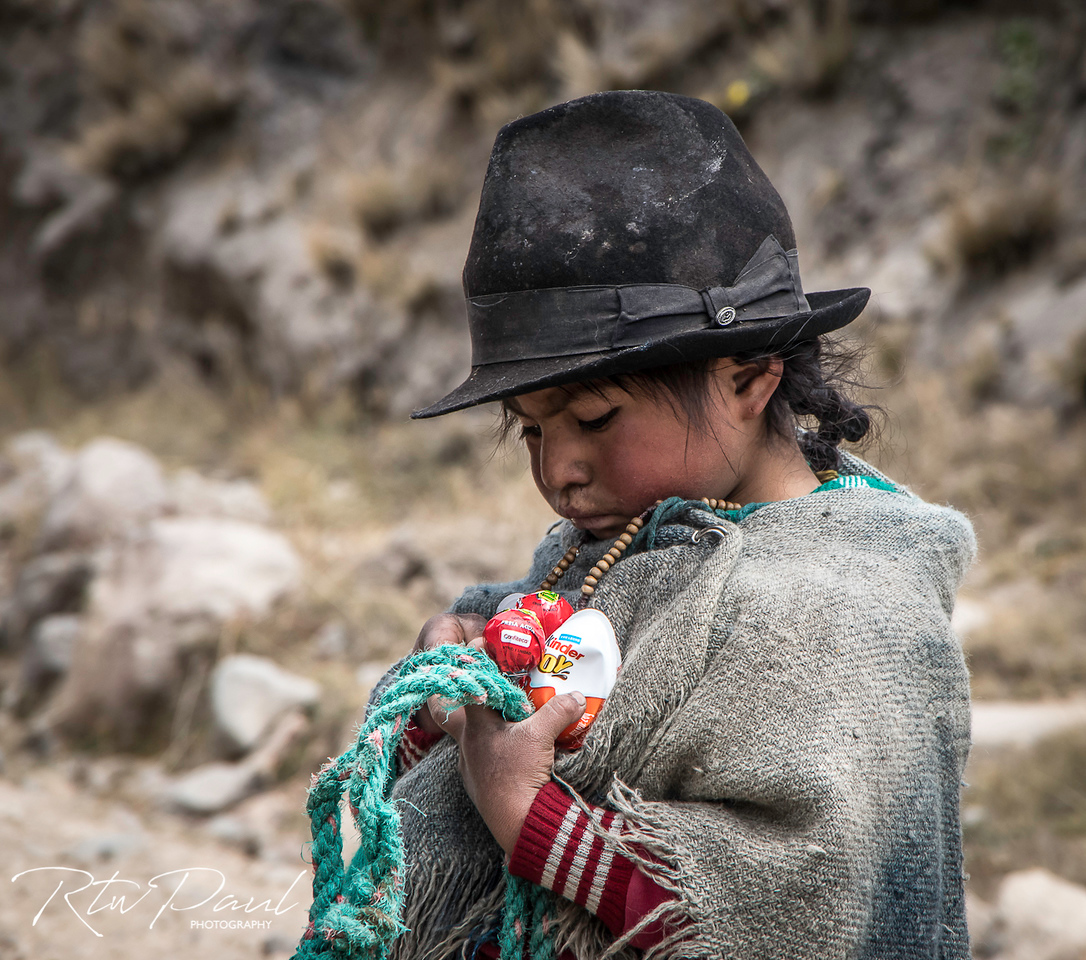 Every year, many indigenous highland people migrate towards the cities in hopes of a better life. The little girl’s mother, it seemed, was no exception.

Tucking her Kinder eggs under her poncho, the little girl nodded and marched off. Jimango was waiting.

I watched her in tiny silhouette in my mirror until she disappeared.

We found her village – a small settlement of maybe ten or fifteen houses – some two miles later.
Adventure riding isn’t always about you, it’s about the people you meet along the way and how a 5-year-old girl can be your inspiration for the day, hell even for the month…I’ll let you dwell on that, and think about your daughter/ sister/ niece at 5 years old?

I used https://thetruesize.com/  to show size and detail of we are.

We’ve been in South America (Colombia and Ecuador) for 5 months this time around and got from Cartagena to Quito…but whats the blue stuff over the map?

It’s to show you scale, in size terms its taken us five months to ride from San Francisco to Tucson…did I say we travel slow and do lots of loops! How big is the US compared to South America? Some riders think its a similar sized land mass…nope.

As we pull into the little Puebla the first person we see is a lady and her llama, just ordinary stuff in the mountains

Before getting off the bikes we knew this town had more to see and needed more than an overnight…we ended up staying three!

We looked across the street and saw this…

“I have a right to live without Violence” – we never did find out what had happened to make these be painted, the town was very quiet about it, and probably rightly so

The Puebla is home to 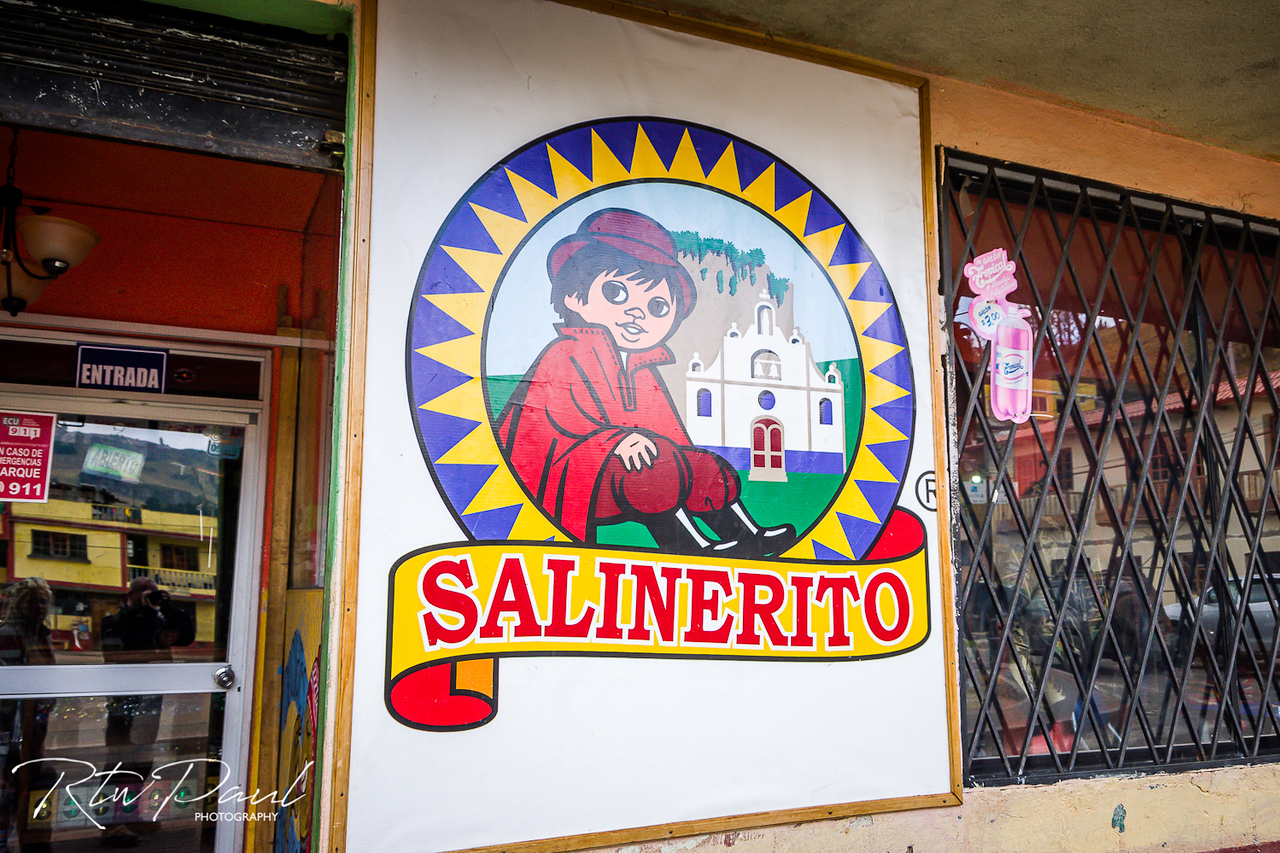 if you’ve been observant riding thru Ecuador especially in bigger towns its a store that you’ll find, and sells salt, chocolate, textiles and cheese from this region, they also export to many European countries 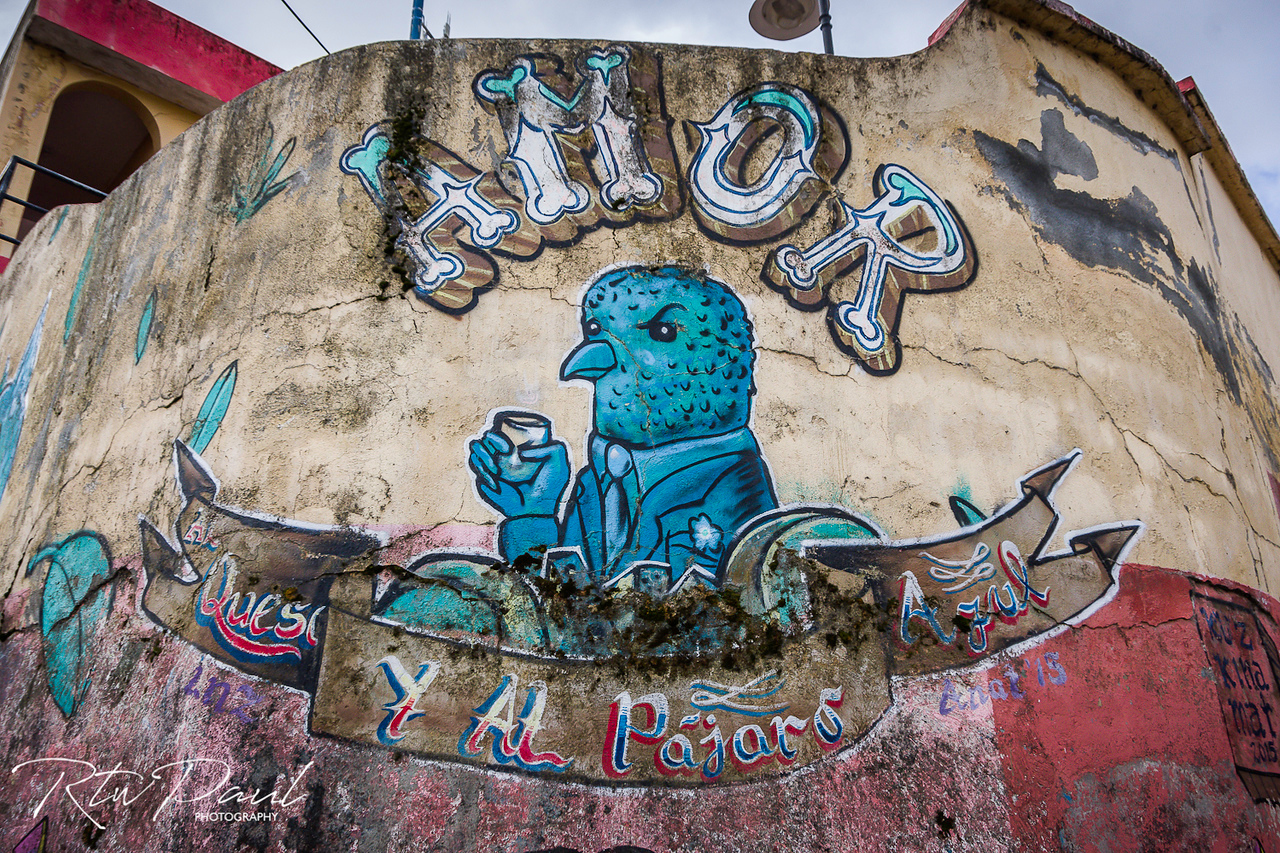 We unloaded, changed and grabbed a bite to eat and sat in the main square as a volleyball game started as the sun was slowly setting 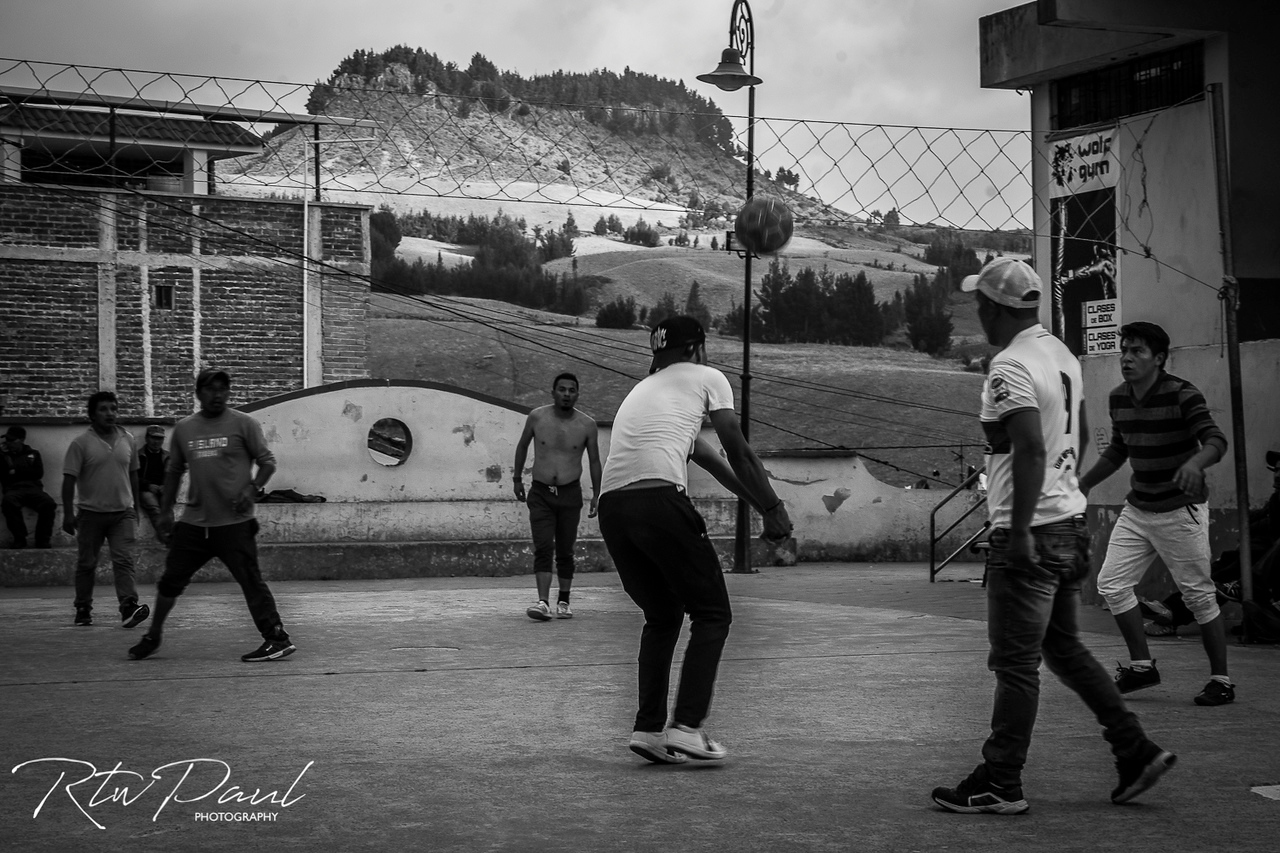 These guys played for a few hours none stop, no big thing right? Try running around for 2 hours at 12,000 feet! We went to the store and grabbed them all a bottle of water each, it was making us thirsty just watching. 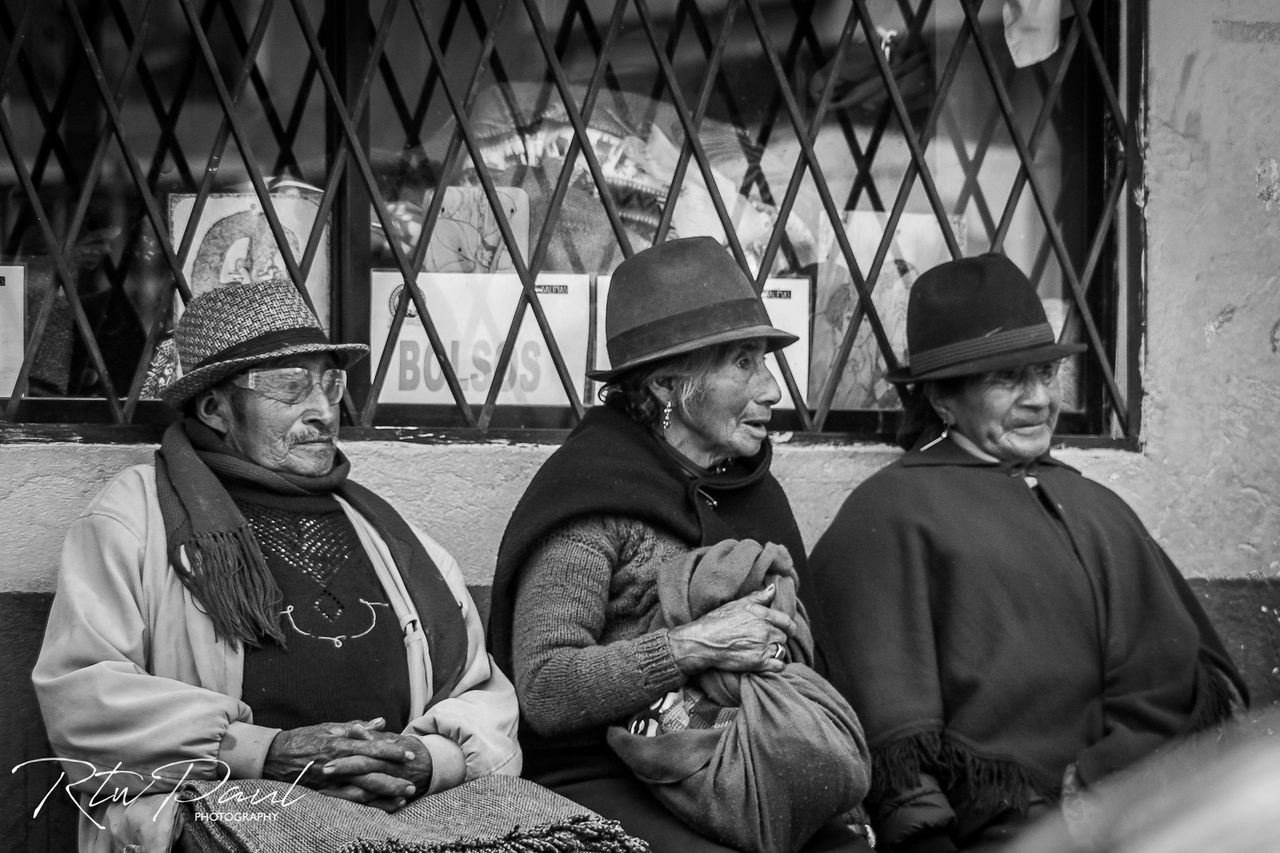 Over the next few days we hung out, chatted with the locals and got a feel for the place, to us it seemed like the friendliest place we’d been in Ecuador so far.

We chatted with a lady as we walked down a side street and asked about everybody being happy and she agreed, “it’s really simple, we are all the same, no one here is richer than any other person, we all know each other and treat each other with the respect we’d like to be treated ourselves.” – what a simple concept that so many places have forgotten

There is a ‘thing’ that happens every time we stop if there is a dog close by they all come directly to me, this little Puebla was no exception and the nice thing was all the street dogs looked very healthy

The town is most famous for its salt, and the ‘salt mine’ dominates the valley opposite the Puebla, the salt here is so good and full of minerals depending on specific content it can sell for as much as $50 a kg/ 2.2lbs 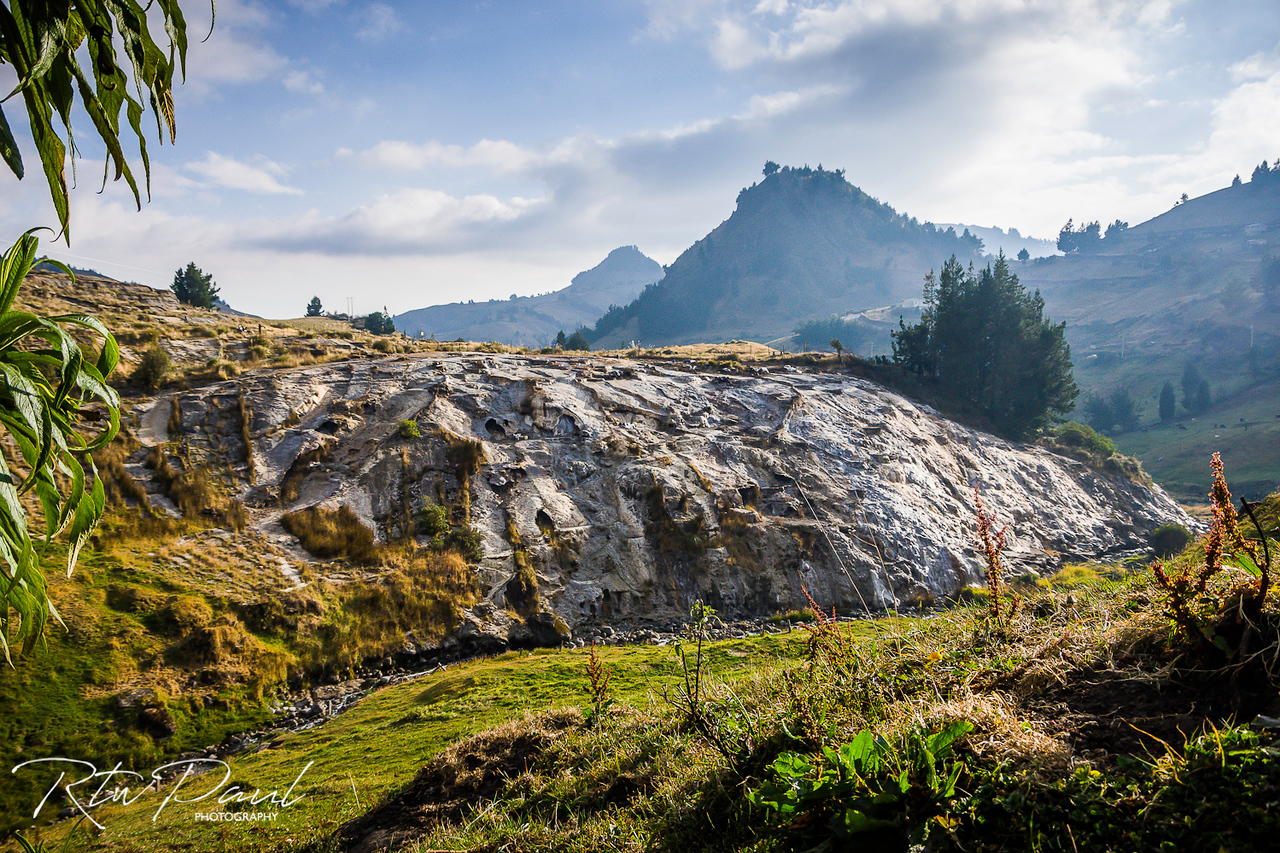 We were looking out towards it when a young lady came down towards with her llama on her way to collect salt water, we chatted and she told us a little but said there is a man to look out for, he knows the full story. Her llama posed for a few photos then off she went. 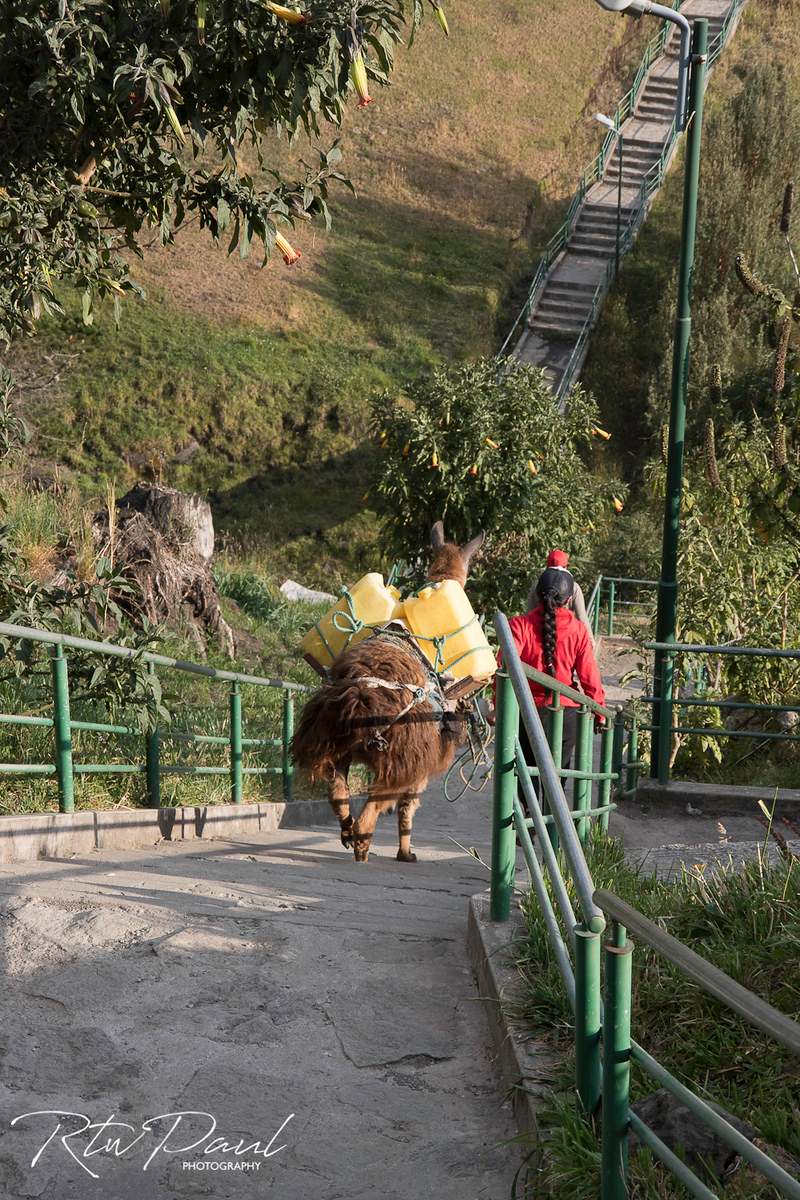 The following day we met Victor Yanchaliquin, who was formerly a fruit and vegetable salesman, a shop owner, a shaman, and natural medicine doctor and now retired. He told us that this mine is documented to be working for the last 400 but probably a lot longer, maybe thousands, his mother and grandmother both worked the mine, but no men did.

The women would bring water that came from a spring and then move it by hand in the to the various smaller pools via little channels carved in the rock face. 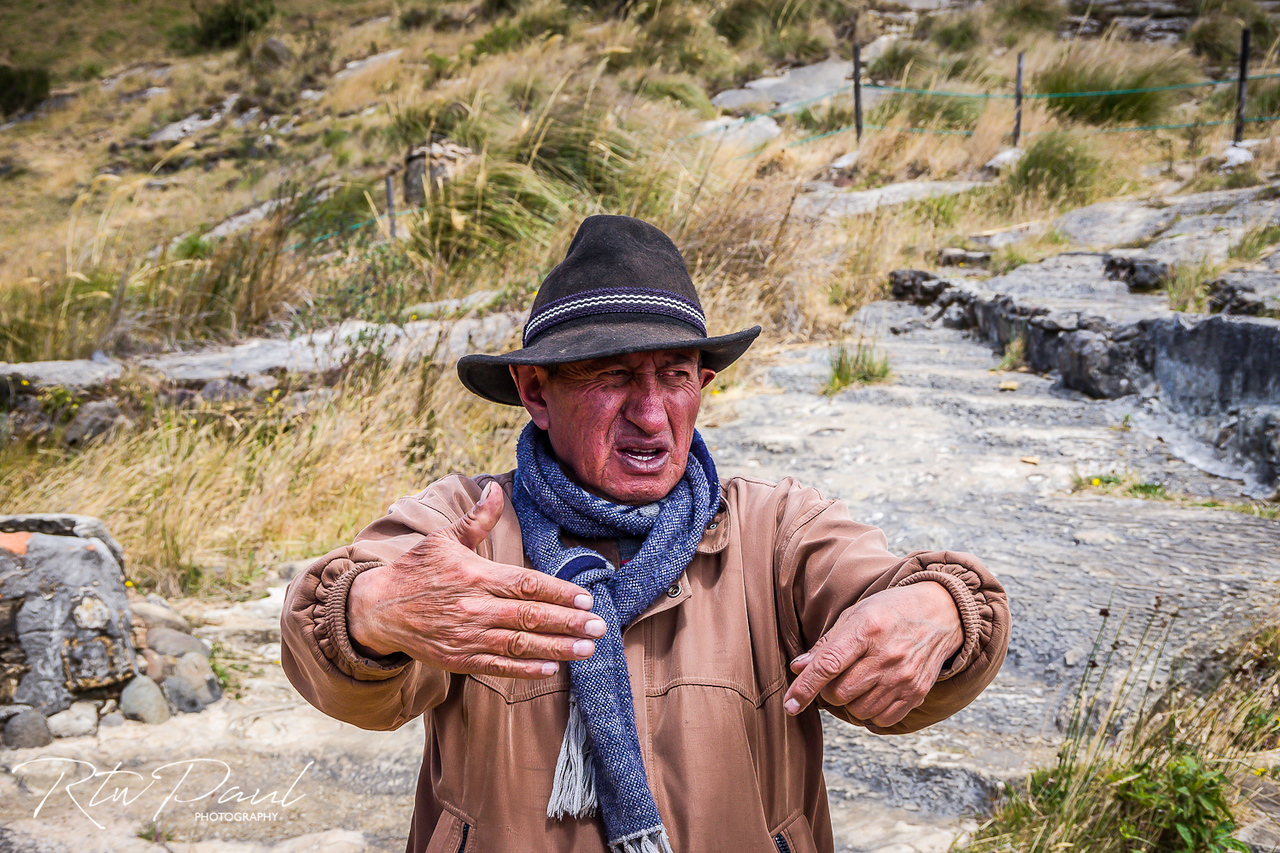 The minerals that are left 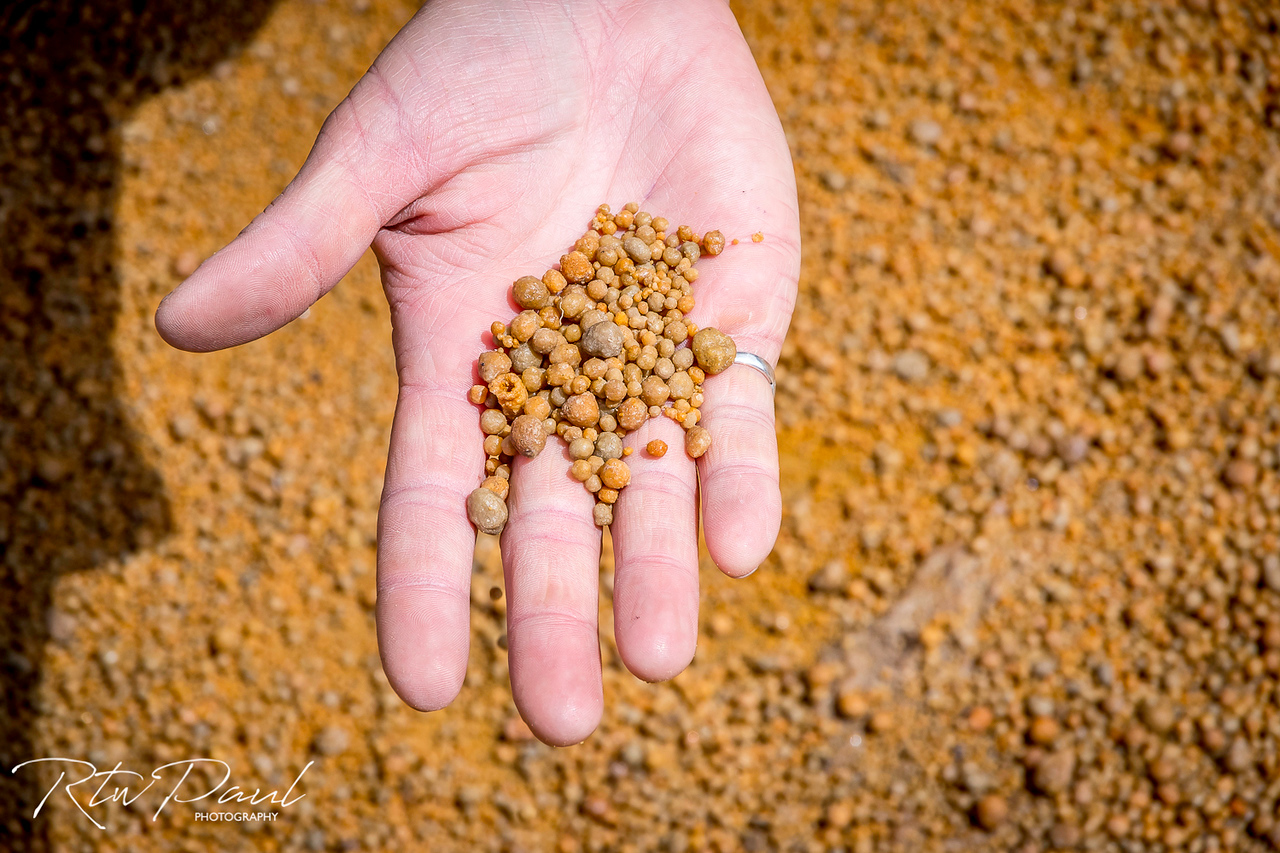 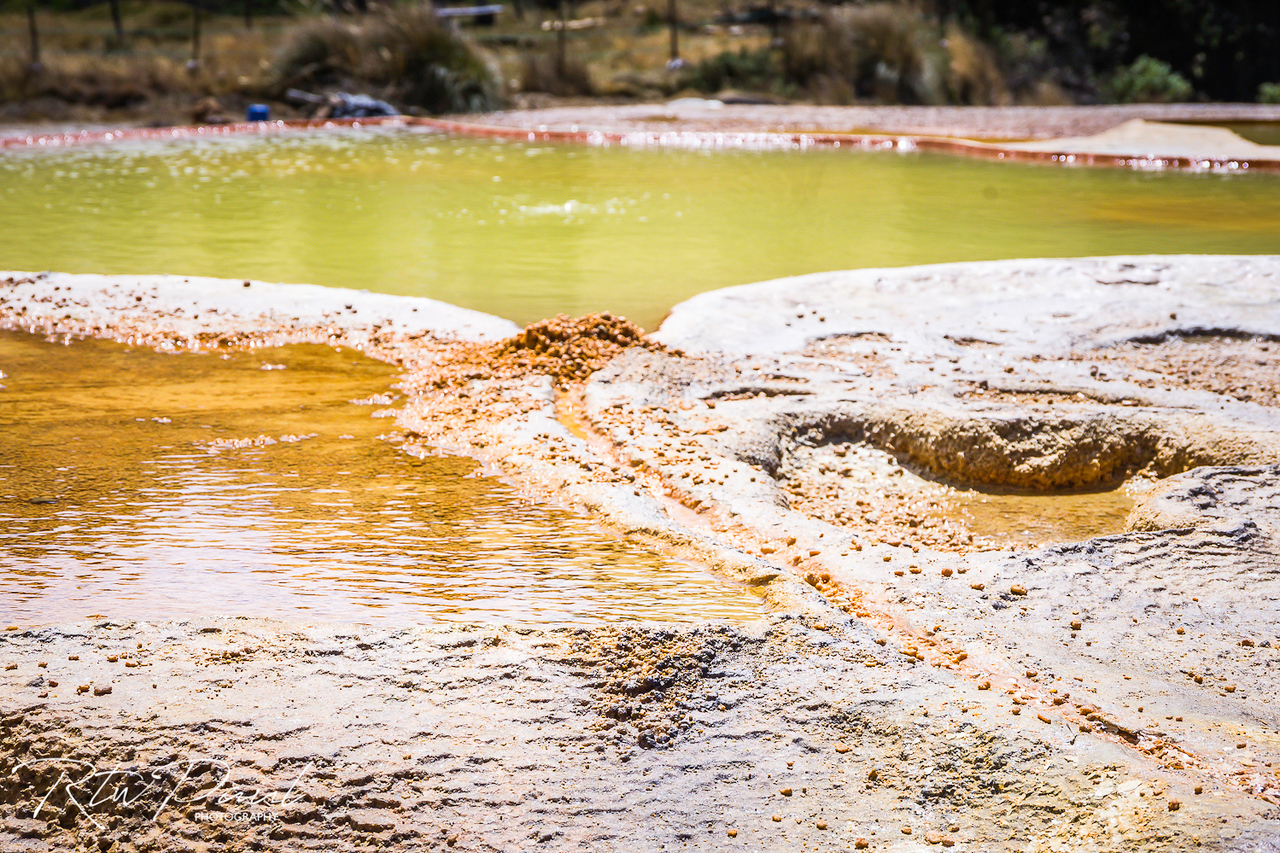 They had an ingenious way to know when the salt water was ready, they would put a coin in the pool and if it sank it was good, if it didn’t it wasn’t

****edit, just found notes, he was using a coin to demonstrate, an egg was used to see if the water was ready, not a coin. 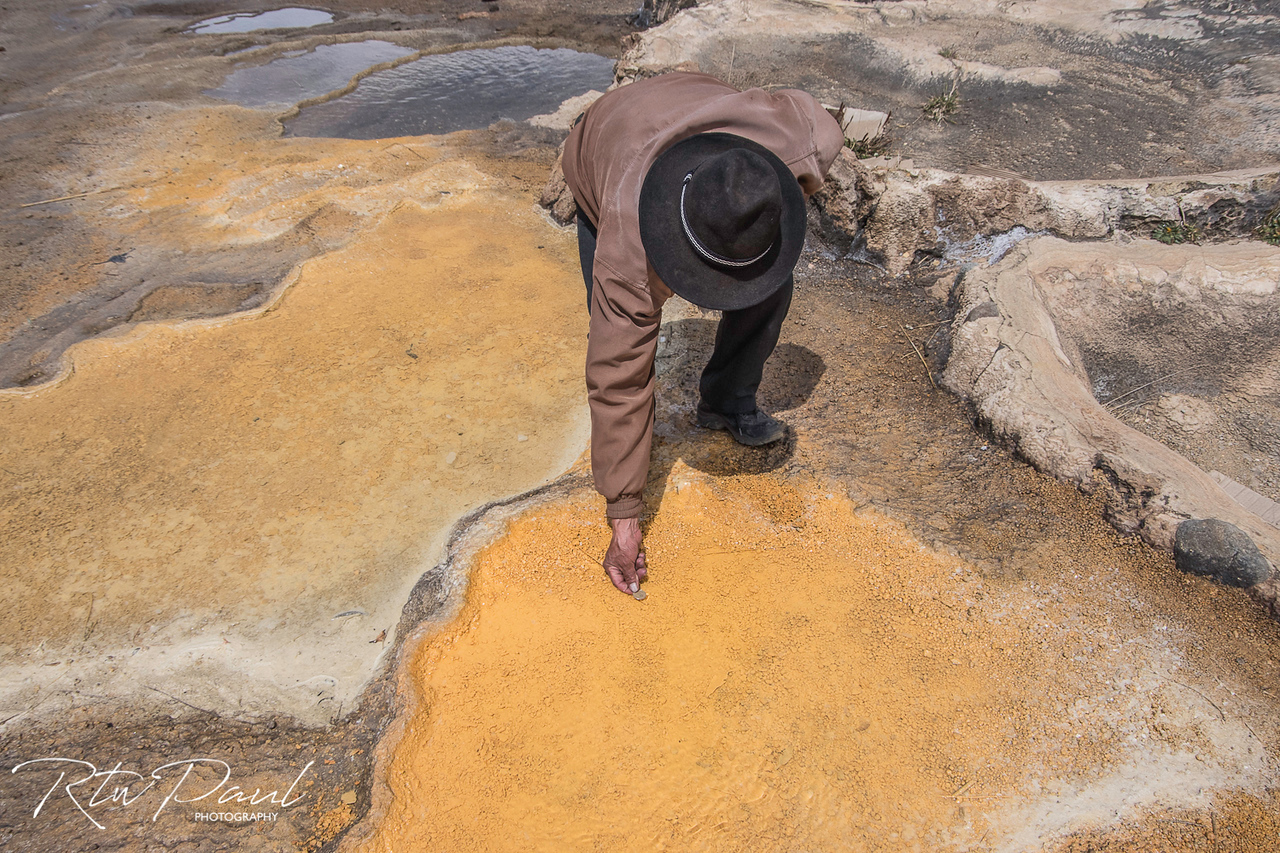 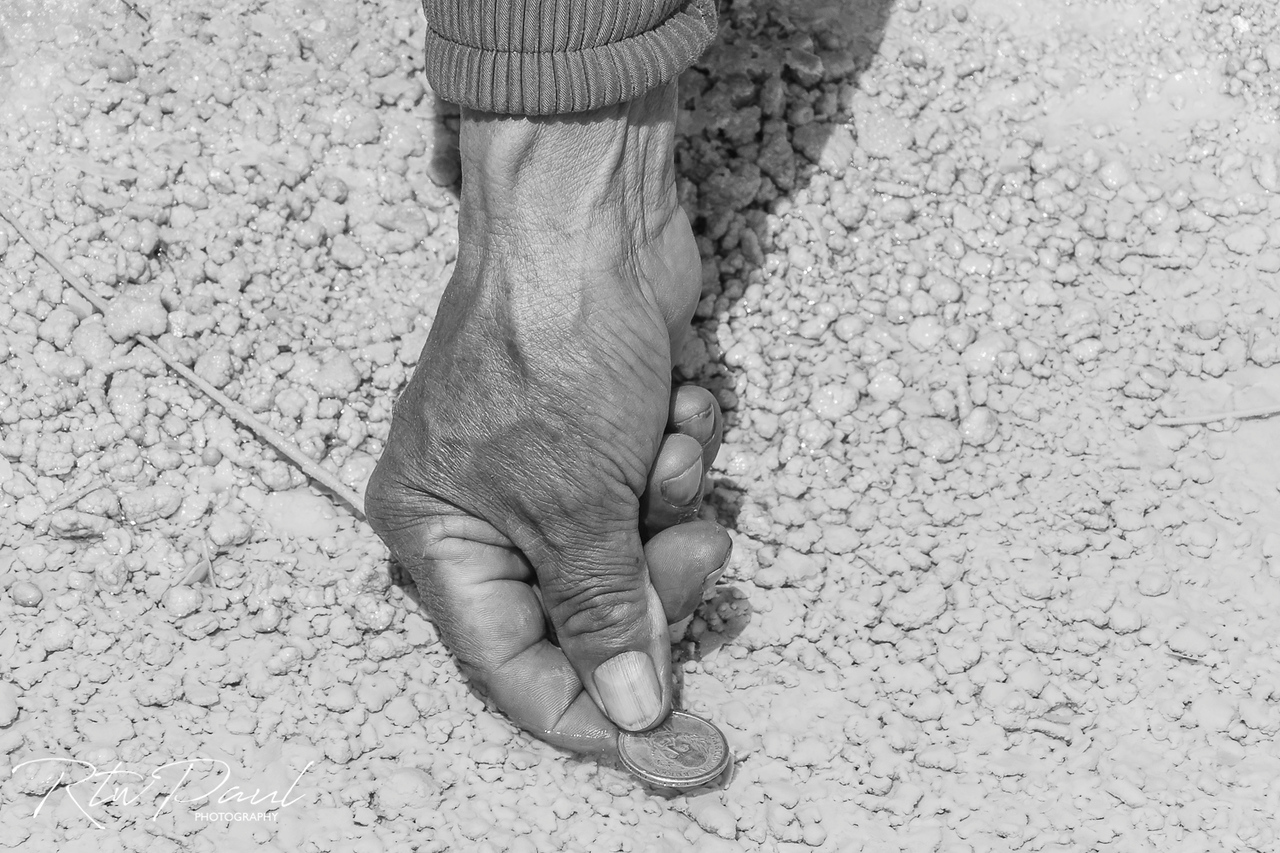 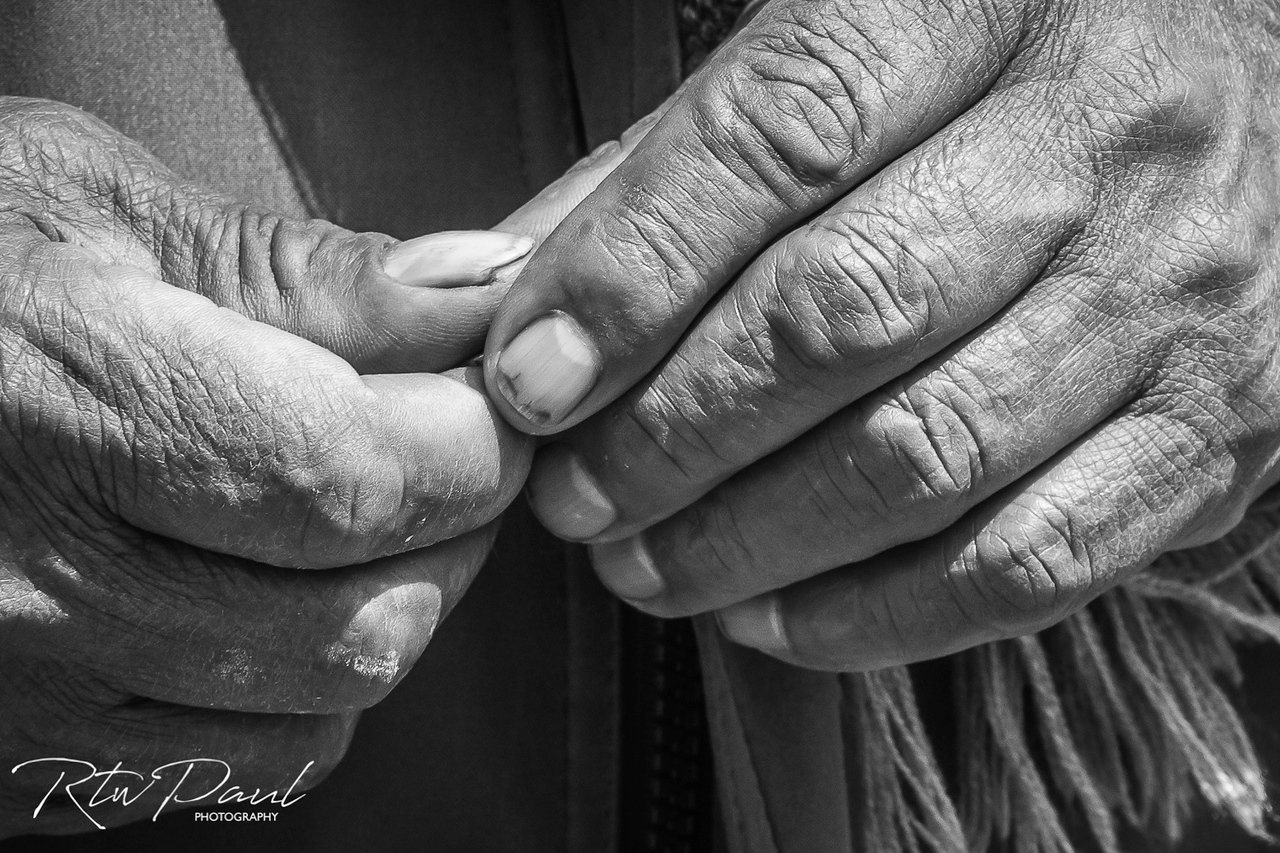 …but what of the men? They had specific jobs, farming, hunting and collecting firewood, the salt process was so big at one time there were massive pots to boil all the water away and leave just the salt, now only one remains, an old lady runs it and we never got to meet her. 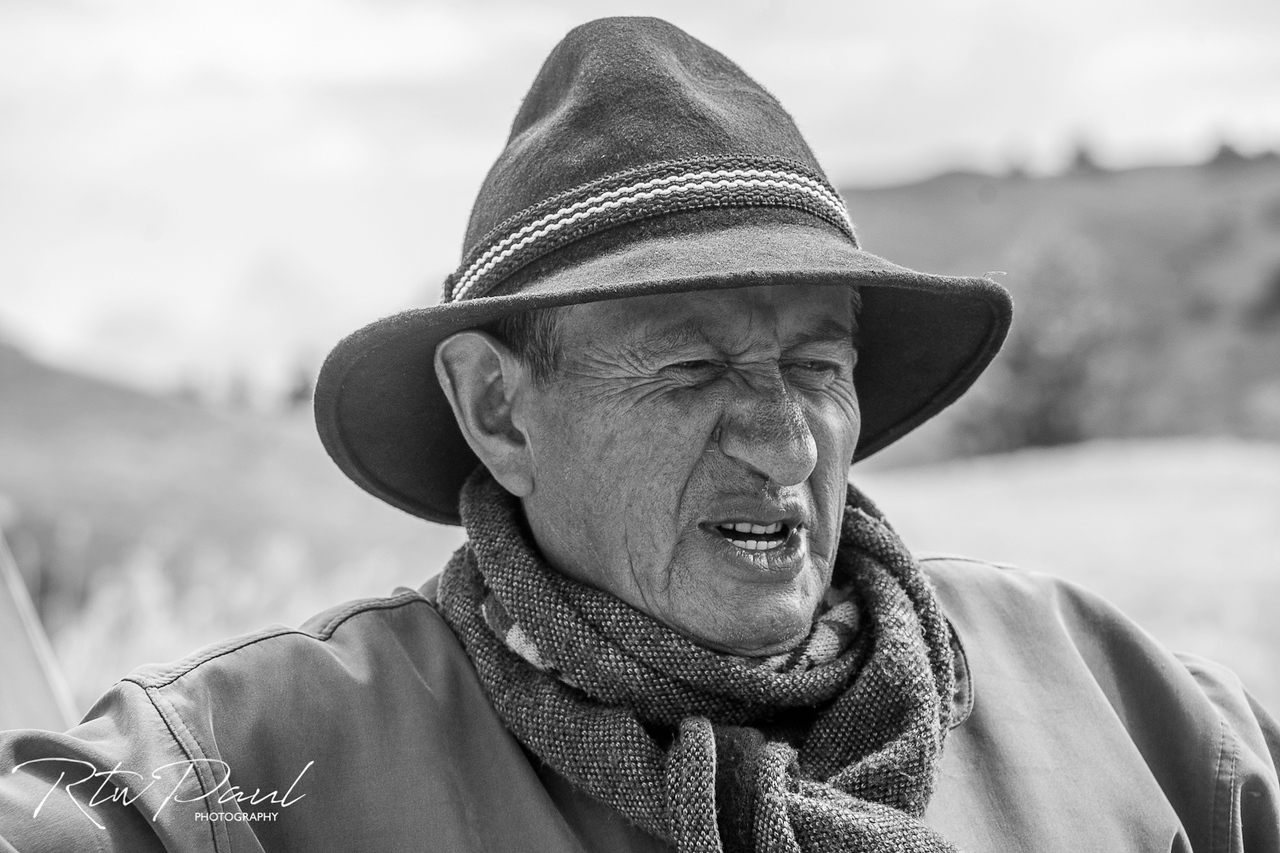 This will give you an idea (a little blurred)

We made our farewells and he wandered off… 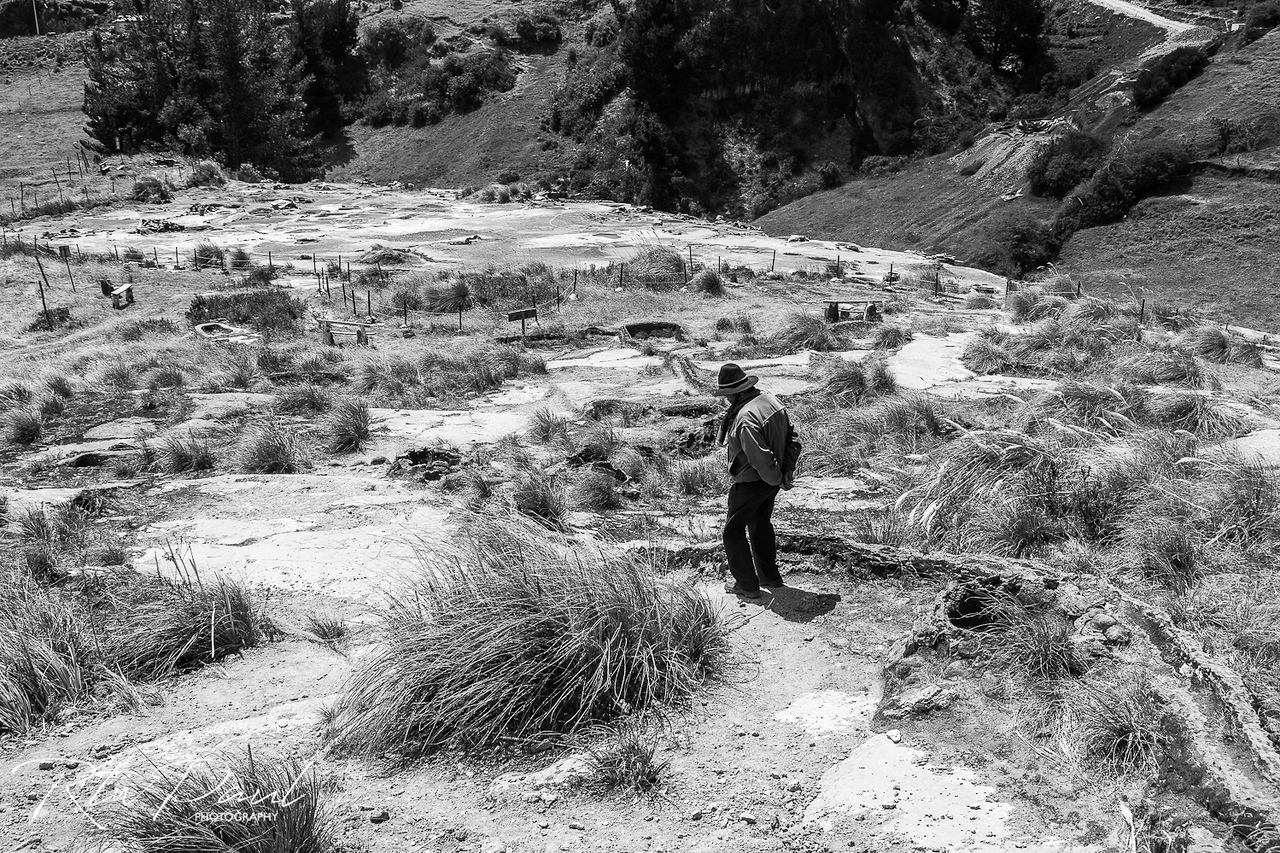 One thought on “Ecuador Offroad – Part 2”